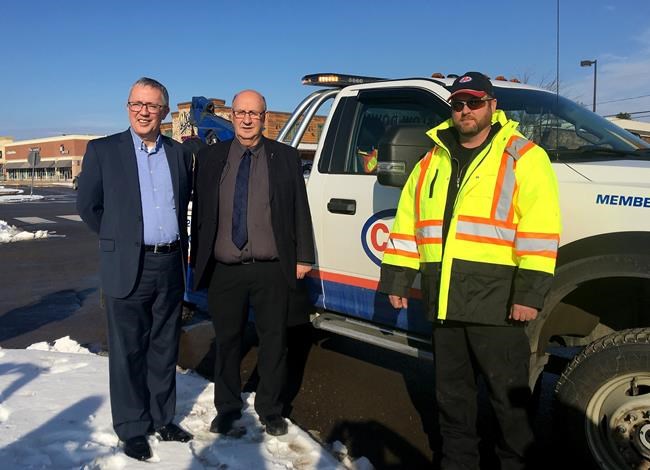 FREDERICTON — The New Brunswick government is introducing a series of changes to the Motor Vehicle Act in an effort to improve safety on the roads.

Under the changes, tow trucks, highway maintenance vehicles and utility vehicles with flashing lights will be added to so-called "Move Over, Slow Down" provisions.

Until now only police, fire and ambulance vehicles were covered by the provisions. New Brunswick is the last province to add tow trucks and other vehicles.

Carl Urquhart, New Brunswick's public safety minister and a former police officer, says during his time in uniform he saw too many cases where emergency personnel were at risk when stopping on the side of the road.

"I can remember the door being taken off a police car. A good friend of mine in the RCMP got jammed between a police car and a vehicle, and I've been to funerals outside of New Brunswick for members who were hit," Urquhart said Tuesday.

Last year, the widow of a Nova Scotia Mountie who was struck by a van while helping motorists change a flat tire pushed that province to expand its move-over law.

RCMP Const. Frank Deschenes was killed when a cargo van plowed into his cruiser and an SUV he was assisting on Sept. 12, 2017, in Memramcook, N.B.

Andy Aker, co-owner of Capital Towing in Fredericton, said while the tougher rules are welcome, it will take education to get drivers to slow down and move over when emergency vehicles are stopped.

"Francis Deschenes was killed. He was in a police cruiser with red and blue lights. Maybe this is part of his legacy that this is being changed and this law is being toughened up," Aker said.

Gary Howard, vice president of communications at CAA Atlantic, said he's also pleased with the tougher rules but new signage will be needed to get drivers to improve their habits.

He said it can be very dangerous for tow truck drivers.

"We have probably a couple thousand close calls across North America at CAA and AAA every year, and about 100 fatalities. This is a wonderful move by the minister and his department," he said.

Under the proposed amendments, introduced Tuesday in the legislature, the maximum speed in situations of Move Over, Slow Down will be half the posted speed limit.

New Brunswick will also double the fines for distracted driving to $280 and for passing a school bus with its red lights flashing to $480.

This report by The Canadian Press was first published Nov. 26, 2019.