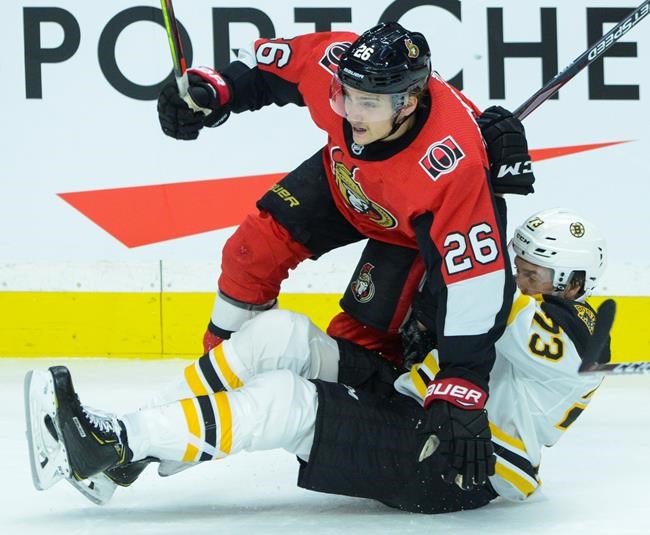 OTTAWA — The Ottawa Senators found plenty of positives in a 2-1 loss to the Boston Bruins Wednesday night.

Having outplayed Boston for much of the game, the Senators would have preferred to come away with two points, but they still feel there was much to like from their game against the league-leading Bruins (17-3-5).

“I thought we worked really hard,” said Senators coach D.J. Smith. “We made a couple mistakes and they ended up in our net. Some real good players of theirs scored and we just haven’t found a way to score on our chances, but I don’t know if we can play much better through two periods.”

Through 40 minutes of scoreless hockey the Senators (11-13-1) were the better team as they held the Bruins to just 10 shots, but couldn’t hold them at bay through the third.

Thomas Chabot scored the game's first goal 41 seconds into the final frame as he took a pass from Chris Tierney at centre and broke past two Bruins to fire a wrist shot far side.

The lead was short lived as Marchand tied the game less than five minutes later and Chara put the Bruins ahead with his fifth of the season 8:45 into the third, which held up as the winner.

“We had them,” said Chabot. “I think we played real well and halfway through the game they only had like six shots or whatever it was on net. It was a good game. Obviously, we made a little mistake on that second goal in our own zone and it ended up in our net. I think we still did a good job (Wednesday)."

Tuuka Rask was impressive for the Bruins making 33 saves, while Anders Nilsson was solid for the Senators stopping 19 shots.

The Bruins, winners of their last five, have now won 10 straight against the Senators. The loss snapped Ottawa's five-game winning streak on home ice.

The Senators were 0 for 2 with the man advantage. Having scored just one power-play goal through its last two games, both losses, Ottawa realizes the importance of finding a way to score on the power play.

The Senators' power-play unit is ranked 31st in the league.

“I don’t know if there’s pressure, but I think there’s expectation of us,” said Tierney. “I think we hold ourselves accountable and we know it’s obviously not good enough to not be scoring too often on the power play. It could have been a difference for us (Wednesday).”

The game remained scoreless after 40 minutes, but there were chances at both ends.

The Senators outshot the Bruins 9-3 in the first period and 15-7 in the second.

Chara, who spent four seasons in Ottawa, was given a standing ovation in the first period when the Senators congratulated the Bruins captain for reaching 1,500 games played. Chara reached that milestone earlier this month.

“It was something I didn’t expect, usually I get a little heads up before the game,” said Chara. “It’s such an overwhelming reaction. I only have great memories. The fans are so supportive of this team and this city and I made a lot of close friends that I’m still in touch with until today. I can’t thank them enough. Every time I played for this team they showed 100 per cent support. They’re great fans.”

Ottawa has lost back-to-back games after winning three straight. The Senators play the Minnesota Wild on Friday in the first game of a five-game road trip.

Boston, which was coming off an 8-1 win over the Canadiens in Montreal a night earlier, hosts the New York Rangers Friday afternoon.

Notes: The Senators recalled goaltender Marcus Hogberg as Craig Anderson was kept out of the lineup for precautionary reasons. Erik Brannstrom returned to the lineup for the first time since a hand injury Nov. 16. ... The Bruins signed Charlie Coyle and Chris Wagner to six- and three-year extensions, respectively. Brendan Gaunce made his debut with the Bruins Wednesday