Opposition growing to use of notwithstanding clause for vaccination bill 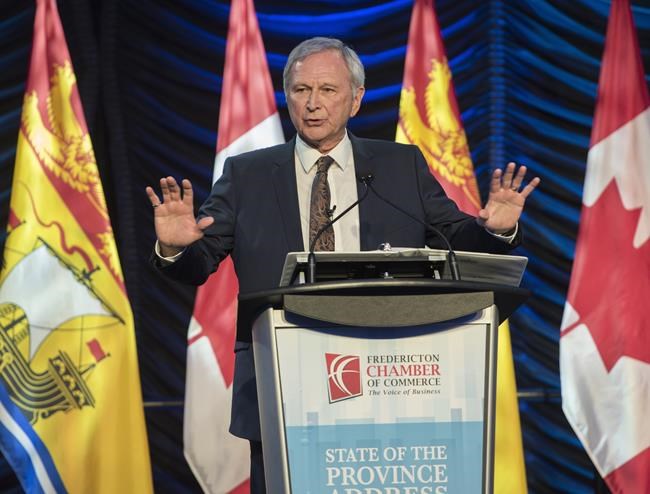 FREDERICTON — Opposition politicians say New Brunswick's Progressive Conservative government is being too heavy-handed by invoking the notwithstanding clause to shield mandatory vaccination legislation against charter challenges.

Education Minister Dominic Cardy says the proposed law — making vaccinations mandatory for children in schools and daycares unless they have a medical exemption — is needed to protect students against outbreaks of diseases like measles.

But People's Alliance Leader Kris Austin said while he supports vaccinations, he's not ready to support a bill using the notwithstanding clause.

"We're kind of using a nuclear button here on an issue that I don't think warrants it. That's my concern," Austin said Wednesday.

"Government has to convince me that there is a crisis here, or a potential crisis, and I'm not convinced that's the case right now," he added.

Section 33 of the Canadian Charter of Rights and Freedoms, which allows governments to override parts of the charter, is rarely used.

The new rules, which would take effect Sept. 1, 2021, were introduced this year amid a measles outbreak in southern New Brunswick.

Cardy said New Brunswick's proposed vaccination rules are in line with similar decisions elsewhere in the world, including Germany, where starting next March measles immunization will be compulsory for all children and staff in kindergartens, schools, medical facilities and community facilities.

Green Leader David Coon said he won't support the bill as long as the notwithstanding clause is used. "It is unprecedented and should never have been contemplated," he said. "If we can amend the bill to remove it, then that's another matter."

But Premier Blaine Higgs said government lawyers advised that unless the notwithstanding clause was used, the bill would not stand up to a court challenge. "We would be challenged and ultimately lose," Higgs said.

Higgs said he's open to listening to suggestions for amending the bill, as long as it means that children will be protected.

Liberal member Robert McKee said the government has yet to prove to him that mandatory vaccinations are necessary.

"What we want to see is the evidence that the rates of vaccination do not meet the 95 per cent for herd immunity," he said. "If those rates are not met, then at that point in time we can discuss if a mandatory vaccination regime is necessary. At this point we don't have that information."

Liberal member Cathy Rogers stood and gave a public apology to Cardy Wednesday after an exchange on social media earlier in the week in which she said Cardy was being "Hitler-ish" in his approach on the vaccine issue.

"In my comment I crossed the line," she said in the legislature. "I do deeply regret having made the comment."

Cardy said he accepts the apology. He said too much time has been spent listening to anti-vaxxers and conspiracy theorists. He said vaccines are a safe and proven way to prevent the spread of many potentially life-threatening diseases.

The bill is expected to be debated in the coming weeks.

This report by The Canadian Press was first published Nov. 27, 2019.

Note to readers: This is a corrected story. A previous version identified Liberal MLA Robert McKee as Mike.