Despite U.S. calls for more, Canada’s defence spending set to stay the same 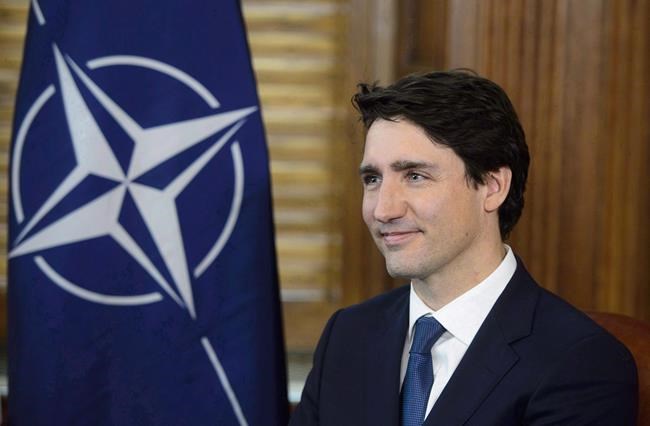 OTTAWA — Prime Minister Justin Trudeau is likely to face questions from other leaders of the NATO military alliance next week as new figures show Canadian military spending is expected to remain stagnant this year.

All NATO members agreed in 2014 to work toward spending two per cent of their gross domestic products on defence within a decade, a pledge that has taken on added significance thanks to U.S. President Donald Trump.

Yet new NATO figures published Friday estimate Canada will spend around 1.31 per cent of its GDP on its military this year — the same as last year. That leaves Canada 20th out of NATO's 29 members in terms of GDP spent on defence. Nine NATO members met the two per cent target.

Allies also agreed in 2014 to direct 20 per cent of their defence spending toward equipment. Canada's proportion is expected to increase to 13.3 per cent from 11.9, but it stands to be ranked 24th out of 29 members.

The topic of defence spending is expected to figure prominently in discussions when Trudeau and other NATO leaders gather in London next week for the 70th birthday of the alliance, which was created in 1949 to protect North America and western Europe from the Soviet Union.

Trump has driven much of that discussion by publicly berating some European allies for not spending more on their own defence, while he and his administration have also publicly and privately expressed frustration with Canada's own military investments.

"And he has conveyed that message very clearly to allies several times. But European allies and Canada should not invest in defence to please President Trump. They should invest in defence because we are faced with new threats and new challenges."

The federal government has suggested this country's military spending will increase substantially over the next decade as it starts to buy new fighter jets and warships, which together are expected to cost about $70 billion.

Yet the Liberal government's defence policy from 2017 shows spending reaching only 1.4 per cent of GDP by 2024-25, underscoring Canada's longstanding resistance to the two per cent target despite having agreed to it.

The government has instead repeatedly pointed to Canada leading a battlegroup in Latvia and providing military trainers in Iraq, fighter jets in Romania and a frigate in the Mediterranean as a better measurement of its commitment to the alliance.

According to the Prime Minister's Office, Trudeau "reiterated Canada's steadfast commitment to the alliance and our ongoing contributions to key NATO missions across the spectrum of its operations" in a phone call with Stoltenberg on Friday.

To meet the two per cent target, Canada would need to spend $33.4 billion — or about $11 billion more — on defence this year.

"The newly released numbers by NATO make it clear that under Justin Trudeau, Canada is not meeting our NATO commitments and he has no plan to reach them," Conservative defence critic James Bezan said in a statement Friday.

"The number of allies hitting the two per cent of GDP mark has gone from three to nine, but Canada still trails behind and our defence spending has stagnated for the last two years. It's embarrassing we are missing the mark on overall investments in our national defence."

Trump personally expressed frustration about Canada's defence spending in a letter to Trudeau ahead of last year's NATO summit in Brussels.

"As one of our most capable allies and a leader in worldwide security, Canada's continued defence spending of less than two per cent undermines the security of the alliance and provides validation for other allies that also are not meeting their defence spending commitments," the letter said.

"At the summit, we must ensure alliance credibility by living up to our agreed commitments. I expect to see a strong recommitment by Canada to meet the goals to which we have all agreed in the defence investment pledge."

The Liberals actually changed the way Canada reports its defence spending to NATO when it unveiled their defence policy, largely to ensure the country's investments were being properly acknowledged amid U.S. pressure to spend more.

That change, which was approved by NATO, saw the government include the cost of some veterans' programs, deploying police on peacekeeping missions, coast guard operations and even computer support in the overall number.

This report by The Canadian Press was first published Nov. 29, 2019.