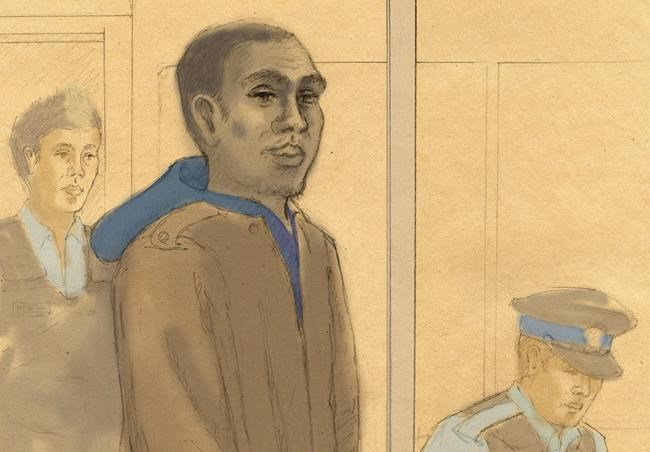 TORONTO — A man who opened fire in the crowded food court of a popular mall in downtown Toronto seven years ago, killing two people, was sentenced to life in prison on Friday.

The ruling was delivered in a courtroom about half a kilometre from the site of the attack, that also left six people injured. Christopher Husbands was convicted of manslaughter in the deaths of two young men in the June 2, 2012, shooting.

"He was criminally reckless as to how many totally innocent bystanders could be caught in the line of his fire," Justice Brian O'Marra said in his decision. "Could this incident have been worse? Yes, it could easily have been three, four, five or more people killed or wounded by his actions."

Husbands was also found guilty earlier this year of five counts of aggravated assault and one count each of criminal negligence causing bodily harm and reckless discharge of a firearm.

For those charges, he was handed seven concurrent sentences, of which he has four years left to serve. He'll be eligible to apply for parole after serving one-third of that time — sometime in the spring of 2021.

In crafting the sentence, O'Marra took Husbands' background into consideration, noting that the young man — who was 23 at the time of the attack — had been subjected to racism and poverty growing up first in Guyana and then in a poor neighbourhood of Toronto, where his circumstances led him to get involved with drugs and guns.

But in spite of those factors, O'Marra said he believes the prospects for Husbands' rehabilitation are good, noting the young man had also been involved in "pro-social activity," including volunteering.

This was Husbands' second trial in connection with the Eaton Centre shooting, after his conviction on second-degree murder charges was overturned on appeal.

Husbands admitted at trial that he was the shooter but his lawyers argued he should be found not criminally responsible due to mental illness.

The Crown acknowledged Husbands suffered from PTSD due to a stabbing months earlier but said he was carrying out a vendetta against his attackers.

The judge said the two men who were killed were involved in the attack on Husbands.

Ahmed Hassan, 24, died on the floor of the mall's food court and Nixon Nirmalendran, 22, died in hospital nine days later, the judge noted. Six others were hurt, including a 13-year-old boy who was shot in the head and survived, and a pregnant woman who was trampled by fleeing shoppers.

O'Marra said it wasn't clear whether Husbands was sorry for what he did, despite the fact that he apologized in court.

"Many years have passed since the deaths and injuries were caused by Christopher Husbands. His professed remorse in 2019 stands in contrast to what he wrote in letters to (a girlfriend) in 2012," the judge wrote. "His remorse today may be genuine. However, I find based on all of the evidence and information available that his remorse is ambiguous at best."

This report by The Canadian Press was first published Nov. 29, 2019.