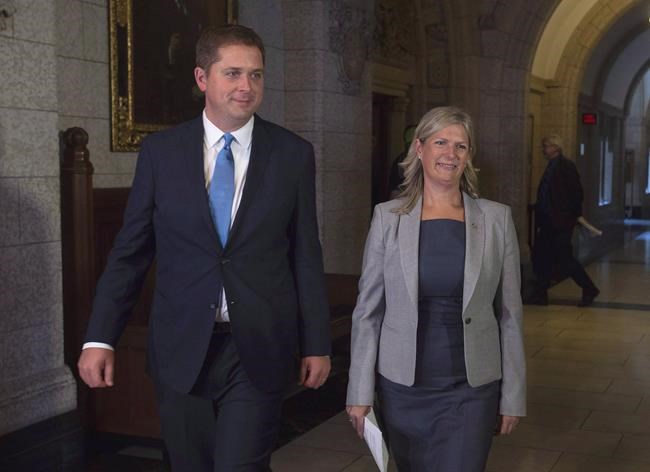 Andrew Scheer's second-in-command apologized Saturday after comparing the Conservative leader's decision not to march in a Pride parade to choosing not to take part in a St. Patrick's Day parade.

Leona Alleslev, who was named the Tories' deputy leader earlier this week, made the comments on an episode of the CBC News radio show "The House" that aired Saturday morning.

When asked if she had an issue with Scheer not attending Pride parades, Alleslev gave a response that drew online criticism.

"I think that's obviously his choice and we live in a country where that's his choice," she said, referring to Scheer. "Have we asked anybody if they've marched in a St.Patrick's day parade?"

Alleslev apologized for the comment on Twitter on Saturday afternoon, saying that the Pride parade is an important symbol in the fight for LGBTQ rights.

"I did not intend to make erroneous and hurtful comparisons — I apologize unreservedly," she wrote.

In another tweet, she said she's committed to being a progressive voice and ensuring equal opportunity exists in the Conservative party.

Over the summer, the Liberals lambasted Scheer for declining to participate in any Pride events and dug up 14-year-old video footage of him speaking out against same-sex marriage.

In August, then-public safety minister Ralph Goodale — who lost his seat in the October election — tweeted a short, edited video of an April 2005 speech Scheer gave in the House of Commons explaining his opposition to the Civil Marriage Act, which legalized same-sex marriage in Canada later that year.

Scheer has softened his stance on same-sex marriage since the debates over the Civil Marriage Act, supporting a move to erase the traditional definition of marriage from the Conservative Party of Canada's policy book at its 2016 convention.

Scheer has been touring the country to make his case to the party faithful that he should be allowed to continue to lead the Tories, even after losing the federal election.

He received a warm reception while speaking at the Alberta United Conservative Party's annual general meeting on Friday, but a contingent of MPs and other party members have been calling for his resignation.

He'll have a chance to fight for his spot at the party's helm at the Conservatives' convention in April.

Alleslev was first elected as a Liberal MP in 2015 in the Toronto area, but crossed the floor to join the Conservatives in September of last year.

This report by The Canadian Press was first published Nov. 30, 2019.