Council consensus: what premiers are hoping for out of Monday’s meeting 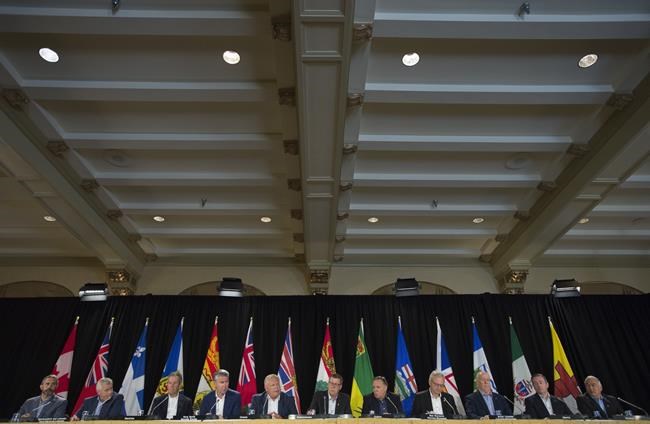 OTTAWA — Premiers of all the provinces and territories gather Monday in Toronto to try to shape a collective agenda for their relationship with the federal government, after an election that left the nation in a partisan patchwork.

Many of the leaders have had their own meetings since the October vote resulted in a Liberal minority government that has no MPs in Alberta or Saskatchewan, plus a resurgent Bloc Quebecois. Some have also met individually with Prime Minister Justin Trudeau.

Saskatchewan Premier Scott Moe, the current chair of the Council of the Federation, all but stormed out of his sit-down with Trudeau more than two weeks ago, insisting he'd heard nothing that gave him any confidence the Liberals were serious about addressing the concerns of the West.

But for the meeting Monday, he will try to seek consensus nonetheless, placing three topics on the table. One is developing amendments to the fiscal stabilization program, a mechanism that provides a financial top-up to provincial governments suffering economic downturns. He also wants to discuss the federal carbon tax and how best to implement the new federal environmental-assessment legislation, known by its legislative title of Bill C-69 — and as the "No More Pipelines Bill" to detractors such as Alberta Premier Jason Kenney.

"I think everyone is coming in with an open mind to have a frank and fair discussion in light of the results we saw on election night, which is why this meeting is coming together in the first place," Moe said ahead of the gathering.

"I'm truly hopeful we are going to come to consensus as premiers across this nation on two or three items and provide that to our federal government as some direction."

Moe had originally demanded, with support from Kenney, that Trudeau change the equalization formula, the broad-based program that aims to bring provinces' spending capacities into some measure of equilibrium via federal transfers.

Last week, however, Newfoundland and Labrador Premier Dwight Ball warned that wasn't going to fly around the federation table. Reworking equalization means taking from one province and giving to another and that's no way to achieve national unity, he said.

"Rather than pick a fight with the provinces and say, 'I want you to have less so we can have more,' that's not the right conversation," he said.

"We can be responsible enough to put together a new program that meets our needs," he said.

On Thursday, Moe had acknowledged equalization is a divisive topic. It's a long-term policy, with the formula locked in for years at a time. Though equalization still needs revising, he said, the shorter-term fiscal stabilization program is a faster thing to fix.

Kenney is on side as well.

Alberta received about $250 million from the program in 2016, which amounts to $60 per Albertan, the maximum the program allows. Alberta's finances have taken a huge hit from low oil prices, which have harmed its major industry.

At minimum, Kenney wants to see that cap removed, as it barely scratches the surface of the financial impact of low oil prices. What criteria should be used to determine how much is doled out can be discussed, said Christine Myatt, a spokeswoman for the premier.

Kenney added Sunday in Calgary the cap should be lifted retroactively "to recognize the pain we've been going through for five years."

On Friday, the Alberta leader said he thinks there is enough agreement among the premiers on many issues that they'll be able to come up with joint requests of the federal government even in a brief meeting.

He has previously talked about holding a vote in Alberta on the federal equalization program to demonstrate how badly it needs changing. Friday, Kenney called a more generous fiscal-stabilization program an "equalization rebate," implying that they're related and changing one would be similar to adjusting the other.

"I think there's an understanding with other provinces that Alberta's really going through a time of trial," he said.

Climate policy will be a tougher area to get all parties agreeing. Ontario, Saskatchewan, Alberta and Manitoba have all launched legal challenges against the federal carbon price, while others have accepted it, or launched their own programs to gain exemptions from the federal backstop.

Nunavut Premier Joe Savikataaq was in Ottawa this past week ahead of the meetings, and said he accepts the program.

"It's here and we know it's staying and it doesn't do any good to fight something that's already there and in place," he said.

"We just want to get more resources so we can do our share to mitigate the effects of climate change."

There are other points of tension in the group.

Manitoba Premier Brian Pallister has been outspoken against Quebec's Bill 21, which prohibits some public employees, including teachers, government lawyers and police officers, from wearing prominent symbols of their religious beliefs.

Pallister's government recently announced it is rolling out ads in Quebec that welcome government workers to move to Manitoba if they feel threatened by the ban.

Ontario Premier Doug Ford, who offered to host the meeting after the election, said he expects there to be fractious debate, but with a common goal.

"With any big family as we are, there's going to be a few disagreements," he said.

"But we want to send the message around the world that we're a united Canada, we're stronger together and we'll get over these bumps."

The meeting will be an opportunity for the premiers to focus prior to talking in the new year with Trudeau, New Brunswick Premier Blaine Higgs said Sunday.

"We may come with individual items, but at the end of the day we say, 'OK, what are the main items we're going to bring forward to the PM?'"

This report by The Canadian Press was first published Dec. 1, 2019.

—With files from Stephanie Taylor, Shawn Jeffords and Terry Pedwell.