Rural Alberta getting more police officers, but must pay for them directly 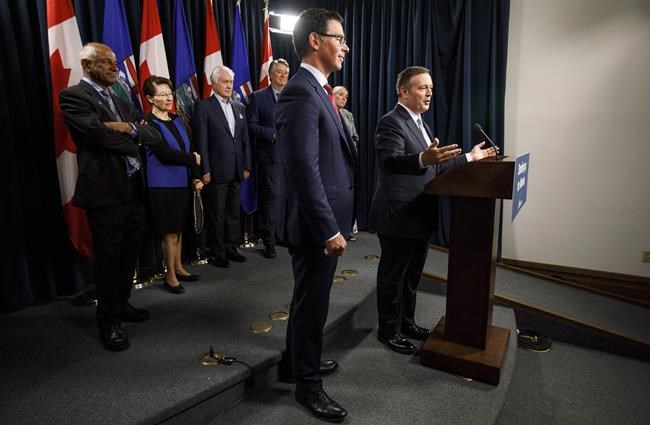 EDMONTON — Alberta's small municipalities and rural areas are getting more Mounties — but they're also getting the bill for it.

Premier Jason Kenney's United Conservative government says that starting next year, those areas will pay a portion of overall policing costs on a rising scale in order to raise an extra $200 million by 2024.

Justice Minister Doug Schweitzer said that money, along with a rising federal contribution, will mean an extra $286 million for those rural areas over five years.

It is to be used to hire 300 officers, plus others in specialized crime units such as drug trafficking.

"This is truly a partnership where we've listened to Albertans," Schweitzer told the house Wednesday, while the Opposition NDP shouted back that his plan was a "bait and switch."

"We've listened to the rural municipalities to find a new path forward that is sustainable," Schweitzer added.

He said the move will help fight rural crime and ensure local leaders have a say on a new police advisory board.

"Rural Albertans know they have a true voice now in government to make sure that their concerns are addressed to help keep them safe in their communities," said Schweitzer.

The NDP said hiring more police is a laudable goal.

But it said it was "duplicitous" for the UCP to promise more police resources for rural areas, force those residents to pay for the added service themselves — probably through higher property taxes — then trumpet the move in a news release as a "historic investment in rural policing."

"The municipalities are paying for it. There's not one extra red cent going to this policing announcement from the provincial government."

Small municipalities under 5,000 residents and other rural districts have previously had their policing costs entirely covered by the province at a cost of almost $233 million a year.

The 291 districts represent about 20 per cent of the Alberta population.

The municipalities, with some exceptions, will begin paying for 10 per cent of their total policing costs starting next year, rising to 15 per cent in 2021, 20 per cent in 2022 and 30 per cent the year after that.

Under its deal with the federal government, Alberta pays 70 per cent of policing costs and Ottawa pays 30 per cent. As the provincial contribution rises, so does the federal payout to maintain that ratio.

Al Kemmere, president of the Rural Municipalities of Alberta, said it appreciates having input on the new Alberta Police Advisory Board, but the cost is concerning.

"Rural crime has been an ongoing issue in Alberta in recent years, and rural municipalities recognize they need to share in the costs of the solutions to support safer communities," said Kemmere in a statement.

"Absorbing additional policing costs will be a significant challenge for rural municipalities given the current economic environment."

While in government, Notley's NDP brought in a $10-million rural crime strategy that included streamlining and hiring more police and prosecutors.

The 2018-19 Justice Department's annual report says that led to reduced car thefts and break and enters and a nine per cent drop in rural property crime.