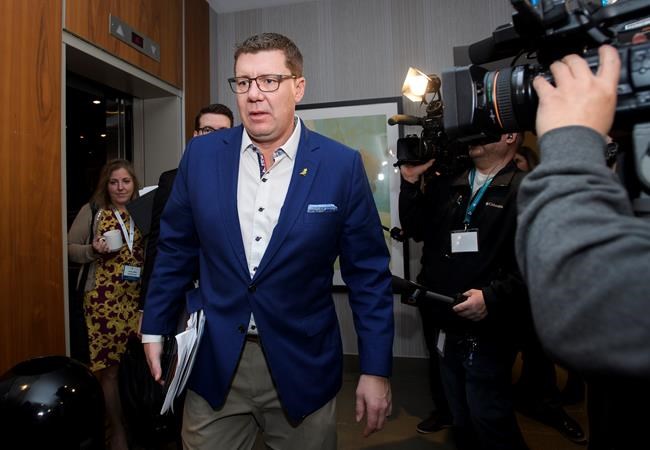 Moe says he wants additional control over selecting classes and skills to help achieve his goal of growing Saskatchewan's population by 300,000 residents to 1.4 million over the next decade and creating 100,000 new jobs.

The economic and family classes are the immigration areas Moe says he's most interested in.

He says he wants the province to have the ability to change the proportion of immigrants coming in under those categories as needed.

The province wants more say in immigration to be more responsive to Saskatchewan's job and population needs, he added.

"In many cases, like climate policy, the provinces are most connected with the needs of the industries that are operating in our communities across the province."

Saskatchewan is seeking immigration powers like the ones that exist in Quebec, said Moe, who added his minister of trade and immigration has put the request forward to the federal government.

Moe is also looking to Quebec as an example of how a province can collect its own taxes and said Saskatchewan is exploring a similar option.

"What would it take for resources if we chose to do this? What would be the advantages, disadvantages? These are fair discussions. I'm just being transparent with the discussions we're having."

The premier said he would be looking for ways to assert more provincial autonomy after he meeting with Prime Minister Justin Trudeau in Ottawa after Trudeau's October election win.

Opposition NDP Leader Ryan Meili said he's concerned about Moe using Quebec an as example for immigration because of that province's values test.

The test is to come into effect Jan. 1 and is to be administered to skilled workers, entrepreneurs and investors wanting to come to the province.

Moe, who called himself a "frustrated federalist" after Trudeau's re-election, has said he doesn't believe Saskatchewan separating from Canada is the answer to its frustrations. But he also said he won't condemn people feeling angry towards Ottawa.