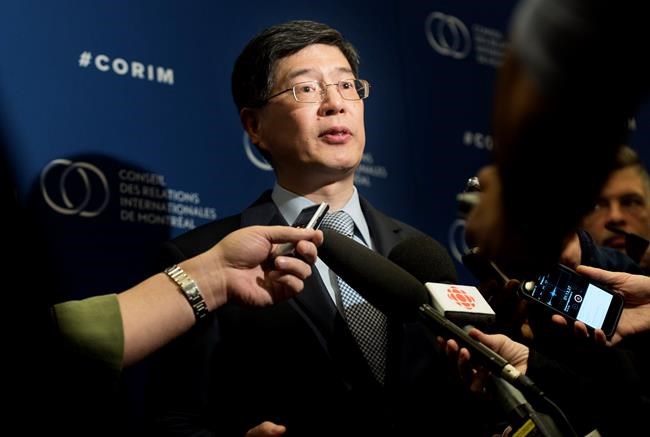 China has long warned against what it considers foreign meddling in its internal affairs, but Ambassador Cong Peiwu upped the tone Thursday in Montreal by saying there would be consequences if Parliament votes in favour of a motion set to be tabled in the Senate next week.

Conservative Senator Leo Housakos recently announced he and Senator Thanh Hai Ngo will table a motion calling on the Liberal government to sanction Chinese officials under the Justice for Victims of Corrupt Foreign Officials Act, also known as the Magnitsky Act.

The law, named after Sergei Magnitsky, a Moscow lawyer who was tortured and died in a Moscow prison after uncovering fraud in Russia, targets foreign nationals who are "responsible for gross violations of internationally recognized human rights."

Following a speech to the Montreal Council on Foreign Relations, Cong said if the Senate or House of Commons adopts the motion, "It suddenly would be a very serious violation of Chinese domestic affairs under such pretext of human rights or democracy."

He said "very firm countermeasures" would result. "It's not in the interest of Canada's side," he added. "We do hope they will stop this kind of dangerous activity."

In an emailed statement, Housakos said the ambassador's comments illustrate why his motion is needed. "The real danger is that the more we appease them, the more emboldened they become," he said. "It's time for Canada to stand up for our values. We are either defenders of democracy, human rights and the rule of law or we are not."

After his speech, Cong dismissed as "fake news" recent reports in international media that China is detaining hundreds of thousands of Muslims in the territory of Xinjiang, the Uighur homeland, in ideological and behavioural re-education centres.

The Chinese government is conducting "preventative counter-terrorism measures" that are providing security to the country, he said. "Since the past three years (there has been) no single violent terrorist incident," he said.

Classified documents leaked to a consortium of news organizations and published last month revealed a Chinese government strategy to lock up ethnic minorities before any crime has been committed to rewire their thoughts and the language they speak.

"They confirm that this is a form of cultural genocide," Adrian Zenz, a leading security expert on the far western region of Xinjiang, told The Associated Press. "It really shows that from the onset, the Chinese government had a plan."

Cong rejected the reports outright and said "the facts speak for themselves." More than 2.4 million tourists visited Xinjiang last year, he said. "And they enjoyed that very much."

The Uighur Human Rights Policy Act denounces the detention of an estimated 1 million Uighurs, Kazakhs and others in Xinjiang, home to the predominantly Muslim minority groups. It would require the State Department to evaluate whether Chinese officials would meet the criteria for sanctions for their roles in enacting oppressive policies.

Canada-China relations have been strained since Dec. 1, 2018, when RCMP arrested Huawei executive Meng Wanzhou at Vancouver's airport, at the request of the United States.

Days later, two Canadians — Michael Spavor and Michael Kovrig — were detained in China on allegations of undermining national security, and the two men continue to be held in that country.

"These two Canadians are arrested by competent Chinese authorities because they are suspected of endangering Chinese national security," Cong said. "Their legitimate rights have been guaranteed."

This report by The Canadian Press was first published on Dec. 5, 2019.