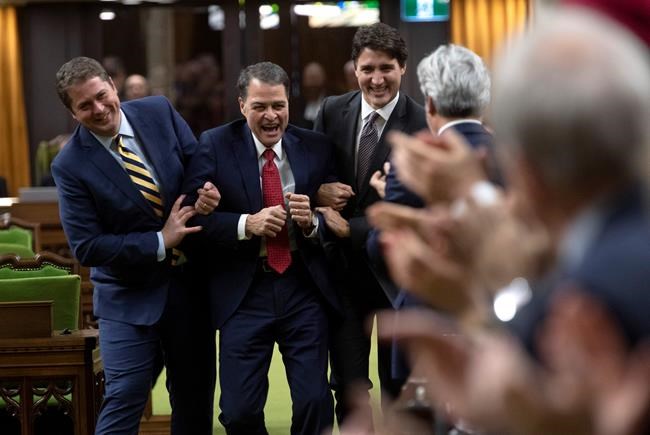 OTTAWA — Liberal MP Anthony Rota has been elected Speaker of the House of Commons, beating out fellow Liberal Geoff Regan, who was Speaker during the last session of Parliament and wanted to continue.

Rota, 58, represents the northern Ontario riding of Nipissing—Timiskaming and was a deputy speaker in the last Parliament.

His election to the top job this time is being billed by some as an early sign of how the official Opposition intends to throw its weight around now that the Liberals have been reduced to a minority.

The Conservatives, with 121 seats, didn't have the numbers to elect one of their own to the challenging post. But with the Speaker being elected via a preferential ballot, they could try to ensure Rota came out on top.

Under preferential balloting, MPs list their first, second and subsequent choices. The votes for the last-place candidate are redistributed to his or her supporters' second choices, a process that continues until one candidate emerges with more than 50 per cent of the vote.

To place Rota at the top of that list, all of the Conservatives — with support from MPs from other parties — simply had to rank Regan farther down.

The decision to try and unseat Regan as a show of strength was made at the Conservative caucus meeting earlier this week but MPs refused to discuss it publicly citing the confidentiality of caucus proceedings.

As in keeping with tradition, Rota was mock-dragged to his new post by Prime Minister Justin Trudeau and Opposition Leader Andrew Scheer, a ritual that signifies the harsh fate that can befall someone entrusted with keeping decorum in the House.

It's a challenge that could be that much harder in a minority Parliament, and Trudeau said MPs would be looking to Rota for guidance.

"I know that though that every member will strive to ensure constructive and therefore productive debates, there will be times where our differences will get the best of us and have us get carried away," Prime Minister Justin Trudeau said Thursday in the House.

"And we will then look to you, Mr. Speaker, Parliament's referee, to keep us in line."

Conservative Leader Andrew Scheer was Speaker from 2011 to 2015, when MPs used a different voting system that saw them vote repeatedly until a winner was elected. It took him six rounds to win. He noted the neutral black and white colours of the Speaker's uniform denote Rota's non-partisan role.

"You will represent the collective rights and responsibilities of members while you are in the chair, but you will also represent our Parliament in several ways around the world," he said. "And I have great confidence that you will do so with the dignity and professionalism that being the Speaker of a G7 country warrants."

Rota promised to be fair, non-partisan, and do his best — and he urged MPs to do the same.

"I ask one favour of all members, to just think, every time they get up, and to make sure that our friends, family, children, and parents are all proud of us when we are in this House," he said.

This report by The Canadian Press was first published Dec. 5, 2019.