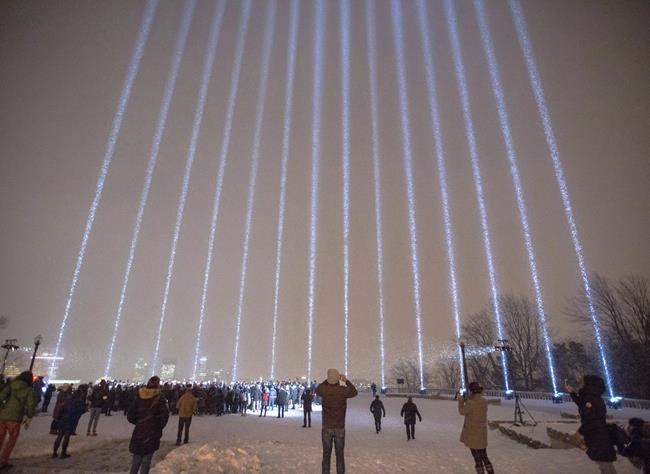 MONTREAL — There were promises to end violence against women and solemn reflection Friday as ceremonies were held to honour the 14 victims of the Dec. 6, 1989, anti-feminist attack at Montreal's Ecole polytechnique.

On the 30th anniversary of Canada's worst mass shooting, the House of Commons fell silent as members of Parliament remembered the victims who were targeted because they were women.

Conservative MP Marilyn Gladu fought back tears as she listed the names of the 14 murdered women. Gladu said that as the first female engineer elected to the House of Commons, she feels a special bond to the victims.

"These women were my sisters," she said. "I name them now to respect them for the strong women they are and they were."

Members of the public also paid their respects in front of the campus, and among the first was Jean-Pierre Bernard.

Bernard, went to high school in the Gaspe region with one of the victims, Sonia Pelletier.

"I came for the 25th anniversary, and every year I wear my (memorial) pin. It's very important for me," Bernard said.

Later, families of the victims and survivors gathered inside for the launch of a book written by Montreal journalist Josee Boileau.

The book, "Ce jour-la — Parce qu'elles etaient des femmes" ("That Day — Because They Were Women") is to be translated into English next year. It takes a broader look at the advancement of women in Quebec society.

The families and friends of the 14 women killed at Polytechnique were involved in the book, lending their voices to talk about the lives — determined and full of energy —  cut down too soon.

"When people will read this — particularly young women of today — they will recognize themselves. They'll say, 'There's very little difference between who I am and those women,' " said Serge St-Arneault, whose sister Annie was killed in the attack.

St-Arneault said he's happy that people are no longer mincing words when it comes to what happened at Polytechnique — declaring clearly that it was an attack against women.

"I'm very touched by what I've heard today, it gives me some peace," said St-Arneault, but his mind is not completely at ease. "We are still a society where too many women are being killed every year, especially by guns."

"Each December, as we honour the memories of those 14 women, the survivors and the families, we promise to do better," Trudeau said. "But the reality is that in 30 years, things haven't changed enough."

Trudeau highlighted the Liberal campaign pledge to ban semi-automatic assault rifles, including the weapon used in the Polytechnique killings, as evidence of his government's commitment to action.

"These weapons, designed to kill the largest number of people in the shortest amount of time, have no place in our communities, in our streets, in our country," he said.

Conservative Leader Andrew Scheer said women should not have to fear for their safety simply because of their gender. "It is unacceptable that violence against women remains an issue to this day," he said.

NDP Leader Jagmeet Singh warned that the "anti-woman hatred" that led to the massacre in Montreal remains a threat.

"Thirty years after Canadians said, 'Never again,' following the Polytechnique tragedy, we need to recognize collectively that we still have a long way to go to respect that commitment," Singh said.

Later Friday, as the clock struck 5:10 p.m. — the time the 1989 attack began — dignitaries, families of victims and the public gathered on Mount Royal for a memorial ceremony.

Fourteen beams of light were projected over the Montreal skyline as the names of the 14 women whose lives were taken were read aloud. Gov. Gen. Julie Payette told the several hundred people gathered that on Dec. 6, 1989, she too, was studying to be an engineer.

"I was in university, like (them)," she said. "By choice. I was there not to change statistics, not because of an ideology or activism — even though I am a feminist — but because I loved the profession and I wanted it to be my career. I am an engineer through and through."

Catherine Bergeron, whose sister Genevieve was one of the 14 victims, said "it has been 30 years and it's still important to remember. Tonight, I am reminded that in uniting the spirit of solidarity and tenderness, we all turned the tragedy into a triumph of the human spirit."

To mark the 30th anniversary, 14 engineering schools across the country shone a beam of light in honour of the victims as the Montreal ceremony got underway.

On Thursday, the City of Montreal changed the wording on a plaque at the Place du 6-decembre-1989 to declare that the attack was an anti-feminist act.

This report by The Canadian Press was first published Dec. 6, 2019.