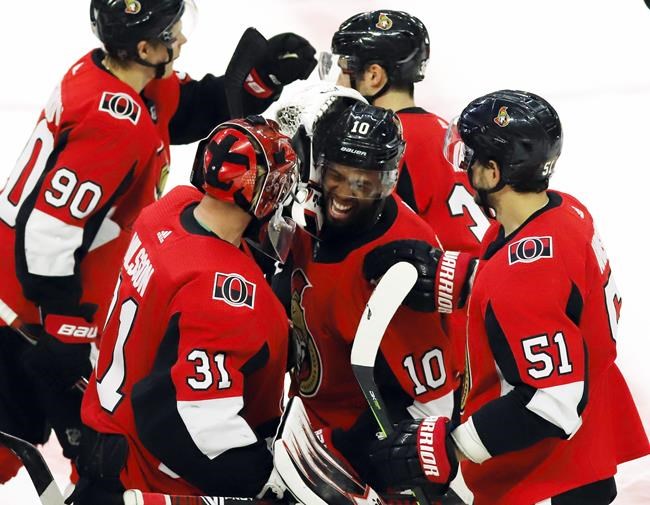 Duclair scored on the power play in overtime to complete the hat trick and give the Ottawa Senators a 4-3 win against the Columbus Blue Jackets on Saturday afternoon.

Duclair, who played in Columbus last season, now has eight goals in his past five games.

Duclair credits much of his success to being given opportunities that often weren’t available to him in the past.

“I’m getting the opportunity to prove myself every shift,” said Duclair. “Sometimes I don’t have a good shift or make a bad play or whatnot, but the big thing is I’m right back out there next shift and I can prove myself that it won’t happen again, compared to in the past sometimes if I make a mistake or whatnot I’m sometimes glued to the bench so just happy to continue to get opportunities.”

Last year Duclair fell out of favour with the Blue Jackets and was eventually traded to the Senators, but not before coach John Tortorella said: “I don’t think he can play.”

The 24-year-old seems to have found a home playing in Ottawa under coach D.J. Smith.

“What I’ve liked about him is that his work ethic has seriously improved,” said Smith. “He’s very responsive. He’s a good teammate, guys like him. He’s a team-first guy. It’s great when a guy like that has success and then other guys pull for him.”

Alexandre Texier had a pair of goals for the Blue Jackets (12-14-6), while Cam Atkinson also scored.

Elvis Merzlikins started the game, but was pulled after the first period, allowing two goals on eight shots. Joonas Korpisalo came on in relief and stopped 17-of-19 shots.

The Blue Jackets didn’t have the best first two periods, but found a way to fight back in the third only to fall short.

Nilsson made a couple of fantastic saves in overtime, one on Atkinson and another on Oliver Bjokstrand.

“He was good all night,” said Smith. “If it’s not for him we don’t win the game, it’s that simple. That’s part of it. Sometimes the goalie’s got to steal you one and I think he did.”

The Senators led 3-1 going into the third, but the Blue Jackets cut the lead to one four minutes into the period as Texier, from the slot, slid one between Nilsson's pads.

Texier tied the game with his second of the game midway through the period.

“They clogged things up pretty good in the neutral zone so if we can get it in behind them and get in on our forecheck I think that’s when we’re at our best,” said Eric Robinson. “I think the third period was a product of that.”

Nilsson believes the Senators can learn a lot from this game going forward.

“I think we played two really good periods, the first and second, and then I think we came out flat in the third and didn’t play our game,” Nilsson said. “You see how good this league is that as soon as you step down a few percentages the other team takes over… When we play at our level, the way we can, we’re a really good team, but as soon as you step down one or two per cent it’s hard to win at this level if you don’t play at a 100 per cent.”

Trailing 2-1 the Jackets opted to make a goalie change and put Korpisalo in.

Looking for the equalizer the Blue Jackets had a great opportunity, but Nilsson made a big save on a 2-on-1.

Moments later the Senators made it 3-1 when Brown broke in alone on Korpisalo to score his fifth of the season.

Duclair gave Ottawa a 2-1 after one period.

He opened the scoring in the early minutes, beating Merzlikins with a wrister.

Nilsson then appeared to make a spectacular save on Atkinson, but the Blue Jackets challenged and upon review the puck had crossed the goal line.

The Senators regained the lead as Artem Anisimov made a great pass to Duclair on a 2-on-1 and he buried it.

Nick Paul scored soon after, but once again Columbus challenged and the play was ruled offside.

Defenceman Mark Borowiecki found himself fighting Josh Anderson after Columbus took exception to a hit on Sonny Milano early in the first period that left the winger shaken and out of the game.

Notes: The Senators are without D Dylan DeMelo, who suffered a hand injury Thursday. Andreas Englund was recalled from AHL Belleville. Scott Harrington was a healthy scratch for Columbus.

This report by The Canadian Press was first published Dec. 14, 2019.