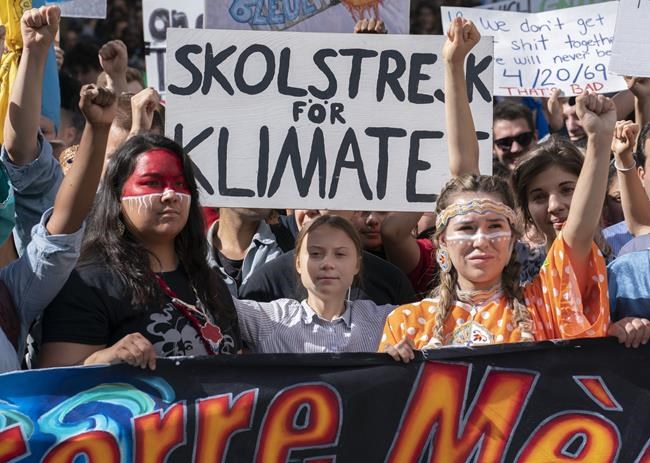 OTTAWA — In late September, hundreds of thousands of Canadians took to the streets across the country to demand more from their governments on climate change.

It was one of the largest mass protests in Canadian history, adding maple flavours to an international climate strike movement founded around Swedish teenager Greta Thunberg.

It was also a sign, many in the environment movement believed, of Canada's climate-change coming of age.

"2019 was like the year of climate awakening for Canada," says Catherine Abreu, the head of Climate Action Network Canada.

It was a year that saw warnings Canada is warming twice as fast as the rest of the world, the imposition of a national price on pollution, a vote in Parliament to declare a climate emergency and a federal election in which climate was one of the few real issues to make its way through the din of nasty politics.

Climate change was chosen in a survey of reporters and editors across the country as the 2019 Canadian Press News Story of the Year.

"I don't think it can be anything but climate change," said Toronto Star senior editor Julie Carl. "It is gripping our attention, our reality and our imagination."

A decade ago, climate change was more academic than reality, but in recent years few Canadians haven't been touched directly by the kind of weather climate change may be causing: floods, fires, major storms, cold snaps, heat waves, longer winters, shorter growing seasons. In June, when Parliament voted to declare that we are facing a climate crisis, it came as parts of eastern Ontario, Quebec and New Brunswick were bailing out from the second once-a-century flood in three years.

In the survey, climate change had stiff competition, barely beating out the SNC-Lavalin saga, which itself had to fight its way into second ahead of the Toronto Raptors' NBA title. In western Canada, many votes were cast for the hunt for two men who murdered a couple and another man in British Columbia before fleeing to the muskeg of northern Manitoba, where they would take their own lives.

But for many editors, the decision to rank climate change No. 1 comes both from the impact it had in 2019 and its expected dominance in our lives in the future.

"There's no bigger story than the human-made altering of our own planet — even if you don't believe it," said Paul Harvey, senior editor at the Calgary Herald and Calgary Sun.

Canada's new environment minister, Jonathan Wilkinson, ran for office in large part because he wanted to do something to address climate change, a problem, he said in a recent interview, that "is a defining issue of our time."

It is also a defining issue for the Liberal government. Prime Minister Justin Trudeau ran on a promise to ramp up Canada's environment policies in 2015, including setting a path to reduce greenhouse-gas emissions and fix Canada's environmental review process for major projects.

But the government's decision first to approve the Trans Mountain pipeline expansion, and then spend $4.5 billion to buy the existing pipeline when political opposition threatened to derail the project, left environment advocates disappointed and room for his political critics to pounce.

"You. Bought. A. Pipeline," NDP Leader Jagmeet Singh countered in a news release, when Trudeau unveiled his climate plans during the election campaign and promised to lead the way to a greener country.

Climate change is also at the heart of the anger driving talk of western alienation — and in the most extreme cases, separation — as oilpatch workers, and others who depend on the oilpatch for their jobs, fear for their futures.

It leaves any government in Canada with a true conundrum: how to reduce emissions drastically without tanking an economy where oil, gas, manufacturing, and transportation are key. Unlike some small European nations, Canadians live far apart, in cities built around the automobile, and in places where heating and electricity needs in the winter months are high.

The political fight between Ottawa and the provinces over how best to manage climate change is a big part of the story and Canadians seem to want them both to win. Two-thirds of Canadians voted for parties advocating for carbon taxes while an equal number voted for parties that promised to complete the Trans Mountain pipeline.

In 2019, Saskatchewan, Ontario and Alberta took Ottawa to court over the federal carbon tax. The first two already lost in their provincial courts of appeal and are appealing to the Supreme Court of Canada. Alberta's case is on this week.

Ottawa's new environmental-assessment process for major projects makes climate change one of the considerations. It is one of the most hated bills in Alberta and Saskatchewan, where governments believe it will mean no new pipelines ever get built in Canada. For environment leaders, that is not a bad thing. For the energy sector, it's a death knell.

Valerie Casselton, managing editor at the Vancouver Sun and Vancouver Province, said it "arguably" cost Scheer the election "in a year when the Liberals faced scandal after scandal but managed to rally by climbing onto their green platform planks."

This report by The Canadian Press was first published Dec. 17, 2019.