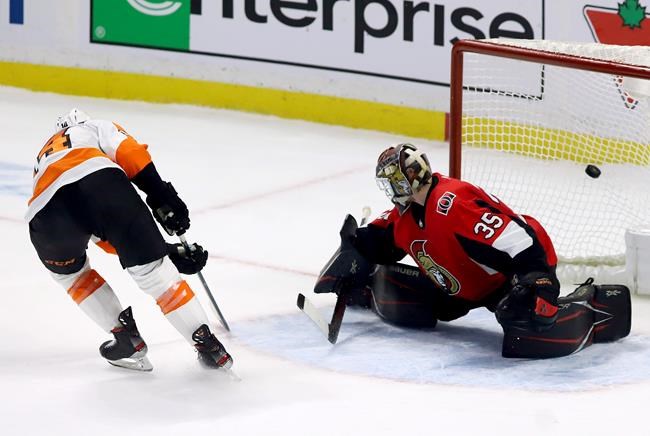 OTTAWA — Despite losing 5-4 to the Philadelphia Flyers in a shootout Saturday night, the Ottawa Senators did plenty to impress.

The Senators got some uplifting contributions from a number of players that left coach D.J. Smith feeling pretty good about his team’s overall game.

Marcus Hogberg, who stopped 34 shots, made his third straight start as Anders Nilsson missed his second game with a concussion and Craig Anderson was not yet ready to return from a knee injury, but he did serve as the backup.

The 25-year-old was most impressive in overtime making a number of saves to keep the game going and made a big stop in the final minutes of regulation with the Senators (15-18-4) shorthanded.

“He was great,” said Smith. “He’s been very good coming up from Belleville. He gave us every chance to win in Calgary, he was outstanding in Tampa, the game he won was probably an average game, and then he gave us every opportunity to win in the third period, made a save when it counts…I think the kid has been outstanding.”

Tyler Ennis scored twice and now has ten goals on the season, while Anthony Duclair extended his hot streak and Mark Borowiecki set a career high in goals with his fourth of the season.

“It was an entertaining game, a lot of chances from both sides, some great saves and a lot of goals,” said Flyers coach Alain Vigneault. “In the three on three [overtime] we had plenty of opportunities to put them away, we didn’t, their goaltender was outstanding and we found a way to get one done in the shootout.

The Flyers had a great opportunity to seal the win late in the third period after the Senators took their second bench minor of the night for too many men, but they were unable to capitalize.

Ottawa leads the league with nine bench minors for too many men.

“That’s got to stop,” said Ennis. “Those kinds of mental errors can’t happen. We’ll fix that and a couple other things and move forward.”

Tied 3-3 to start the third, the Flyers went ahead as van Riemsdyk scored his second of the night beating Hogberg through the legs.

Van Riemsdyk was happy to contribute, but felt that overall the Flyers could have played a much better game.

“We just didn’t execute at a good enough level early on,” said van Riemsdyk. “I think we weren’t as dialed in as we should have been, but we were able to find a way to get the two points which is all that counts, but definitely not one of our better games.”

Midway through the period, Ennis scored his second of the night as he buried a Duclair rebound to knot things up 4-4.

Ennis is buoyed by his contributions seeing as he’s on pace for a 20-goal season, something the 30-year-old hasn’t accomplished since the 2014-15 season.

“I’m just trying to improve every day and work hard and try and find that younger Enzo that I had going a few years ago,” Ennis said. “I ran into some injury trouble, obviously, and now D.J. (Smith) has given me a great opportunity.”

Philadelphia had seized an early 2-0 lead in the second when van Riemsdyk’s cross ice pass deflected off Cody Goloubef’s skate and in.

The Senators then went on to score twice in a span of 24 seconds to tie the game.

Ennis scored Ottawa’s first goal as he was able to pick up a loose puck by the crease and push it in. Borowiecki then tied it with a shot from the point for his fourth of the season, setting a new career-high.

“He shoots the puck, he doesn’t play around,” said Smith of Borowiecki’s play. “he doesn’t get it and make a bunch of moves, he just puts everything on net and when you shoot pucks, pucks sometimes go in. He doesn’t give you an inch, he plays hard. He gave us a great game (Saturday).”

At 18:21 of the second period, Ottawa took its first lead of the night as Duclair scored a power play goal. He now has 11 goals and four assists in his past 11 games. This latest marker was Duclair's 21st of the campaign, which establishes a new single-season career high for the 24-year-old — besting his previous mark of 20 goals set during the 2015-16 season.

The 3-2 Ottawa lead was short lived as the Flyers tied the game back up less than a minute later when Voracek was able to beat a sprawled Hogberg.

Philadelphia grabbed an early 1-0 lead in the first period as Hayes was able to sneak the puck past Hogberg’s right pad.

Notes: The Senators were without three of their veteran defencemen as Ron Hainsey, Dylan DeMelo and Nikita Zaitsev are all injured... Philadelphia forward Joel Farabee served the last of his three-game suspension for his hit on Winnipeg’s Mathieu Perreault.

This report by The Canadian Press was first published Dec. 21, 2019.