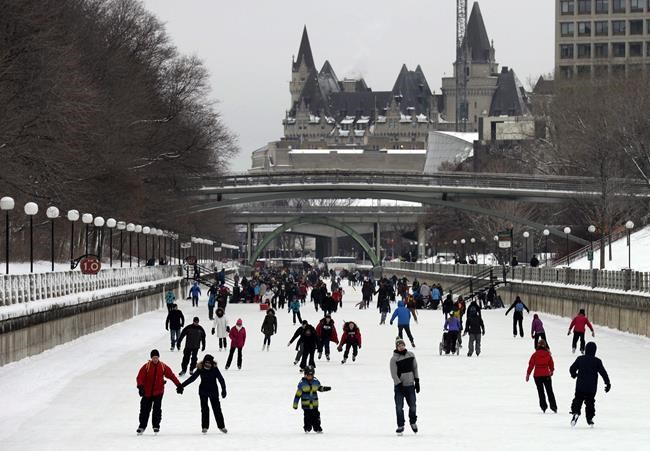 OTTAWA — A soon-to-be-retired senator has taken his decades-long fight to protect important heritage buildings to "the heart of the nation," where his final act before leaving the Red Chamber for good is aimed at protecting the area around Parliament Hill.

The impetus for Sen. Serge Joyal's initiative — a private member's bill seeking to extend the federal government's power to limit changes to land and buildings around the so-called Parliamentary Precinct — is a proposed addition to Ottawa's iconic Chateau Laurier, across the Rideau Canal from Parliament.

The proposed addition is meant to contrast with the hotel's French-castle style, which was itself an anachronism when it was built in the early 20th century. The addition's many critics have variously described it as resembling a giant air conditioner, shipping container or radiator tacked onto the side of the regal Chateau.

That the privately owned building not only sits next to Parliament Hill and the Rideau Canal, but is considered by many to be a part of the Parliamentary Precinct that includes many other federal buildings along Wellington Street, made the proposal even more contentious.

Yet despite the public outcry, Ottawa city council in July upheld an earlier decision to allow the addition (though it's since gotten hung up on a zoning technicality).

Around that time, Joyal started looking into what powers the federal government had over the proposal — and discovered it had virtually none.

"Parliament Hill doesn't enjoy any particular statutory status and anyone can build anything (around it) that finds its way through the municipal council of Ottawa," he says. "In other words, Ottawa (council) is the only authority in the immediate protection area to have a say on that."

The hotel's owner, Vancouver-based Larco Investments, through its representative Momentum Planning and Communication, did not respond to requests for comment.

Joyal, who will retire from the Senate when he turns 75 on Feb. 1, has been fighting to save heritage sites since 1966. One of his first battles involved an ultimately unsuccessful effort to save the Van Horne mansion in Montreal's historic Golden Square Mile.

Built in 1869, the Victorian mansion was purchased 20 years later by Sir William Cornelius Van Horne, president of the Canadian Pacific Railway. In 1973, with mayor Jean Drapeau's approval, it was bulldozed in the middle of the night to avoid protests and replaced by a high-rise.

"We fought the city and the Quebec government until there was better regulations and better legislation adopted," Joyal says of what followed. "And now at least we have the statutory instruments to oppose changes that we think challenge the integrity of historical sites."

Joyal has continued to lend his voice to fight against the destruction and development of historic sites in Quebec and other parts of the country, including successful efforts to save the Maison Alcan in Montreal and the neighbourhood around Gatineau's Museum of History.

"I thought that the Chateau Laurier expansion would have been submitted to close scrutiny under regulations and legislation of federal origin," he tells The Canadian Press in an interview from France.

"And I realized there was nothing, there was no real legislation and that in fact the National Capital Commission was helpless in terms of having a statutory base to exercise scrutiny and oversight over any expansion projects around Parliament Hill."

This lack of federal power around any federal historic and heritage sites was actually flagged by the House of Commons' heritage committee in December 2017. In fact, the committee said Canada was the only G7 country that did not have legislation to that effect.

Joyal says he expected the Liberals to include such legislation in their election platform, but that didn't happen. As a result, he took the ball himself and introduced his private member's bill earlier this month as his last act before retiring from the Senate.

The bill will continue to be championed by Sen. Patricia Bovey when the Red Chamber resumes sittings on Feb. 4. The Manitoba senator is an art historian and former gallery director in Victoria and Winnipeg.

Like many other critics of the proposed addition, Joyal says he is not opposed to expanding the Chateau Laurier — only the current design, which he describes as a "horror" that threatens to desecrate Parliament Hill's surroundings.

"This is the heart of the nation," he says. "It's not just a site like any other one where you could build anything you want. You are in the heart of a nation. ... That's why I thought it was time to address the essential weakness of our system."

Joyal's bill has been lauded by opponents of the proposed Chateau Laurier addition, including Coun. Mathieu Fleury, whose ward includes the hotel and who disagrees with those who say government should not be allowed to limit what a private company can do with its property.

Fleury believes that unlike the National Capital Commission, which manages federal properties in Ottawa, city council is poorly placed to make decisions on matters of national importance thanks to its competing interests, its four-year election cycle and the limited scope of its powers.

"Frankly at council we're not equipped to deal with that. ... That's why the National Capital Commission was created in the first place: To have a longer-term, regional capital-city view."

The question for Richard Belliveau, president of the citizens' group Heritage Ottawa, who also supports Joyal's initiative, is even if the federal government does give itself the power to limit development near Parliament Hill, will it use it?

"They're not going to get into a battle that they think is just transient," Belliveau says. "This is a way of saying the federal government must take an interest in this. But you still have to exert your authority once you get it."

This report by The Canadian Press was first published Dec. 25, 2019.