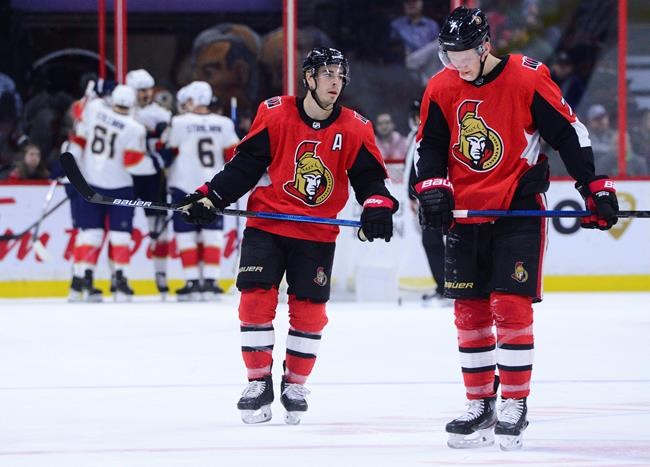 OTTAWA — The Senators have prided themselves on outworking their opponents all season and Thursday night's 6-3 loss to the Florida Panthers was a reminder of what happens when Ottawa doesn't give its full effort.

Florida pulled away with four goals in the second period with Frank Vatrano's proving to be the winner.

"We've had some good periods this year, but that second might have been the best one we've had all year," said Panthers coach Joel Quenneville. "We had good awareness, good playmaking, good patience with the puck, good speed. I thought we checked well and obviously scoring certainly helps, but I think overall that might have been doing everything you're looking to do in a period."

Evgenii Dadonov scored his second power-play goal of the night to tie the game 2-2 for Florida (21-14-5) and 89 seconds later Noel Acciari gave the Panthers the lead.

Vatrano and Colton Sceviour scored 44 seconds apart in the final minute of the period to put the game out of reach. Jonathan Huberdeau added an empty-net goal in the third to round out the scoring for Florida.

"At home to put in an effort like that is unacceptable and we know that as a group we have to outwork teams and we didn't do that."

The win allowed Sergei Bobrovsky, who made 28 saves, to pick up his first road win since Oct. 30.

The Senators were at a loss for words to describe their second period performance.

"I thought we came out really hard and had one of our best periods this year and the second was totally the opposite," said forward Jean-Gabriel Pageau. "They came out and we didn't win battles, we stopped shooting pucks and they were first on every puck.

"When you don't have the puck it's hard to score goals and they're obviously a good team so they're going to score some goals and play keep away with the puck. Definitely not the second period we wanted."

Tyler Ennis and Chris Tierney gave Ottawa (16-20-5) a 2-1 lead heading into the first intermission and Connor Brown scored in the third.

Smith felt for his goaltender who put in a valiant effort, but had little chance.

"We hung (Anderson) out there," Smith said. "They're shooting in the back of the net from ten or 15 feet out, teeing those up and that's not fair to him. Certainly, this isn't on him (Thursday)."

This was the second meeting between the two teams, with the Panthers taking the first 6-1 on Dec. 16.

After Dadonov, who had two goals and an assist, opened scoring 1:41 into the game, Ennis tied the game as his backhand shot deflected off Riley Stillman's stick and over Bobrovsky. The Senators took the lead as Tierney took a pass from Anthony Duclair and wristed it far side.

Dadonov set the tone again at the 8:54 mark of the second period, opening the floodgates for the Panthers.

"I don't think we did much different (in the second)," said Dadonov. "Maybe we fixed a few little details, but just kept playing our game and got to the dirty areas."

Ottawa played a better third period, and was able to get a goal from Brown late in the period, but the game was well out of reach by that point.

Notes: Ottawa acquired defenceman Mike Reilly from the Montreal Canadiens in exchange for forward Andrew Sturtz and the Senators' fifth-round selection in the 2021 NHL Draft Thursday night. Rudolfs Balcers made his season debut for the Senators after being recalled from AHL Belleville where he has eight goals and 16 assists in 19 games.

This report by The Canadian Press was first published Jan. 2, 2020.