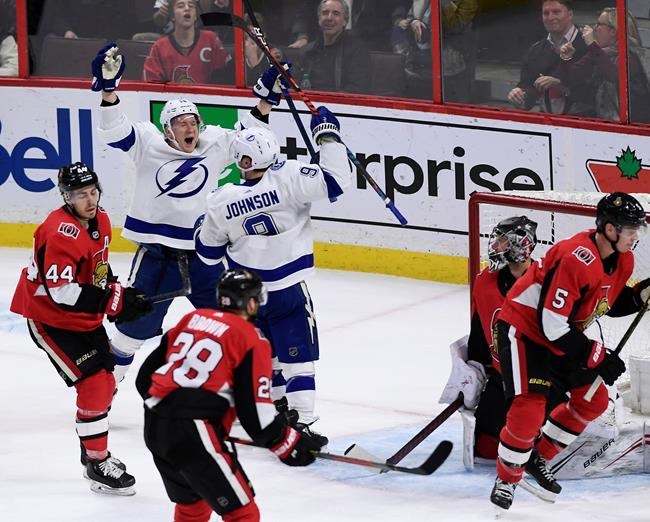 OTTAWA — Despite having lost four in a row, the Ottawa Senators still feel pretty good about their game.

“I thought we played really well,” said Ottawa coach D.J. Smith. “I thought we probably out-chanced them (Saturday). I thought we skated the best we’ve skated in a couple weeks. We were on pucks, we had some chances and they just found a way to win.”

The Lightning, winners of their last six games, have been playing some of their best hockey of late and proved to be too much for the Senators in the third period.

Tyler Johnson scored the winner with 1:30 left in regulation after Brayden Point tied the game 3-3 right before the midway point of the third. Alex Killorn added an empty-net goal with seven seconds remaining.

“We knew we hadn’t played our best game yet,” said Lightning defenceman Kevin Shattenkirk. “Obviously going down by a goal we knew if we got back to our principles, we would get our chances. We were patient with it."

The final minute of play had fans on their feet as many believed the Senators had tied the game, but the goal was called off because Colin White deliberately head-butted the puck past Curtis McElhinney, who made 25 saves.

“In the moment I didn’t know the rule so just thought I would try that instead,” said White. “Rule’s a rule so I can’t complain, but I tried it and obviously it didn’t work out for a goal, but I’ll know for the future.”

The Lightning also got second-period goals from Carter Verhaeghe and Shattenkirk.

The Lightning dominated play in the third and had a number of chances outshooting the Senators 14-7. Point showed some patience to handcuff Mark Borowiecki and wristed a shot past Anderson to tie the game 3-3 at the eight-minute mark of the third period.

“A team like that has so much fire power up front and the back end too and they start coming in waves in the third and pushing it’s tough,” said Borowiecki. “They’ve just got so many weapons that you just have to try and weather the storm and do your best to not give them chances off the rush. It’s kind of where they thrive. They’ve got guys who can make plays and make things happen and unfortunately we weren’t tight enough in the third and they made us pay.”

Tierney missed a great chance in the final minute of play in the first period, but made up for it by scoring shorthanded in the first minute of the second to open the scoring. On an odd-man rush, Tierney's shot went off Victor Hedman’s skate and fooled McElhinney.

The Lightning went on to take the lead in the second by scoring twice in a span of 65 seconds. First, Hedman found Verhaeghe in the slot who buried the puck into an empty cage. Then, just over a minute later, a trailing Shattenkirk picked up a loose puck and fired it past Anderson.

Pageau matched his career-high with his 19th of the campaign on a one-timer that beat McElhinney blocker side to tie the game 2-2. It was also his first power-play goal of the season.

Borowiecki gave the Senators the lead scoring with nine seconds remaining in the second as he fired a slapshot glove side.

“We were pretty lethargic the first two periods and it was a little deflating to get that goal scored with eight seconds left,” admitted Lightning coach Jon Cooper. “We weren’t really getting momentum from anything, not even our power play, so we needed to regroup. We’re walking in there pissed off they scored, but it was probably the best thing for us.”

The 30-year-old Borowiecki is having a career year and has been a solid presence on the Senators blueline.

“There’s a little bit of extra emotion in there when it’s a contract year for you,” Borowiecki said. “I’ve been around for a while so you’re going to get a little fired up.”

Borowiecki is set to become an unrestricted free agent and the Senators will need to make a decision regarding his future as the trade deadline approaches.

Defenceman Mike Reilly, acquired from Montreal on Thursday, made his debut for the Senators.

The Lightning lost the services of Ryan McDonagh with an undisclosed injury after the first period. Cooper said McDonagh is doubtful for Sunday’s game against Carolina.

Notes: Ottawa’s Anthony Duclair is day-to-day after blocking a shot in Thursday’s game against Florida... Scott Sabourin was a healthy scratch as Mikkel Boedker entered the lineup for the first time since Nov. 25.

This report by The Canadian Press was first published Jan. 4, 2020.