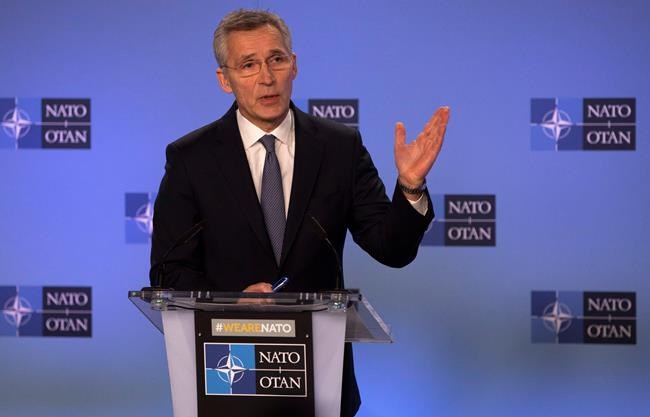 Hundreds of Canadian soldiers were hunkered down on military bases in Iraq on Monday, their missions suspended due to security concerns, as the U.S. and NATO offered contradictory messages about the future involvement of western forces in the war-torn country.

The Canadians were on high alert against any attack following the killing of an Iranian general by the U.S. over the weekend, which had prompted threats of retaliation from Tehran and calls from Iraq's parliament and outgoing prime minister for the withdrawal of foreign troops.

The commander of the Quds Force of Iran's Islamic Revolutionary Guards Corps and widely considered the second-most powerful leader in Iran after Ayatollah Ali Khamenei, Iranian Maj.-Gen. Qassem Soleimani was killed by a U.S. drone near the Baghdad airport Friday night.

Following a meeting in Brussels Monday with representatives from all 29 members of the military alliance, NATO Secretary General Jens Stoltenberg indicated a Canadian-led training mission in Iraq would resume once the security situation there improved.

"We have suspended our training mission now because of the security situation on the ground, but we are ready to restart the training when the situation makes that possible," Stoltenberg told reporters during a news conference at NATO headquarters.

The NATO chief went on to defend the training mission, which includes 250 Canadian soldiers and is being commanded by a Canadian general, as essential for defeating the Islamic State of Iraq and the Levant even as he called on Iran to exercise restraint.

Only hours later, however, reports began to emerge that the commander of the U.S.-led coalition against ISIL had written a letter to Iraq's defence ministry indicating he was preparing to pull out his troops in response to Baghdad's wishes.

"We respect your sovereign decision to order our departure," he wrote.

A copy of the letter was obtained by Reuters, AFP and the Washington Post, all of whom reported confirming its authenticity.

Yet U.S. Defense Secretary Mark Esper insisted to reporters at the Pentagon that there had been no decision to leave Iraq. The U.S. military's top general, Mark Milley, similarly insisted the letter was a poorly worded draft that had been sent by mistake.

Earlier in the day, the Canadian government had indicated it was preparing to take a wait-and-see approach to the situation in Iraq, with Foreign Affairs Minister Francois-Philippe Champagne reaching out to his Iraqi counterpart to reiterate Canada's commitment to fighting ISIL.

"Minister Champagne pledged to continue to work with the government of Iraq to achieve the peace, stability and prosperity that the people of Iraq want and deserve," Champagne's office said in a statement. "Both ministers have agreed to keep in close touch in the coming days and weeks."

Defence Minister Harjit Sajjan similarly asserted on Twitter following conversations with Stoltenberg and British Secretary of State for Defence Ben Wallace that the government was "committed to a stable Iraq, the fight against (ISIL) and to resume training when the situation allows.

"During the temporary pause, our focus is on the safety of those who serve."

The Prime Minister's Office said Justin Trudeau spoke to Stoltenberg to discuss the situation in Iraq.

"They emphasized the importance of de-escalating tensions and the need to support security and stability in Iraq and the wider region, notably through ongoing counter-Daesh efforts," it said in a readout from the conversation, adding that Stoltenberg noted NATO is prepared to continue training when "the situation permits."

The confusion around Seely's letter underscored the degree to which the future of Canada's mission in Iraq is beholden to decisions in Washington and Baghdad — and how quickly such decisions can come. A U.S. withdrawal would likely lead to a similar pullout by Canada.

Alex Ruff, a retired colonel who served with the NATO training mission in Iraq before retiring from the military last year and being elected a Conservative MP, said military planners in Ottawa will be working through all possible scenarios to prepare for whatever comes.

"I'm sure all the planners, they're earning their money right now because they are going through the planning cycles necessary to react accordingly once NATO or U.S. or Canadian leadership or any of the nations make their respective decisions," he said.

And while Ruff expressed confidence that the Canadian troops in Iraq are taking sufficient measures to protect themselves, he said that when it comes to the future of the mission: "It's going to be a decision made by NATO and, ultimately, the Iraqis. ... It's their country."

Canada has commanded the NATO training mission since it was created in 2018, with Maj.-Gen. Jennie Carignan having recently taken the helm. The mission was established to train the Iraqi military in the basics of soldiering so they can defend against any ISIL resurgence.

The NATO mission is separate from that of dozens of Canadian special-forces soldiers who have been working with local security forces in northern Iraq's Kurdistan region since October 2014. Canada also has medical personnel and a helicopter unit in the north.

Their activities have also been similarly suspended while the Canadian government waits to see how the situation unfolds. The government has not said what contingency plans it has to withdraw quickly.

Canada first deployed troops to fight ISIL, or Daesh, in 2014 when the extremist group overran large parts of Syria and Iraq. The mission has evolved several times since then as the focus has shifted from beating back ISIL to ensuring it does not have the ability to reconstitute itself.

The Canadian military also has troops in Kuwait, Lebanon and Jordan as part of the anti-ISIL mission.

Yet popular unrest in Iraq over endemic corruption, a lack of government services and Iran's influence in the country, the mounting tensions between the U.S. and Iran, and the ongoing war in Syria have pulled attention away from the fight against ISIL.

This report by The Canadian Press was first published Jan. 6, 2020.