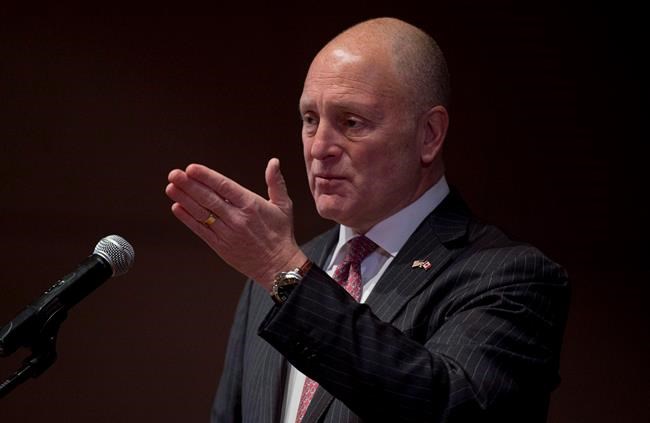 OTTAWA — President Donald Trump's decision to order the killing of a top Iranian general has elevated his disregard of Canada and other American allies to a new level, says Barack Obama's former envoy to Ottawa.

Former ambassador Bruce Heyman says the killing of Iranian Maj.-Gen. Qassem Soleimani by a U.S. drone near Baghdad's airport last week is part of a pattern of disruptive international decisions that have left Washington's allies "in really tough spots."

Past examples include the U.S. withdrawal from the Paris climate-change agreement, the Trans-Pacific Partnership trade deal and the Iran nuclear deal, which included the five permanent members of the United Nations Security Council and Germany, he said.

Those decisions caused serious headaches for American allies, including Canada, while last Friday's killing has imperilled the NATO training mission in Iraq that Canada currently leads, said Heyman. Iraq is ordering all international troops out of the country because it views the American attack on its soil as a violation of Iraqi sovereignty.

"I think this is at a different level," Heyman said in an interview.

"What concerns me, at least as publicly reported, is that the U.S. did not consult with our allies prior to this action. And if that is the case, it put Canada and others in a fairly difficult and complex situation on the ground."

Heyman, a Democrat, has been a fierce critic of Trump, and has emerged as a vocal booster of Canada-U.S. relations during the Republican president's rocky term in office. He was also the American diplomat who helped broker Canada's entry into Iraq in 2014 as a U.S. ally in its fight against the spread of the Islamic State of Iraq and the Levant in that country and neighbouring Syria.

Robert Malley, the president of the International Crisis Group, said Trump's decision to order the drone strike was in part motivated by his desire to project a stance on Iran that was "anti-Obama at all costs," while projecting that the U.S. is not fearful of any consequences.

"They are sending the message: don't mess with us; we are not afraid of anything you can do to us," said Malley, who previously served on Obama's National Security Council.

The Associated Press has reported that Obama and his Republican predecessor George W. Bush decided against ordering a targeted killing of Soleimani because it could spark severe repercussions.

Malley said two key considerations would have been at the top of any president's checklist before ordering such a drastic decision — taking measures to protect U.S. forces from retaliatory attacks and the "management" of allies.

The Canadian Forces announced Tuesday that it was temporarily moving an unspecified number soldiers from Iraq to Kuwait due to security concerns.

Now American allies, including Canada, have a role to play in filling the diplomatic void opened by Trump, Heyman said.

"I'm hopeful that the U.S. allies are talking amongst each other and trying to figure out how best they can calm the waters," said Heyman.

Their conversations emphasized the need to find ways to dial down tensions in the region.

Terse summaries of the calls from the Prime Minister's Office emphasized the need for cooler heads — dubbed "de-escalation" — and commitment to continue fighting ISIL.

Safadi said on Twitter that he had an "in-depth discussion" with Champagne that "emphasized all must work to de-escalate rising tensions. Stressed #Iraq stability is key to regional security & central to defeating #Daesh. Int'l coalition must remain intact. Great ties."

This report by The Canadian Press was first published Jan. 7, 2020.