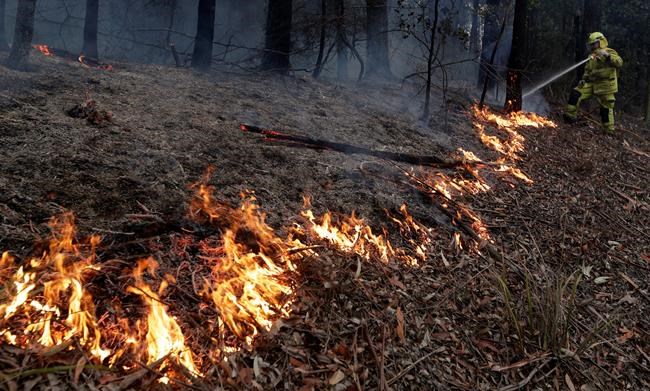 More than 12.5 million acres (about 5.1 million hectares) of bushland have burned in Australia since October and prime forest-fire season is just now getting underway.

Multiple heat waves and a lengthy and widespread drought left much of the country, including some of its most populated regions, at higher risk for fire than ever before.

To date the fires have killed 25 people and an estimated 500 million animals, and destroyed almost 1,900 homes. More than 100,000 people have been forced to evacuate to escape the flames.

"What's happening in Australia now is extraordinary," said Ed Struzik, a fellow at the Institute for Energy and Environmental Policy at Queen's University.

And he says, Canada is not immune to seeing the same thing.

"We're as vulnerable as any country in the world," he said.

Canada is home to about 30 per cent of the world's total forests, and 10 per cent of what is known as forest cover, which refers to a specific density of trees.

According to the National Forestry Database, Canada's worst year for forest fires burned about seven million hectares in 1995, while the average yearly amount burned is about 2.3 million hectares.

Struzik says fire risk is going up in Canada because of climate change, human activity and a glut of fuel for fires in forests ravaged by pests like the mountain pine beetle.

"We're seeing things that we just haven't really seen before," he said. "So the signals are there. Very strong signals that we're going to see things get a lot worse before they get better."

University of Alberta wildland fire professor Mike Flannigan says "climate change's fingerprints are all over these Australian fires" and play the same role in raising the risk in Canada.

He said for every degree of warming, the number of lightning strikes goes up by about 12 per cent. Lightning usually causes more than half of the wildfires in Canada.

He also said warmer temperatures dry out trees and other fuels for the fire. Unless there is an associated increase in rainfall, there is more fuel available to burn, allowing fires to start easily and spread more rapidly. They are also more intense fires, making them harder, or even impossible, to extinguish.

Canada, like Australia and California among others, is also seeing an increase in the number of fires burning closer to where people live and in places where they didn't usually burn before. That is partly because communities are growing out into areas that used to be very unpopulated, but also because people are playing and enjoying the natural environments in places they did not visit much in earlier times.

Humans cause between one-third and one-half of the fires in Canada each year, said Struzik.

Both Struzik and Flannigan say Canada needs to invest in more research to work on fire prediction, prevention and monitoring in particular. Struzik said some of the tools being used now were developed 70 years ago.

Flannigan said fire research budgets have been cut to the bone over the last 20 years or so, but he said he thinks recent investments are now turning that ship around.

Better emergency-management plans and systems at the community level are also desperately needed, say Struzik and Flannigan. The 2019 federal budget set aside $151 million over five years to improve emergency management and some of that money is going to research, said Flannigan.

Individuals who live in cities far from canopied forests are more likely to be affected by smoke and should invest in air purifiers, said Flannigan. Those who live near bigger forests should reduce the risk by removing fuel like shrubbery and mulch around their homes, and not use wood shingles. They also need an evacuation plan.

Remote communities that have limited ways in or out should have fire-safe shelters built, they say.

This report by The Canadian Press was first published Jan. 7, 2020.

Note to readers: This is a corrected story. A previous version said about 12.5 million hectares of land in Australia have burned.