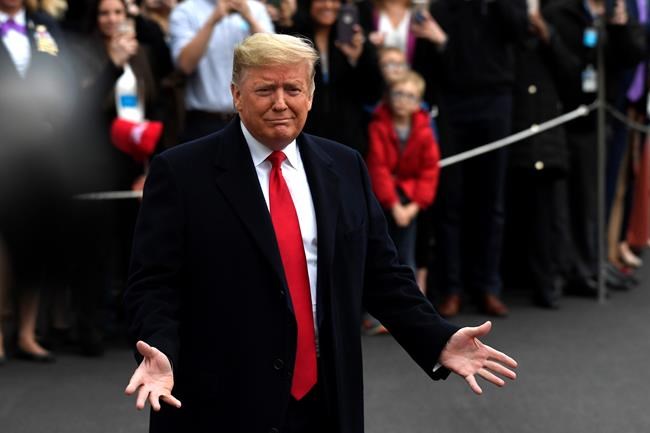 The manipulated photo retweeted by Trump showed House Speaker Nancy Pelosi and Senate Minority Leader Chuck Schumer in Muslim garb with the caption: “The corrupted Dems trying their best to come to the Ayatollah’s rescue #NancyPelosiFakeNews.” Trump, a Republican, had previously faulted Democrats for criticizing his administration’s targeted killing of Iranian Gen. Qassem Soleimani, but his use of Muslim imagery as part of that effort drew pushback from Muslim American advocates.

“The image is a hodgepodge of anti-Muslim tropes and garb from many traditions including some that are frequently used to stereotype and attack Muslims,” Madihha Ahussain, special counsel at the group Muslim Advocates, said in a statement. “It’s disappointing but not surprising that the president would use his massive Twitter platform to spread this kind of harmful, ignorant, anti-Muslim bigotry.”

Wa’el Alzayat, CEO of the Muslim American group Emgage Action — named for its mission to engage Muslim Americans — also criticized Trump’s decision to amplify the doctored photo of Pelosi and Schumer. “There’s no place for it, irrespective of political differences,” he said in an interview.

Schumer tweeted his own pushback to Trump, asking: “How low can you go?”

The image that Trump retweeted has been circulating on the internet for a few days. The Twitter account that Trump got it from has a history of tweeting in both English and Persian about Iranian issues, promoting pro-Trump content and criticizing U.S. Democrats.

White House press secretary Stephanie Grisham defended Trump’s retweet of the image, telling Fox News on Monday that the tweet was intended to show Democrats “have been parroting Iranian talking points, and almost taking the side of terrorists and those who were out to kill the Americans.”

Democrats have raised questions about the Trump administration’s rationale for ordering the Soleimani killing, warning about the resulting heightened tensions with Iran. But no Democrats have praised Soleimani, and Pelosi herself described him last week as a “terrible person” who “did bad things."