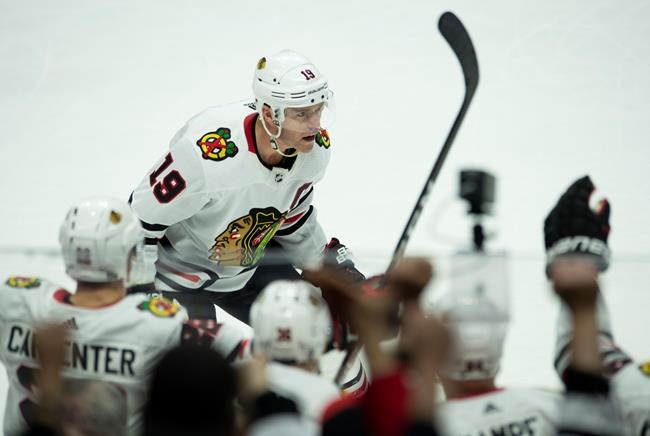 OTTAWA — The one thing DJ Smith prides himself on is the Ottawa Senators work ethic, but Tuesday night the head coach was far from impressed.

After coughing up a 2-0 first period lead Smith felt his team got outworked, which didn't sit well with him.

"Ultimately I felt we had too many passengers (Tuesday)."

A pair of goals by Dominik Kubalik, who now has seven in his last five games, tied the game 2-2 early in the third after the Blackhawks (21-20-6) trailed 2-0 early.

"We kind of fell asleep off the faceoff and they got a rush goal off a tough change," said Chicago head coach Jeremy Colliton. "The last 50 minutes or so we stuck with it. We were patient and the second period we really used it to get back in the game. It was a big two points for us."

Robin Lehner was solid, stopping 20 shots, as Chicago played the first of a three-game road trip in Eastern Canada.

Hogberg has been the Senators best player of late, stopping 75-of-83 shots and helping the Senators get to overtime and a shootout through his three appearances. Despite that, he's still looking for his second win of the season. Six of Hogberg's last seven starts have gone to overtime.

"He's putting in a lot of great efforts and kept us in a lot of games and made some timely saves," said Dylan DeMelo. "He's been excellent. It would be nice to get one for him here."

Ottawa has just one regulation win in its last 14 games (3-5-6). The Senators are now winless in their past eight games (0-4-4), a season-high losing streak.

The Senators have shown flashes of solid play, but are struggling to find any consistency.

"That's why you see St. Louis, you see Boston, you see Washington and they do it over and over every night and they don't let up," DeMelo said. "We're trying to get there and that's obviously where we need to get to for our group and we'll get there in time."

Ottawa wasted no time getting things started as Brown scored 3:33 into the game, banging home a DeMelo rebound.

Tierney gave the home team a 2-0 lead less than four minutes later, scoring his seventh of the season as he tipped a pass from Thomas Chabot.

With time running out in the second Kubalik cut the Senators 2-0 lead in half as he deflected a Patrick Kane shot and beat Hogberg.

Kubalik then beat Ron Hainsey in a foot race 3:41 into the third and scored on Hogberg five-hole for his 18th of the season.

Lehner made an impressive two-pad stack save on Anthony Duclair to keep the game close early in the second, which seemed to spark the Blackhawks as they began to push back.

Lehner, who spent part of five seasons in Ottawa, admitted he was a little shocked by the crowd of 12,238 on hand at Canadian Tire Centre.

"When I played here it was packed buildings all the time and a great atmosphere," Lehner said. "It was just kind of sad to see what it is right now."

Toews had a wide-open net, but shot wide, leaving the captain shaking his head.

Tuesday's game marked the return of Zack Smith, who was traded to Chicago for Artem Anisimov in the off-season. Smith's 612 career games with Ottawa is ninth all time in franchise history. Smith has two goals and nine points through 39 games, while Anisimov has eight goals and ten points in 27 games with the Senators.

Notes: Nikita Zaitsev was back in Ottawa's lineup for the first time since suffering an undisclosed injury Dec. 14. The Senators announced Nick Paul would likely miss a month due to a high ankle sprain.

This report by The Canadian Press was first published Jan. 14, 2020.