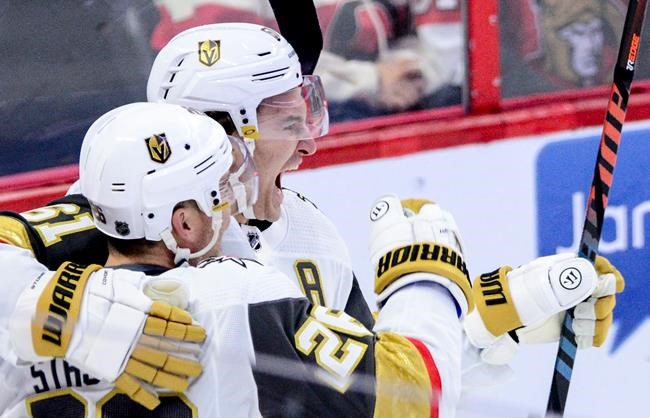 OTTAWA — Mark Stone wasn’t sure what to expect in his return to Ottawa, but he made sure it was memorable.

Stone scored a goal and picked up an assist in the Vegas Golden Knights' 4-2 win over the Ottawa Senators Thursday night.

Stone was playing his first game in Ottawa since being traded to Vegas last February.

“It was nice to get the win,” said Stone. “It was weird for sure. Six great years over there. They took a chance on me from day one. I was no shoe-in to be an NHL hockey player and this team helped me develop and mold me into the player I am today. It was unfortunate that we weren’t able to end my career here, but at the same time Vegas has become home and the place that I want to spend the rest of my career.”

The win snapped a four-game losing streak for the Knights (25-19-6), who were playing their first game under head coach Peter DeBoer after Gerard Gallant was fired Wednesday morning.

DeBoer didn’t have a lot of time to settle in as he met with the team briefly Thursday morning and then prepared for the game.

“I told them if I call any of them Jumbo or Burnsie to kick me,” joked DeBoer. “I didn’t make any mistakes on names, but it was a good night. It’s a good group and like I said a tough week and some hard days. I thought it was nice to get a win and kind of move past that.”

DeBoer is looking forward to having some time together with the team both on and off the ice as he realizes there will be some adjustments.

Wednesday, players took responsibility for Gallant’s firing and know it’s on them to turn things around.

“Nothing’s really going to change,” said Stone. “We know we need to be better. We know we have a good team. There’s obviously going to be little tweaks that (DeBoer) is going to want us to do, but for us we need to get back to playing with that character we know we have.”

Marc-Andre Fleury stopped 33 shots, while counterpart Craig Anderson made 39 saves in his first game since Jan. 7.

With the victory, Fleury tied Henrik Lundqvist for fifth place on the NHL all-time list with 458 career wins.

“It’s not ideal when you’re dealing with young kids and confidence,” said Senators coach D.J. Smith. “As long as we keep getting better, I think the biggest thing is we got healthy on the backend and I think we’ll turn the corner there.”

Ottawa hosts the Calgary Flames Saturday night before an eight-day break and would hate to leave with a ten-game losing streak on their mind.

“When you’re a young team and you’re learning how to win (it’s tough),” said Connor Brown, who had a goal and an assist. “A lot of these games could have been won easily, especially the three prior to this one where we lost in OT and I thought we played pretty good games. It comes with maturity and learning so we’re learning how to play and how to play with a lead and play from behind. Obviously it’s important for us not to get discouraged and try to stay as positive as possible in a situation like this and focus on the process.”

Vegas led 1-0 before Stone scored late in the second period on a wraparound effort.

The Knights made it 3-0 early in the third as Chandler Stephenson scored shorthanded after Thomas Chabot had an ugly giveaway.

Ottawa got on the board one minute later when Chris Tierney found Vladislav Namestnikov down low for the one-timer.

Vegas made it 4-1 after Anderson was caught behind the net and couldn’t get back in time to stop Ryan Reaves from picking up his sixth of the season, but the Senators managed to cut the lead in half as Connor Brown scored on the powerplay.

Vegas opened the scoring just 34 seconds into the game when Paul Stastny and Stone had a little give-and-go with Stastny beating Anderson for his 13th of the season.

Stone was given a video tribute during the first television timeout with fans giving him a standing ovation after which Stone took to the ice to thank the fans and gave them a thumbs up.

“Those were the good times,” said Stone. “I was fortunate enough to be part of two great runs here. One regular season run and one awesome playoff run. Met a ton of good people and still communicate with a lot of those people.”

Jean-Gabriel Pageau was a late scratch due to an upper-body injury, but is hopeful for Saturday.

Notes: Connor Brown played his 300th career game. Scott Sabourin returned to the Senators lineup after being a healthy scratch the last five games. Vegas will be without William Karlsson who is out week-to-week with an upper-body injury.