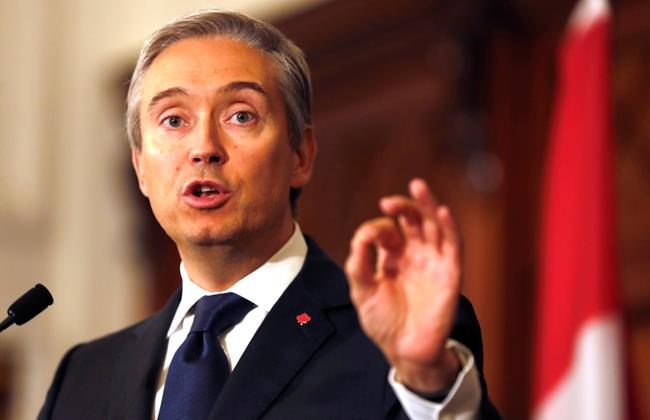 OTTAWA — Families of the Canadian victims on the Ukrainian passenger jet shot down over Iran last week will receive $25,000 each to help with immediate costs they have for travel or funerals, Prime Minister Justin Trudeau said Friday.

Trudeau said the victims' families face difficulties in paying bills now and cannot wait for a legal or international compensation process to play out.

In the interim, Trudeau said, the government and families agreed that $25,000 per victim would be a helpful "first step" to cover funeral arrangements and travel.

Trudeau said 20 families have asked to bring the remains of loved ones back to Canada for burial, though none had been transported by Friday.

"Obviously this is immediate assistance for a range of needs that they might have," Trudeau said during a late-morning press conference.

"It is not the compensation that we expect will come, and should come, from Iran in due course, but these families need help now."

The federal government could pay out about $2.15 million for the 57 Canadian citizens and 29 permanent residents who died when the plane crashed after an anti-aircraft strike Iran says was made in error as the plane left Tehran's international airport. Trudeau said the money would be paid out as quickly as possible in the coming days.

He was less clear about what amount he expects Iran to pay out.

"We haven't looked at what the full compensation would end up looking like from Iran," Trudeau said, "but I can assure you that any money from Iran to the victims would go straight to them, it wouldn't be to reimburse the Canadian government."

After a similar tragedy three decades ago, the U.S. government paid US$61.8 million to the families of the 290 victims aboard Iran Air flight 655. A U.S. naval ship shot it down on July 3, 1988. The American government said the crew of the ship misidentified that plane as possibly hostile fighter jet and didn't accept liability as part of a settlement with Iran in the International Court of Justice.

Likewise, Libya didn't admit responsibility for the bombing of a French passenger jet in 1989 when it agreed in 2004 to pay US$170 million to the victims' families. Like Iran now, Libya faced crippling economic sanctions in the lead-up to the payment.

Rod Winsor is a Toronto-based lawyer who worked on the Air India disaster, in which 329 people were killed when a terrorist bomb brought down a jet flying from Montreal to London in 1985. He said precedents suggest getting compensation from Iran could be a long and winding road with uncertain results. In the meantime, families could sue Ukraine International Airlines and potentially get settlements in months to years from the moment a claim is filed; an international process is driven by governments and would likely take a bit longer.

Interim payments to the families like the one Trudeau announced could also come from Ukraine International Airlines or even Iran, he said.

"In terms of the government's payment, they're absolutely right: The families are not going to get their final settlements for some time," Winsor said.

Foreign Affairs Minister Francois-Philippe Champagne delivered the request for compensation during a face-to-face meeting with his Iranian counterpart, Javad Zarif, in Oman on Friday. The demand was one of five that foreign ministers from Britain, Sweden, Afghanistan and Ukraine agreed on during a meeting Thursday in London, U.K.

An Iranian summary of the conversation posted online said Zarif reiterated his country's regret over shooting down the airliner and promised co-operation in a probe of how it happened.

A global team of investigators, led by Iran under international rules, is trying to determine the sequence of events that led to one — and possibly a second — surface-to-air missile taking down the passenger jet. Canada is seeking a formalized role in the probe to allow its investigators greater access, including to the voice and flight-data recorders, known as the "black boxes."

Champagne told Zarif about the need for "a transparent analysis of the black-box data."

The recorders were badly damaged in the incident and are likely to be sent to France for analysis, Trudeau said. Few countries have the capability to do the work.

Iran initially denied it fired on the airplane. It was only after Trudeau went public citing intelligence to the contrary that Iran admitted the Islamic Revolutionary Guard Corps fired on the civilian airliner, with the government pinning the blame on the military not being forthcoming with information.

Days of protesters flooding the streets in anger prompted Iran's supreme leader, Ayatollah Ali Khamenei, to make a rare sermon during Friday prayers in Tehran — it had been years since the last time. He called the downing a bitter accident that saddened Iran and made its enemies happy by giving international rivals a chance to question the country and its armed forces.

He also attacked the United States for its killing of a top Iranian general, which was a factor in putting Iranian air defences on high alert the day the Ukraine airliner was shot down.

The Canadian Press has independently confirmed at least 90 victims with ties to Canada, many of them students and professors returning after spending the December break visiting relatives in Iran.

This report by The Canadian Press was first published Jan. 17, 2020.