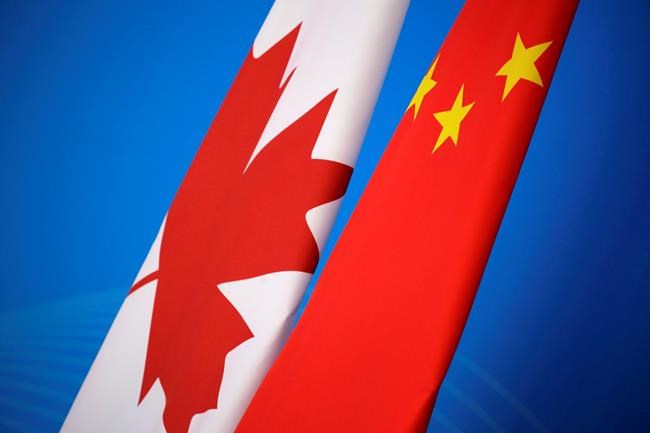 OTTAWA — Canada's ambassador to China, Dominic Barton, will be among the first witnesses to testify before a new special parliamentary committee created to examine Canada's fraught relationship with China.

The committee held its first meeting Monday, largely a planning session, and MPs from all parties agreed it was essential to hear from Barton, despite some minor differences of opinion on the timing. Eventually, they agreed he would testify before Feb. 7. Conservatives are pushing for an earlier appearance because Barton will be in Houston next Tuesday.

Barton was a high-powered business consultant who was named in September to Canada's top diplomatic post in Beijing to help repair Canada's shredded diplomatic and economic relations with China.

Opposition parties have flexed their collective muscles to push for answers from the new Liberal minority government as the Chinese imprisonment of two Canadians by the People's Republic enters its second year.

The committee is the result of a Conservative motion passed in December that was supported by opposition parties in the minority Parliament.

Conservative deputy leader Leona Alleslev said Barton told her in an email that he is "ready and willing" to testify.

She said it was important that he testify first because he could help the committee understand the government's strategy towards China.

"It's such a critical witness," she told the committee.

Alleslev said Barton could help the committee understand "what the lay of the land is from Canada's man on the ground, as they say."

Liberal MP Rob Oliphant, the parliamentary secretary to the minister of foreign affairs, said government MPs on the committee realize the importance of Barton testifying, but he initially suggested that a briefing from officials at Global Affairs Canada would better set the table for MPs.

"We will operate in good faith," he told reporters before the meeting. "We have Canadian lives at stake, and we're going to take that very seriously."

Thirteen months ago, China detained two Canadian citizens, Michael Spavor and Michael Kovrig, who remain imprisoned without access to lawyers or their families.

The move has been widely seen as retaliation for Canada's arrest of Huawei executive Meng Wanzhou at the behest of the United States, which wants to extradite her on fraud charges related to U.S. sanctions against Iran.

The motion that created the committee authorized it to order Barton, as well as Prime Minister Justin Trudeau, Foreign Affairs Minister Francois-Philippe Champagne and Public Safety Minister Bill Blair to appear as witnesses "from time to time as the committee sees fit."

Conservative foreign affairs critic Erin O'Toole said in December the committee will work to address Canada's current diplomatic dispute with China and help develop a specialized approach to easing the bilateral challenges between the two nations.

The all-party Canada-China relations committee convened Monday afternoon to deal mainly with a series of procedural issues, and the subject of Barton's testimony took up a good portion of the discussion.

The meeting coincided with start of Meng's extradition hearing in Vancouver.

"The U.S. and Canada abused their bilateral extradition treaty and arbitrarily took compulsory measures against a Chinese citizen without cause," said spokesman Geng Shuang, according to translated remarks on his ministry's website.

"This is entirely a serious political incident that grossly violates the legitimate rights and interests of the Chinese citizen."

Meng is free on bail and living in one of her two multimillion-dollar homes in Vancouver.

Deputy Prime Minister Chrystia Freeland said Monday that the well-being and release of Kovrig and Spavor is a "clear priority" for the Liberal government.

"That is at the heart of all the work we are doing and rightly so," she said in Winnipeg, where she was attending the Liberal cabinet retreat.

"Our government has been clear that we are a rule of law country and that we honour our extradition treaty commitments," she said.

This report by The Canadian Press was first published Jan. 20, 2020.