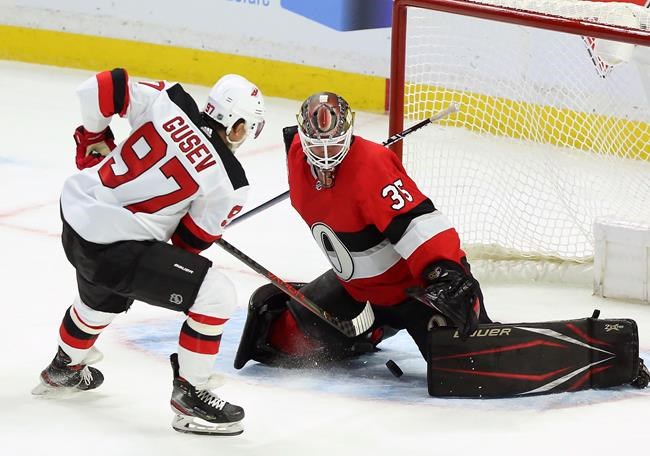 OTTAWA — Jack Hughes bailed out the New Jersey Devils after his team nearly collapsed in the third period against the Ottawa Senators.

Hughes scored the shootout winner as the Devils snapped a three-game losing streak with a 4-3 win over the Senators Monday night.

“It was exciting to help the team win,” said Hughes.

"That's a good comeback win for us. And not just take one point but take both.... It was important for us to come back and get that win"

The Senators trailed 2-1 heading into the third before scoring two short-handed goals in a span of 35 seconds to take the lead, only for Kyle Palmieri to tie the game with less than four minutes to go in regulation.

Jesper Bratt was able to grab a loose puck in the crease and get it to Palmieri, who quickly put it past Marcus Hogberg to make it 3-3.

“When we took the lead we had a lot of momentum, especially with two short-handed goals,” said Tierney. “It’s tough to give up one late there, but you’ve got to find a way to get the extra point sometimes.”

Hogberg added: “I can do better on the third goal. I wish I could have held on to the puck on the third one, but we battled hard out there and I like how we played.”

The Devils (18-24-7) had the better chances in overtime but Hogberg — who made 50 saves through regulation and the extra period — was solid.

Ottawa’s rookie goaltender has been outstanding of late, but has just two wins to his credit.

“It’s tough because it seems so many time’s he stands on his head and we can’t get him that extra point,” said Tierney. “It sucks. It feels like he’s giving us a chance to win every night and we’re just not picking up a couple extra points. Hopefully he can keep playing that way and we can find ways to win.”

Mackenzie Blackwood, making his first start since Jan. 9, stopped 35 shots for the Devils.

“I thought in general it was a really good effort,” said Devils interim head coach Alain Nasreddine. “Obviously not exactly how we drew it up at the end, but we’ve talked about resiliency now for a while. At 3-2 it wasn’t a good way to go down, but the guys found a way and tied it up and found a way to get two points in the end. It was a great effort.”

Mark Borowiecki had a scary moment in the third when Blake Coleman’s stick caught him right below the eye. The Senators defenceman immediately left the ice, but was back shortly after.

A game between the 28th- and 29th-place teams didn't lack intensity as Brady Tkachuk and P.K. Subban went at it. The two got under each other’s skin early in the first period and finally dropped the gloves early in the second. The two continued to rile one another in the penalty box.

The Devils took a 2-1 lead as Kevin Rooney scored a wraparound goal on Hogberg at the four-minute mark of the second.

New Jersey opened the scoring midway through the first period with a power-play goal that Hogberg misplayed. Damon Severson’s point shot rang off the post and hit Hogberg’s skate and he inadvertently pushed it across the goal line.

Ottawa tied the game late in the period as Tkachuk redirected a point shot to Tyler Ennis, who beat Blackwood with a quick shot.

Notes: The two teams were playing their first game in nine days following the bye week... Jean-Gabriel Pageau returned to Ottawa’s lineup after having missed the last two games before the break with a sore neck. Connor Carrick was a healthy scratch for the Devils. The Senators held a moment of silence in honour of Kobe Bryant and eight others killed in a helicopter crash Sunday morning.

This report by The Canadian Press was first published Jan. 27, 2020.