‘One of the big names of Senate history,’ Quebec’s Joyal leaves Red Chamber 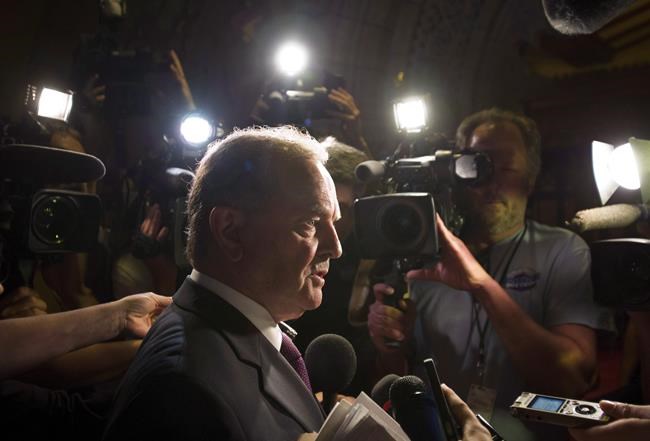 OTTAWA — In 2014, Justin Trudeau booted senators out of the Liberal caucus as part of his bid to transform Canada's Senate into a more independent, less partisan chamber of sober second thought.

Yet one of those turfed Liberals, Serge Joyal, has arguably demonstrated more independence throughout his 23 years in the upper house than any of the non-partisan senators Trudeau has appointed since becoming prime minister in 2015.

Joyal retires from the Senate on Saturday, his 75th birthday.

As a rookie MP from Montreal in 1976, Joyal sued his own government (led by Justin Trudeau's father, Pierre) over its directive that English be the only language used by air-traffic controllers.

At that time, he "got the message that if I would withdraw from the legal proceedings, my avenue to the cabinet would be quick," Joyal recounts in an interview. He refused and won the case. It would be another six years before he made it into the cabinet.

Joyal was defeated in 1984, when Brian Mulroney's Progressive Conservatives won power. Thirteen years later, Jean Chretien appointed him to the Senate, where he continued to practice his unique brand of independence, both in the chamber and in the courts.

A lawyer and constitutional expert, he has argued before the Supreme Court of Canada. And he's challenged the government of the day directly in court on more than one occasion.

Just last fall, he launched a lawsuit seeking to force the federal government to adopt an official French-language version of Canada's constitutional documents.

In 2013, Joyal intervened in the Supreme Court reference on Senate reform, arguing against Conservative prime minister Stephen Harper's bid to turn the upper house into an elected chamber with term limits.

However, he later sided with the Harper government against a challenge of a bill giving Canada's consent to changes in the law of succession to the monarchy.

The two Quebec professors who initiated the challenge are now seeking leave to appeal to the Supreme Court so, even in the midst of packing up his Senate office last week, Joyal was preparing his counter-argument for the court.

"I'm a peculiar kind of animal," Joyal acknowledges of his dual political and legal activities.

"I choose to do that ... I'm not paid by the Senate to do that or by pressure groups or a lobby group of some sort. I do it because I believe the issue at stake is an important one."

Despite his independent streak, Joyal always considered himself a loyal Liberal. And so, when Trudeau kicked him out of the Liberal caucus, he admits, "I was hurt."

He had spent 20 years as the policy chair for the Quebec wing of the party. He'd helped draft Chretien's famous "Red Book," the winning Liberal election platform in 1993. He'd helped Liberal leaders prepare for election debates. He'd represented the party on the No committee during the 1995 referendum on Quebec independence.

"I was very intimately involved in the life of the party," Joyal says. "That I was unceremoniously kicked out with not even a letter of thanks, I'm a human being ... Just a mere 'thank you,' I would have appreciated it."

Reflecting on the transformation of the Senate into a chamber where senators unaffiliated with parties now command the majority, Joyal regrets the loss of partisan groups that have an institutionalized responsibility, and the resources to back it up, to argue for and against government legislation.

Without partisan appointees, including former cabinet ministers, MPs and party stalwarts, he says, it's now left to individual senators to challenge the government and try to improve legislation. Trudeau's appointees typically have impressive resumes but most have little or no experience in public policy or Parliament.

"The Senate needs to have, in my view, a number of senators who come with that (political) perspective and that experience," Harder says.

But even if Joyal won't be physically sitting in the Senate anymore, his presence will still be felt on Parliament Hill.

An avid collector of art and historical artifacts, he has donated many of his finds to furnish the Francophonie Room and the Indigenous Peoples Room, two Senate meeting areas in Centre Block, which is now closed for massive renovations.

Back in when Joyal was an MP, Harder recalls walking into his office and thinking "I'd walked into a museum."

His Senate office suite was furnished by Joyal at his own expense, from ornate chandeliers hanging from the ceilings to artwork on the walls to sculptures on pedestals dotting the rooms. Joyal said he figured if he was going to spend 23 years in that office, he wanted to be "psychologically comfortable" in it.

He is donating everything in his office to the National Capital Commission for use in official residences.

This report by The Canadian Press was first published Jan. 31, 2020.