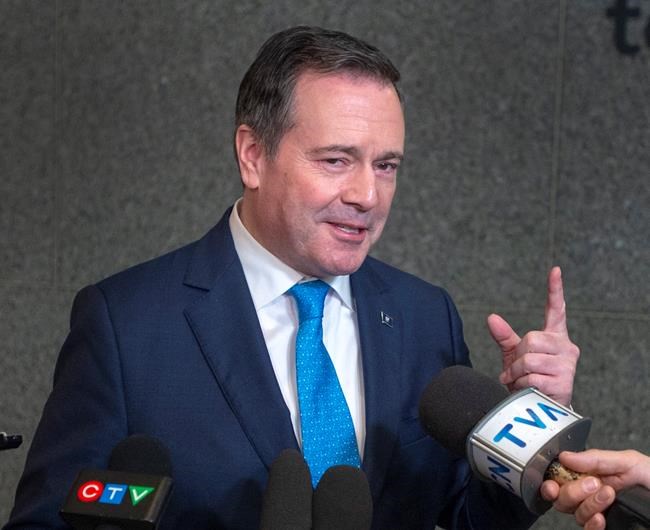 Kenney acknowledged he has locked horns with Justin Trudeau on many energy issues, but said the prime minister had been as good as his word on the Trans Mountain project.

"I have my disagreements with Prime Minister Trudeau on a number of issues ... but I think they did realize there has to be at least one project that gets Canadian energy to global markets so we can get a fair price," Kenney said in Montreal, where he has been pitching his province as a reliable energy provider.

"I think this government understands there has to be a balance, and we agree — a balance between economic growth and environmental responsibility."

The Federal Court of Appeal's three judges unanimously ruled to dismiss four challenges by First Nations in British Columbia that had been filed after Ottawa approved the pipeline expansion for a second time.

They had argued that the government's second set of consultations with Indigenous people had already predetermined the outcome.

"I want to underscore that the decision today said 129 First Nations groups were consulted and at least 120 were in favour or not opposed. That's the number we should keep our eye fixed on," said Kenney.

"I know that most of the coverage is focused on two or three groups who remain opposed. We also need to listen to the 120 who are in favour or not opposed. That's what the court did today."

The expansion project would triple the amount of bitumen shipped from northern Alberta to the west coast and from there to overseas markets.

The province has pushed for the project as an answer to higher unemployment rates and multibillion-dollar budget deficits due to depressed oil prices.

NDP Opposition Leader Rachel Notley, who was premier when the project was first approved, hailed the court decision as good for Canadians.

She suggested the project owes its survival in part to her government's working with the Liberals, which eventually led to the  federal government buying the project to keep it going when operator Kinder Morgan Canada pulled the plug in 2018.

Notley said her government brought a majority of Canadians on side with the project as a fair balance between the economy and the environment.

She suggested Trans Mountain is alive not because of Kenney and his adversarial approach to Ottawa, but in spite of him.

"This is something we can say that the current premier really has not had a lot to do with," Notley said in Edmonton.

"And I'm not entirely convinced that we would have gotten the federal government to do what they did (to keep the project alive) had we been in a different political situation 2 1/2 years ago."

This report by The Canadian Press was first published Feb. 4, 2020