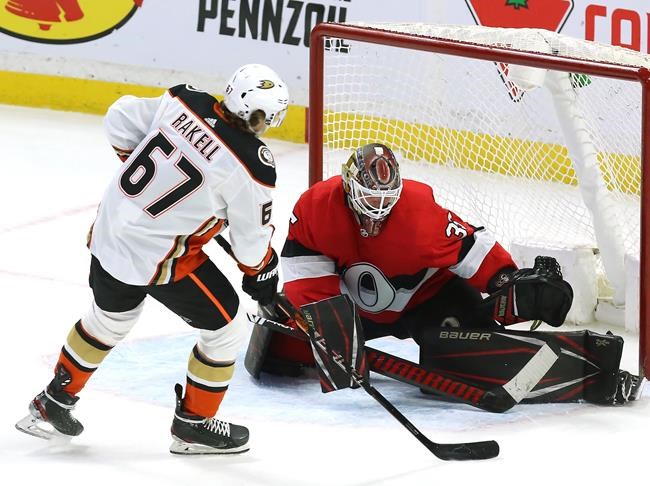 OTTAWA — As far as Jean-Gabriel Pageau is concerned, it was a toss up between his Ottawa Senators and the Anaheim Ducks on Tuesday night.

Rickard Rakell scored the shootout winner as Anaheim beat Ottawa 3-2, as the Ducks earned their second win to kick off a five-game road trip. Pageau thinks the loss could have easily been a Senators win, however.

"It's pond hockey a little bit when it's three-on-three and could go either way," said Pageau of the overtime period. "We had our chances, they had their chances and it goes into a shootout and that's not hockey, but that's what it is right now so not much we can do."

Nick Ritchie and Ondrej Kase had goals in regulation time for Anaheim (22-26-5), which has won four of its last five. John Gibson made 30 saves as the Ducks improved to 2-0-0 on their five-game road trip that started with a 3-1 win in Los Angeles against the Kings.

Anaheim head coach Dallas Eakins thought felt his team played slow and turned the puck over far too many times and will need to control the pace better if they hope to continue to find success on this road trip.

"We were very lucky," said Eakins. "I'm not sure we got what we deserved. That was not a very good game by us, but John Gibson held us in and we got some timely scoring."

Drake Batherson and Artem Anisimov replied for Ottawa with two power-play goals (18-24-11). With 10 home games this month the Senators hope to improve their record at Canadian Tire Centre where they're 1-4-5 in their last 10.

Marcus Hogberg stopped 26 shots in net. Eight of the rookie goaltender's last 11 starts have gone to overtime. He has just one win in overtime in those eight games.

"Really I thought we had a good game," said Senators coach D.J. Smith. "We had our chances to win in overtime and we didn't and they win in a shootout."

Like Ottawa, the Ducks have had their share of struggles and weren't pleased with their overall game.

"It wasn't a real good game to watch," said Ritchie. "We hung around for just the right amount of time and won in the shootout so we'll take it and move on."

The Senators tied the game early in the period as Batherson scored a power-play goal for his second of the season. Batherson, who played his 12th game since being recalled on Jan. 3, feels like he's gaining confidence with each game.

"I'm definitely feeling a lot more comfortable than I was at the start of the year," said Batherson. "I think if you ask any guy they're the same way. The more time they're here the more they get comfortable and that's how I'm feeling. I had some space to skate with the puck and that's what I tried to do."

Kase took a bounce off the back boards and tucked in a backhand to make it 2-1 at the 13:35 mark of the second period.

Anisimov's 10th of the season tied the game 2-2 with a power-play goal early in the third as he tipped Colin White's shot past Gibson.

Ottawa appeared to tie the game late in the period, but the Ducks challenged and upon review it was deemed offside.

Vladislav Namestnikov was hurt in the second period and did not return for the third period after he suffered a lower-body injury. His status for Thursday's game against Colorado was undetermined.

Notes: Anthony Duclair took the ceremonial faceoff for the Senators as Willie O'Ree dropped the puck as part of the NHL's Black History Month celebrations. Cody Goloubef and Mikkel Boedker were healthy scratches for the Senators.

This report by The Canadian Press was first published Feb. 4, 2020.