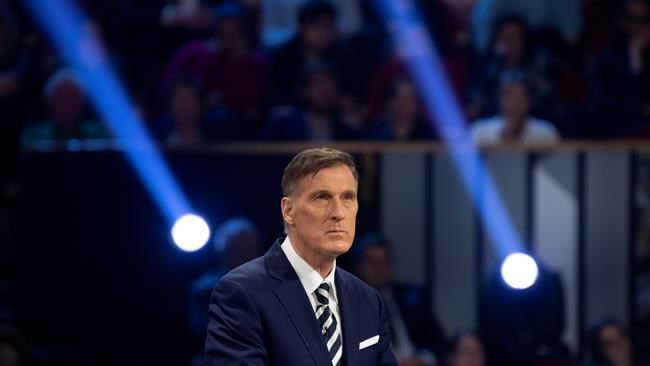 A former member of Parliament and leader of a fringe federal political party is suing a prominent political commentator and strategist for defamation.

Maxime Bernier alleges Warren Kinsella repeatedly branded him as a racist on social media and blog posts before, during and after the federal election campaign last year.

In his statement of claim, Bernier says those descriptions damaged his reputation and subjected him to public scandal and embarrassment.

A lawyer representing Kinsella says the suit is an effort to suppress public debate about Bernier's political views.

Kinsella has previously published a blog post in which he said there would be "no retraction" of past statements concerning Bernier.

The statement of claim, which has not been tested in court, says Bernier is seeking an admission of defamation along with $325,000 in damages.

Bernier was a former high-profile member of the Conservative party before founding the fledgling People's Party of Canada, which failed to win a single seat in the October election.

Bernier indirectly attributed his own and his party's performance to what he characterized as Kinsella's repeated attacks, according to the statement of claim.

The statement of claim alleged the remarks in question were made as part of a broader effort to publicly discredit Bernier.

It also alleges the Conservative party hired Kinsella and his consulting firm Daisy Group to run an anti-Bernier public relations campaign in the months leading up to the election.

Kinsella's lawyer, David Shiller, expressed confidence that the suit would not stand up to scrutiny in court. He described it as a classic attempt to silence discussion of a controversial political figure.

"Mr. Bernier is looking to suppress public debate about his very extreme right-wing views," Shiller said. "We will be looking at the statement of claim in more detail in the days to come and coming up with a strategy to vigorously defend all of the allegations."

Bernier founded the People's Party shortly after narrowly losing the Conservative party leadership race to Andrew Scheer in 2017. He said a right-wing alternative was necessary, declaring the Conservatives to be "intellectually and morally corrupt'' and lacking in true conservative principles.

While campaigning as People's Party leader, Bernier spoke out against what he called "extreme multiculturalism," promising to cut immigration levels and ensure new arrivals respond to Canada's economic needs.

He faced criticism from his rivals for not doing enough to weed out alleged racists from his party and for denying there's a scientific consensus that humans are responsible for climate change.

The statement of claim cites numerous posts on Kinsella's blog, social media accounts and podcasts that either explicitly call Bernier a racist or link him with figures such as former Ku Klux Klan leader David Duke.

"As a consequence of the campaign of defamation undertaken by the Defendants, Maxime's reputation has been seriously damaged," the statement said. "He has been held up to public scandal, ridicule and contempt, and he has suffered distress and embarrassment."

The statement of claim says Bernier served Kinsella with a notice of libel in December.

This report by the Canadian Press was first published Feb. 5, 2020.