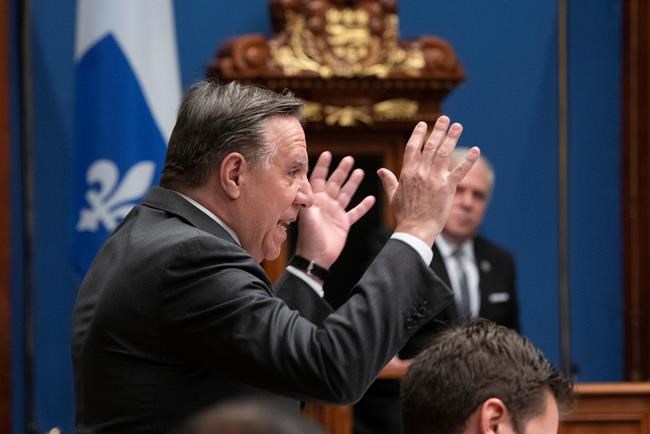 MONTREAL — Quebec Premier Francois Legault is dismissing naysayers who are accusing his government of wasting $30 million on a company that wants to build giant airships to transport heavy cargo around the province's far north.

The Journal de Montreal reported Tuesday that the previous Liberal government had rejected the project as too risky. That led the opposition to suggest someone at the province's investment arm must have been sniffing helium when they accepted the pitch from the French company, called Flying Whales.

But not only is the science behind the idea of cargo airships sound, the technology has been around for nearly 100 years, said professor Barry Prentice at University of Manitoba's Asper School of Business.

"There is no question the technology works," Prentice said in an interview Wednesday. Prentice, a transportation and supply chain management expert, also runs a research institute studying airship technology.

Airships disappeared from the skies in the 20th century for the same reason electric cars and windmills never took off during the same time period: fossil fuels. Jets took over the passenger airships, gas-powered vehicles dominated the roads, and coal-fired plants sprung up around the world, Prentice said.

But now electric cars and wind turbines are back, said Prentice. "The airships are just the next technology to follow the same pattern. But we aren't looking to transport passengers. Now we're talking about cargo."

Economy Minister Pierre Fitzgibbon of the current Coalition Avenir Québec government announced in November 2019 a $30-million investment in the French company, Flying Whales, as well as its Quebec subsidiary. The company, which also has Chinese backers, is hoping to use the airships to transport up to 60 tonnes of material at a time over regions that are difficult to access by road, such as the province's northern region.

Successive provincial governments have been trying to spark investment in Quebec's north to take advantage of its massive natural resources.

But on Tuesday, the Journal de Montreal reported the previous Liberal government didn't think the project would take off. And the paper cited anonymous experts who questioned how the aircraft would be supplied with the necessary ballast after dropping off its load in order to stabilize it and prevent it from flying away.

Prentice said water could be used as ballast — even though Quebec's far north is frigid most of the year.

"The transcontinental railways were all steam engines," Prentice said. "And we built those to go across the country in the 1880s. And they had to stop every hundred miles to take on water. Somehow we kept the water from freezing all winter long."

Fitzgibbon told reporters the French company's project was more advanced than it was when presented to the Liberals, adding he expected the airships to start flying by 2022-23.

But that didn't stop the opposition from trying to burst the government's bubble.

"I don't know if someone was inhaling helium ... but (the project) just doesn't make any sense," said Quebec solidaire's Vincent Marissal.

Legault said the critics would be proven wrong. The Flying Whales project is "brilliant," the premier told reporters Tuesday, adding it presented a modern way of transporting goods in the far north.

But professor Robert Gagne, director of the Center for Productivity and Prosperity at HEC, Universite de Montreal's business school, said Quebec's Flying Whales adventure is another sign of the government's "excessive" intervention in the market.

"When governments invest in something, you have to ask yourself, why aren't the bankers interested?" he asked in an interview Wednesday. Governments can generally take bigger risks than companies can, he said, because they don't have shareholders and spread the risk over the entire population.

He said Legault was elected to manage the province, "and he wants to take risks with our money. And we need to give him our blessing to play casino with our money. It's not the role of government ... it's not to become a major player in the market."

Prentice, however, said the Quebec government is correct to invest in the airship project.

"It's worth the risk to try," he said. "We're not talking about an anti-gravity device — this is a technology that was proven 100 years ago and we know it worked, just like wind turbines and electric cars."

This report by The Canadian Press was first published on Feb. 5, 2020.