Talks with Wet’suwet’en over pipeline ‘not successful,’ province says 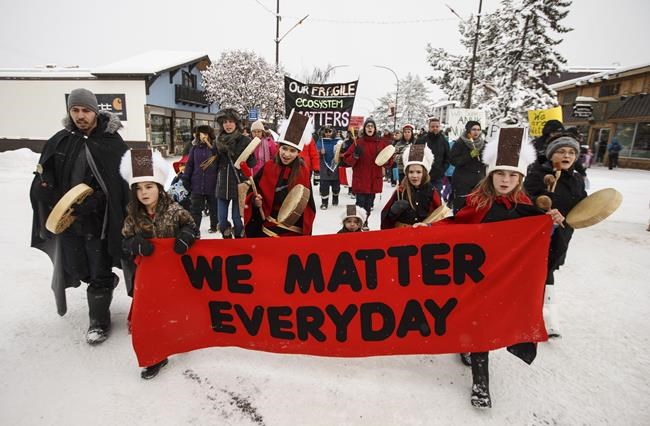 SMITHERS, B.C. — Talks that were intended to de-escalate a dispute over a natural gas pipeline in northern British Columbia have failed after just two days.

Hereditary chiefs of the Wet'suwet'en nation said they had agreed to seven days of negotiations with the provincial government in hopes of reaching a peaceful resolution that would avoid RCMP enforcement of an injunction on the First Nation's traditional territory near Houston.

"All of us are concerned about safety so that's one of the common themes," Fraser said in an interview from the airport in Smithers, the town where the meetings were held.

"What I was hoping that we all could agree to was even a temporary access protocol agreement similar to what was in place a year ago and to allow the company access, which is what the courts had ordered basically in its injunction."

RCMP held a news conference in Surrey on Wednesday to say the courts have left them no choice but to enforce the injunction, but they'd like to be able to do that peacefully.

Assistant Comm. Eric Stubbs said people could leave on their own or volunteer to be arrested and they'd be taken away without handcuffs, or they could be carried out.

"We want to use absolutely zero force, but our members are trained to respond and we will do that."

He said a team of officers has been assembled in the area.

Fourteen people were arrested more than a year ago when RCMP enforced an injunction that allowed pre-construction across Wet'suwet'en territory for the $6.6-billion natural gas pipeline, a key part of the provincially approved $40-billion LNG Canada development.

Following the enforcement, the chiefs reached a deal to allow workers temporary access to the site.

Fraser said the chiefs asked if the province would withdraw the environmental certificate it granted Coastal GasLink, but he said that wasn't an option.

"I explained that the project was given the OK in 2018. The project is underway, the courts have affirmed that the company has the legal right to work in the territory, so we had frank discussions about all of that."

There has been increasing tension since then, with RCMP saying traps "likely to cause bodily harm," including notched trees and stockpiles of fuel, had been found along a forest service road leading to the pipeline construction area.

An RCMP checkpoint limits access to the region, although hereditary chiefs maintain they hold sole title to the unceded lands and do not support the pipeline.

When the talks were announced last Thursday, RCMP said they would not take action to enforce the injunction by removing obstructions on the forest service road for seven days.

"We, the RCMP, share that concern and believe there are ways for safe, peaceful and lawful discourse or dissent without violence."

Police didn't say when officers would move to enforce the injunction.

Chief Woos, who also goes by Frank Alec, said Wednesday he expects enforcement of an injunction in the disputed area is now "imminent."

Woos said the talks were modeled around the nation's "Wiggus" process, named for a word that loosely translates to "respect." The process is rooted in trust and honesty and involves looking at issues together rather than beginning in oppositional positions.

The chiefs raised concerns during the meetings about the RCMP's growing presence in the region, which Woos estimated has included 60 to 100 officers congregating in neighbouring towns and regular fly overs of the disputed area.

Both Woos and Fraser said they are open to continued dialogue, however Woos said it should include Premier John Horgan, three more cabinet ministers and RCMP commissioner Brenda Lucki — a suggestion that Fraser said is unlikely in the near future on the government's end given that Parliament is back in session next week.

Coastal GasLink said in a statement that its senior leadership team has been in Smithers since Sunday to meet with the chief if required but were unable to do so.

The company needs to quickly resume construction activities in the area to meet the project schedule, it said.

"Coastal GasLink appreciates the time, effort and energy taken by Minister Scott Fraser and his staff, the Hereditary chiefs of the Wet’suwet’en and liaison Nathan Cullen to try and find a peaceful resolution to the issues at hand," the company said in a statement.

"We are disappointed that discussions have ended without a resolution that would prevent the enforcement of the interlocutory injunction."

— By Amy Smart in Vancouver.