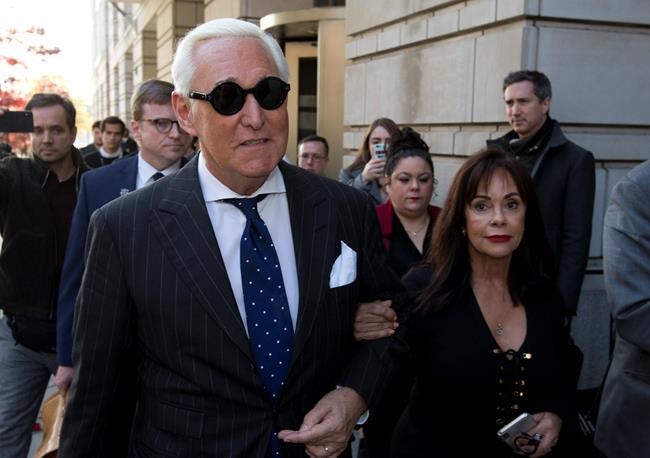 WASHINGTON — Federal prosecutors are asking a judge to sentence President Donald Trump's confidant Roger Stone to serve between seven and nine years in prison after his conviction on witness tampering and obstruction charges.

Stone, who is scheduled to be sentenced next week, was convicted in November of a seven-count indictment that accused him of lying to Congress, tampering with a witness and obstructing the House investigation into whether the Trump campaign with Russia to tip the 2016 election.

He was the sixth Trump aide or adviser to be convicted of charges brought as part of special counsel Robert Mueller’s Russia investigation.

In a sentencing memorandum filed Monday evening, prosecutors asked for Stone to serve between 87 and 108 months in federal prison, in accordance with federal sentencing guidelines. Such a sentence would send a message to deter others who might consider lying or obstructing a congressional probe or tampering with witnesses.

They charged in the filing that Stone “decided to double – and triple – down on his criminal conduct by tampering with a witness for months in order to make sure his obstruction would be successful.”

“Stone’s actions were not a one-off mistake in judgment. Nor were his false statements made in the heat of the moment. They were nowhere close to that,” prosecutors wrote in the court papers.

Trump, in an overnight tweet, called the situation “horrible and very unfair.” He added: “Cannot allow this miscarriage of justice!”

Stone has denied wrongdoing and consistently criticized the case against him as politically motivated. He did not take the stand during his trial and his lawyers did not call any witnesses in his .

The evidence presented in the trial didn’t directly address Mueller’s conclusion that there was insufficient evidence to prove a criminal conspiracy between the Trump campaign and Russia to tip the outcome of the 2016 presidential election in Trump’s . But it provided new insight into the scramble inside the Trump campaign when it was revealed in July 2016 that the anti-secrecy site WikiLeaks was in possession of more than 19,000 emails hacked from the servers of the Democratic National Committee.

Witnesses in the case testified that Trump’s campaign viewed Stone as an “access point” to WikiLeaks and tried to use him to get advance word about hacked emails damaging to Hillary Clinton.

Prosecutors alleged Stone lied to Congress about his conversations about WikiLeaks with New York radio host and comedian Randy Credico — who scored an interview with WikiLeaks founder Julian Assange in 2016, when he was avoiding prosecution by sheltering in the Ecuadoran Embassy in London — and conservative writer and conspiracy theorist Jerome Corsi.

During the 2016 campaign, Stone had mentioned in interviews and public appearances that he was in contact with Assange through a trusted intermediary and hinted at inside knowledge of WikiLeaks’ plans. But he started pressing Credico to broker a contact, and Credico testified that he told Stone to work through his own intermediary.

Earlier testimony revealed that Stone, while appearing before the House Intelligence Committee, named Credico as his intermediary to Assange and pressured Credico not to contradict him.

After Credico was contacted by Congress, he reached out to Stone, who told him he should “stonewall it” and “plead the fifth,” he testified. Credico also testified during Stone’s trial that Stone repeatedly told him to “do a ‘Frank Pentangeli,’” a reference to a character in “The Godfather: Part II” who lies before Congress.

Prosecutors also charged that Stone had threatened Credico’s therapy dog, Bianca, saying he was “going to take that dog away from you.”