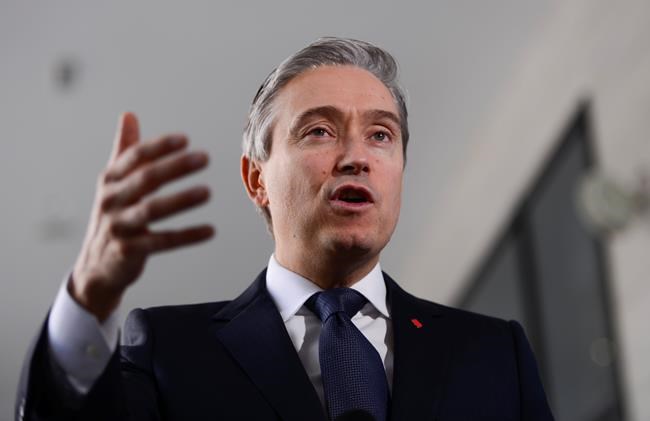 OTTAWA — Japanese authorities might soon allow people quarantined aboard the Diamond Princess cruise ship near Tokyo, where 12 Canadians have contracted the novel coronavirus, to disembark and finish out their isolation on land.

The 3,500 passengers on the ship have been under quarantine since last week, and so far 218 have tested positive for the disease, which the World Health Organization has dubbed COVID-19.

It's the biggest concentration of confirmed cases outside of mainland China, according to the World Health Organization

The 12 Canadians who contracted the virus on board the ship have been moved to Japanese health facilities, and at least three require hospitalization, Champagne said.

Champagne said emergency response teams and consular officials are in Japan to make sure Canadians are receiving the help they need.

"We know that there are some people who need medications on board, they want to have contact with their families, we're facilitating that," Champagne said at a briefing in Senegal, where he is on a diplomatic trip.

Japan plans to move passengers who wish to leave the ship in phases, with the most "medically vulnerable" guests being moved in the first phase, according to Princess Cruises, the line that owns the Diamond Princess.

That first group of people will be tested for the virus, and if they test negative will be taken to a quarantine housing facility, the cruise line said in a press release.

If they test positive they'll be moved to a health facility.

The shore-side quarantine centre will include individual rooms with private bathrooms, and while passengers will continue to receive their medical prescriptions they will not have access to specialized or western meals. They will be served Japanese bento boxes for the duration of the quarantine, according to the release.

Everyone who wishes to stay on the ship will be allowed to do so.

Champagne said about 250 Canadians on a separate cruise ship off the shore of Cambodia, the Westerdam, have tested negative for the coronavirus and will be returned to Canada at the expense of the cruise line, Holland America.

As for Canadians still in the centre of the viral outbreak, Champagne said all the 400 or so Canadians who wished to leave Hubei, the Chinese province that includes the city of Wuhan, have been repatriated and are quarantined in southern Ontario, at Canadian Forces Base Trenton.

There are still permanent Canadian residents in Hubei, he said. Though Chinese authorities initially stipulated that only Canadian passport holders would be able to leave the quarantined region, they seem to have relaxed that rule, Champagne said, but he did not elaborate on whether Canada would make arrangements to fly more of them out.

The last flight chartered by the Canadian government to evacuate people from the city of Wuhan, which landed at CFB Trenton on Tuesday, was the last the government plans to send to the region. Those Canadians who chose to stay behind in Hubei have been provided with consular services, Champagne said.

This report by The Canadian Press was first published Feb. 13, 2020.