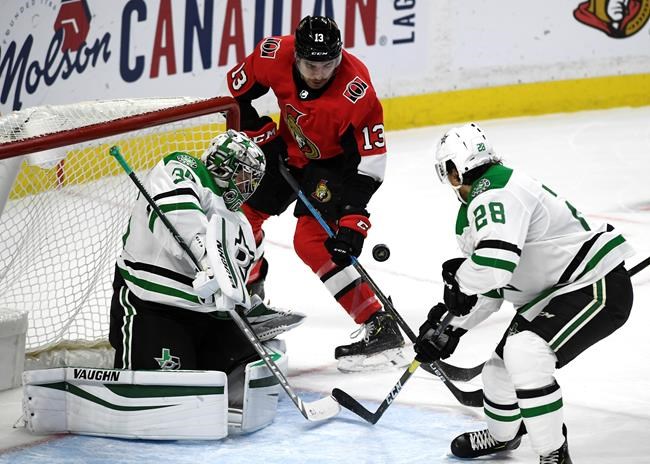 OTTAWA — The Ottawa Senators are all about youth this season, but on Sunday it was a 31-year-old veteran who got them the win.

Artem Anisimov scored at 3:48 of overtime to give the Ottawa Senators a 4-3 victory over the Dallas Stars.

“I thought he was patient, I thought he passed the puck, he broke out well and had some offensive chances,” said Senators coach D.J. Smith. “We haven’t used him much as we continue to develop the young kids. In overtime I just kind of wanted to use everybody. Everyone kind of got a shot. Brady (Tkachuk) made a good play and he ended it.”

Tkachuk finished the night with a goal and two assists, and in just his second year has already taken on a leading role with the Senators.

“He is really hard working and never gives up on the play,” Anisimov said of Tkachuk. “He does all the stuff. He blocks shots, he hits people, goes to the net and can make plays around. He plays really well.”

Both teams were playing their third game in four nights. Ottawa was coming off a 4-2 loss to Toronto on Saturday, while the Stars beat the Canadiens 4-3 in overtime in Montreal on the same night.

“I thought we were pretty solid from start to finish,” said Anderson. “There was no lulls in our game. We were 20 guys pulling on the rope at the same time. We were playing fast, playing hard, possessing the puck when we had to. I don’t think we punted the puck too many times. I thought for sure we were playing with more poise and more confidence.”

“There’s no bad points in this league,” said Stars interim head coach Rick Bowness. “We knew going into this month that seven of our first nine were on the road. We haven’t lost one in regulation so we’ll take it, but you know me, we’re never satisfied. We just want to keep pushing for those points.”

Ennis broke a 2-2 tie midway through the third as he picked up a rolling puck and backhanded it into an open net.

The Stars tied it at 14:49 when Tyler Seguin found a trailing Pavelski to beat Anderson stick side.

“He’s flying,” said Bowness. “When he’s playing like that you need to get him out there as much as you can.”

The Senators outshot the Stars 19-12 in the second period, but the game stayed 2-2 with all four goals coming in the first period.

The Stars got lucky on the opening goal as Klingberg’s shot deflected off Nikita Zaitsev’s skate and right past Anderson at 3:03.

Ottawa tied it on a power-play goal by Pageau as he buried a one-timer off a great pass by Tkachuk at 7:36. The Senators took the lead late in the period as Anthony Duclair picked up his own rebound and fed Tkachuk, who had a wide-open net at 18:10.

The Stars tied the game 33 seconds later when Seguin won the draw and Johns’ slapshot made its way through from the blueline.

Duclair has gone 21 games without a goal, but he’s still creating chances and if not for some big saves by Khudobin could have had a couple on this night.

“He’s playing well,” said Smith. “He’s skating well, he looks more confident. I thought (Sunday) was his best game in 10. He was dangerous. He looked like he did when he was scoring every night.”

Notes: Ottawa’s Nick Paul played in his 100th career game. Dallas D Roman Polak was back in the lineup after being a healthy scratch Saturday night.

This report by The Canadian Press was first published Feb. 16, 2020.