Baloney Meter: Rail blockades and government authority over the police 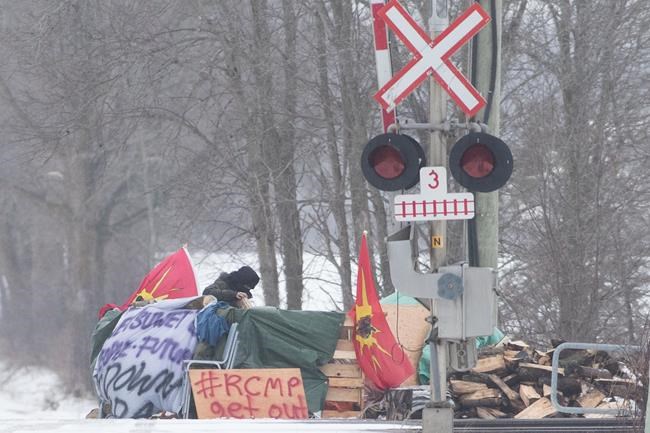 OTTAWA — "The RCMP Act is clear: the minister of public safety has the ultimate authority over Canada's national police force, and has the power to direct the RCMP to enforce the law. ... So do the right thing, Prime Minister Trudeau. We cannot allow a small number of activists to hold our economy hostage and threaten thousands of jobs. Pick up the phone, tell (Public Safety) Minister Blair to put an end to this situation." — Conservative Leader Andrew Scheer, Feb. 14, 2020.

The federal Conservatives are decrying layoffs that have resulted from rail blockades across Canada in support of Indigenous objections to a British Columbia natural-gas pipeline. The Tories are calling on the Trudeau government to tell the RCMP to step in and enforce injunctions to remove the blockades, saying the law governing the national police force clearly permits such direction.

How accurate is the Conservative claim?

The Canadian Press Baloney Meter is a dispassionate examination of political statements culminating in a ranking of accuracy on a scale of "no baloney" to "full of baloney." This one earns a rating of "a lot of baloney": The assertion is the statement is mostly inaccurate but contains elements of truth.

The Governor in Council may appoint an officer, to be known as the Commissioner of the Royal Canadian Mounted Police, to hold office during pleasure, who, under the direction of the Minister, has the control and management of the Force and all matters connected with the Force.

In addition, section 18 of the act says:

It is the duty of members who are peace officers, subject to the orders of the Commissioner,

(a) to perform all duties that are assigned to peace officers in relation to the preservation of the peace, the prevention of crime and of offences against the laws of Canada and the laws in force in any province in which they may be employed, and the apprehension of criminals and offenders and others who may be lawfully taken into custody;

(b) to execute all warrants, and perform all duties and services in relation thereto, that may, under this Act or the laws of Canada or the laws in force in any province, be lawfully executed and performed by peace officers;

(c) to perform all duties that may be lawfully performed by peace officers in relation to the escort and conveyance of convicts and other persons in custody to or from any courts, places of punishment or confinement, asylums or other places; and

(d) to perform such other duties and functions as are prescribed by the Governor in Council or the Commissioner.

University of Toronto law professor Kent Roach has pointed out that the doctrine of police independence, as recognized in a 1999 Supreme Court decision (Campbell and Shirose), seems to qualify the terms of Section 5 of the RCMP Act. In the decision, then-justice Ian Binnie wrote:

"While for certain purposes the commissioner of the RCMP reports to the solicitor general (now known as the public safety minister), the commissioner is not to be considered a servant or agent of the government while engaged in a criminal investigation. The commissioner is not subject to political direction. Like every other police officer similarly engaged, he is answerable to the law and, no doubt, to his conscience."

Roach, an authority on law-enforcement powers, wrote in 2011 that "with respect to most criminal investigations, (the Campbell decision) stands for the proposition that police officers enjoy independence from the executive and should not be directed by their minister either to commence or to stop a criminal investigation or to make or not make an arrest or to lay or not lay a charge."

The Supreme Court decision "did not specifically address enforcing injunctions but I would include them," Roach told The Canadian Press in an interview.

Wayne MacKay, a professor emeritus of law at Dalhousie University in Halifax, said politicians have generally been reluctant to become directly involved in ordering the police to do things that are considered front-line operations.

The federal cabinet can issue regulations and directives to the RCMP. However, MacKay says, "It would be pretty unusual to make a regulation about a very specific event or a thing like this. Regulations generally would be much broader in scope."

"Police independence is crucial to public trust in our institutions," said Mary-Liz Power, a spokeswoman for Public Safety Minister Bill Blair. "The minister may not attempt to influence in any way an investigation, or direct the conduct of specific police operations. Our government is committed to protecting the constitutional right to lawful peaceful protest, keeping Canadians safe and upholding the rule of law."

In its landmark decision, the Supreme Court of Canada said police independence, in the context of criminal investigation, "underpins the rule of law." Legal experts agree on the importance of the time-honoured principle of the police acting at arm's length from the state in day-to-day operations.

For these reasons, the claim that the government can order the RCMP to step in contains "a lot of baloney."