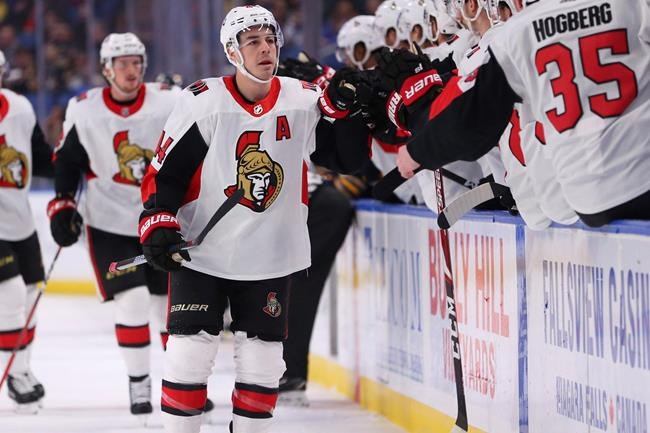 OTTAWA — Jean-Gabriel Pageau had trouble dealing with the stress of the NHL trade deadline.

The Ottawa Senators centre learned he had been traded to the New York Islanders for draft picks early Monday morning, putting an end to an emotional stretch.

"I was puking last night (less than 24 hours before Monday's 3 p.m. ET deadline)," Pageau said with a laugh during a conference call. "It was something that I had never really been through and didn't know what it was like. It was harder than I would have expected.

"Mentally, just thinking about so many different things that could happen to me. It was stressful and I'm glad it's over now and I can focus on my goal, which is winning."

Pageau, Ottawa's scoring leader this season, is the latest homegrown player to be moved at the deadline as the Senators continue to amass picks as part of their ongoing rebuild. The Senators acquired a conditional first-round pick in 2020, a second-round selection in 2020 and a conditional third-rounder in 2022 for the Ottawa native.

The 2020 pick will slide to 2021 if it falls in the top-3 at June's draft, while the third-round selection in 2022 will only be heading to the nation's capital if the Islanders win the Stanley Cup this spring.

"Sometimes you have to weigh the pros and the cons about everything that you're trying to do in a rebuild," said Senators general manager Pierre Dorion. "This was part of the plan. If we couldn't get him signed, we needed a fair return, but we know we have the depth ... to move on from a Jean-Gabriel Pageau, as painful as it might be. It's painful for everyone, but at the same time we know we're going to be in a good place moving forward."

The 27-year-old Pageau is on pace for a career year with 40 points (24 goals, 16 assists) in 60 games. He was considered one of the top players potentially available on the market.

Hours after the trade, the Islanders signed Pageau to a six-year contract extension with an average annual value of US$5 million.

Pageau admitted his first choice was to remain in Ottawa, but got a new understanding for the game when he and the Senators couldn't come to an agreement.

"In the last few days, I realized hockey really is just a business," he said. "I'm not mad at anyone. Yes, I'm disappointed. Ottawa is my home, but I'm an adult and I can live with certain decisions and my own decisions. I'm just excited for what's ahead."

Efforts to sign Pageau — taken in the fourth round, 96th overall, in the 2011 NHL draft — were made, but once again the Senators failed to sign a veteran to an extension. Last year, Senators star Mark Stone was traded to Vegas after the two sides failed to come to terms on a new contract. Veterans Ryan Dzingel and Matt Duchene also were shipped out last year, while former captain Erik Karlsson was dealt prior to training camp in 2018.

"The process was we were in contract negotiations for the last little while," said Dorion of Pageau. "We felt that we made good progress on a contract and at a certain point and time we saw that the contract couldn't be done and from then on we started looking at options of possibly moving him."

Dorion admitted the trade was bittersweet.

"Today was probably the toughest call I've ever made as a general manager," said Dorion. "It was very difficult to tell Jean-Gabriel that he was traded ... I can tell you I don't get very emotional a lot with players, but today was a very difficult call to make with him."

Few will forget Pageau's playoff hat trick against the Montreal Canadiens during his rookie season, but his four-goal performance against the New York Rangers in Game 2 of the second round of the 2017 playoffs will likely be his legacy, scoring his fourth in overtime for the win.

Only forward Bobby Ryan and goalie Craig Anderson remain from the team that made the 2017 run to the East final.

Pageau won't have to wait long to face his former teammates as the Islanders play in Ottawa on March 5.

"I think the first thing traded players do is look when they face their old team for the first time," said Pageau. "For sure I'm excited that it's next week. It will be emotional as I have so many great memories at the rink."

Also Monday, the Senators acquired a fourth-round pick from the Colorado Avalanche for Vladislav Namestnikov, while forward Tyler Ennis was sent to the Edmonton Oilers for a fifth-round pick in 2021.

Ottawa made another small move acquiring forward Matthew Peca from the Montreal Canadiens in exchange for minor-league centre Aaron Luchuk and a seventh-round pick in 2020.

Ottawa currently has the third-worst record in the league. But the Senators should have two lottery picks this year — their own and the one acquired from the San Jose Sharks in the Erik Karlsson trade in September 2018 — and could have as many as 13 selections, including nine in the first three rounds.