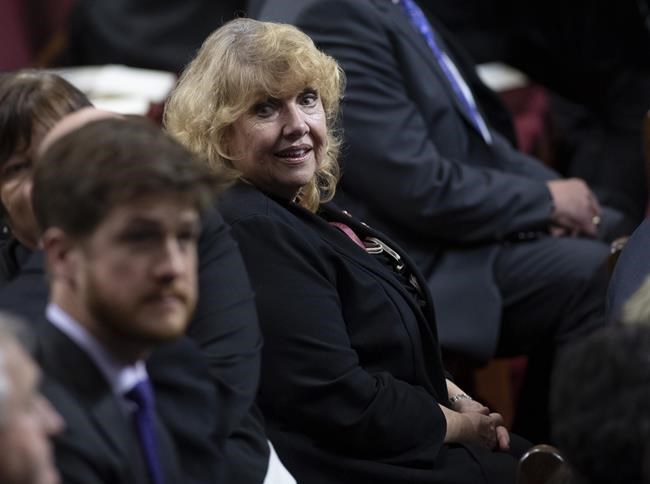 OTTAWA — Sen. Lynn Beyak sought to stave off suspension from the upper chamber Tuesday, pledging to do more to make amends for the harm she caused by posting offensive letters online.

"I would like to unreservedly apologize for my actions," she told the Senate.

"After deep and careful reflection, I have come to the view that the posting of offensive and hurtful letters to a Senate public website was wrong and ill-considered and my insistence on leaving them up was also wrong."

The letters were sent to Beyak, a senator from Ontario, in support of her defence of the residential school system. While the Truth and Reconciliation Commission concluded the system caused horrific abuse and alienation for generations of First Nations, Metis and Inuit children, Beyak has suggested there were benefits to the program that have been overshadowed.

The letters she received and published online echoed her views but some also went further, including suggestions that Indigenous Peoples and their cultures were inferior.

As controversy grew, Beyak defended the decision to make and keep the letters public. She said they weren't racist and removing them would be an affront to free speech.

She said Tuesday she now believes she was in the wrong.

"They were disrespectful, divisive and unacceptable," she said of the letters.

"While my intent was never to hurt anyone, I see now that my actions did not have their desired effect, which was to promote open and constructive dialogue. Regretfully, my actions were unhelpful to the national conversation on this issue."

Her refusal to take the letters down got her kicked out of the Conservative caucus and eventually, temporarily suspended from the Senate. To end her suspension, she was to fully apologize and complete education programs on racism towards Indigenous Peoples. But her suspension automatically ended when Parliament dissolved for the 2019 federal election.

Beyak had said in November she felt she fulfilled the requirements. But last month, the Senate ethics committee concluded she'd not gone far enough. The committee said the apology she offered at the time was insufficient and she did not fully finish the education program. The senators on the committee recommended her suspension be reinstated.

The Senate must vote on whether to support that recommendation. When that vote might take place is uncertain; on Wednesday, the Senate is expected to vote on whether the committee should now re-examine the issue.

On Tuesday, Beyak said she is ready to "engage swiftly and meaningfully in the process," and complete the training.

She offered a broader apology to Indigenous Peoples, the Senate, and to Canadians, and said she has learned from the experience.

"We are never too old to learn and to grow," she said.

This report by The Canadian Press was first published Feb. 25, 2020.