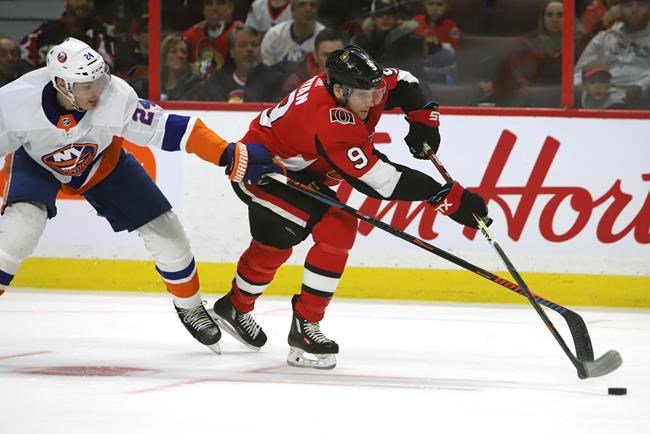 OTTAWA — The Ottawa Senators were more than happy to spoil Jean-Gabriel Pageau's homecoming.

Pageau made his return to Ottawa on Thursday, 11 days after being traded to the Islanders, in New York's 4-3 loss to the Senators.

Pageau, who signed a six-year contract extension hours after the trade, has two goals in five games with the Islanders but was held off the scoresheet Thursday as the Islanders (35-23-8) failed are to gain ground in the playoff race.

"It's disappointing to obviously lose this one," said Pageau. "We need all the points right now and we need to find our game as fast as we can. I think we need more urgency in our game."

The Islanders currently hold the final wild card spot in the Eastern Conference with 76 points, but have lost five straight (0-3-2).

Craig Anderson made 37 saves after having lost his previous three starts.

"(Anderson) was good," said Senators head coach D.J. Smith. "We hung up out there in Pittsburgh. We don't have a lot of home games left and there was a crowd there, guys were pumped up wanting to win and (Anderson) held us strong and gave us an opportunity to win.

"We had some guys who played hard. That's a really good hockey team, but ultimately (Anderson) was the difference (Thursday)."

Connor Brown, Mikkel Boedker, Anthony Duclair and Brady Tkachuk each scored for the Senators (24-32-12), who hadn't defeated the Islanders since Dec. 1, 2017.

Pageau, an Ottawa native, was given a video tribute during the first television timeout and fans were quick to start chanting his name as they often did when he scored. The 27-year-old went for a quick skate near the bench to acknowledge the reception.

"The appreciation from the fans, my ex-teammates on the bench was really touching," said Pageau. "There was a lot going through my mind and I was trying to stay focused on the game. Obviously, I can thank everyone now and turn the page and focus on the rest of the season here."

Anders Lee, Mathew Barzal and Ryan Pulock scored for the Islanders, who have been outscored 14-5 in the last three games. Semyon Varlamov stopped 25 shots.

The Islanders had the lead twice, but failed to hold on. New York also hit three posts on the night.

"It's really disappointing," said Islanders coach Barry Trotz. "I don't want to take nothing away from the Senators, they played a very hardworking, north game and capitalized on the chances we gave them and we didn't capitalize enough on ours."

The Islanders were pressing for the equalizer in the third period, but the Senators took a 4-2 lead with just over three minutes remaining as Tkachuk picked up his 20th.

New York made it a one-goal game 65 seconds later when Pulock beat Anderson.

The Islanders put 18 shots on Anderson in the second period, but trailed 3-2 after 40 minutes.

New York took a 2-1 lead early in the second when Jordan Eberle dropped a pass back to Barzal, who fired a wrister from the slot.

The Senators tied the game as Boedker scored shorthanded. Ottawa leads the league with 15 short-handed goals this season.

Boedker, who has played just 16 games this season, has been a new addition to the penalty kill and is relishing the opportunity.

"I haven't spent much time out there, but it's fun," said Boedker. "It's getting out there and seeing if you can disrupt their power play and (Chris) Tierney made a really good play and then it was just a matter of getting it on the net and a hard shot and it went by him so it was really nice."

Duclair gave Ottawa its first lead of the game as he beat Pageau for positioning and scored a pretty goal shortside, top shelf, at 14:26 of the second.

The Islanders opened the scoring with a power-play goal when Lee potted his 20th of the season, going top shelf on Anderson at 3:58 of the first.

Ottawa tied the game when Brown tucked in a Nikita Zaitsev rebound at 13:57.

Notes: Ottawa's Duclair returned to the lineup after missing the last four games. Artem Anisimov was out with an upper-body injury.

This report by The Canadian Press was first published March 5, 2020.