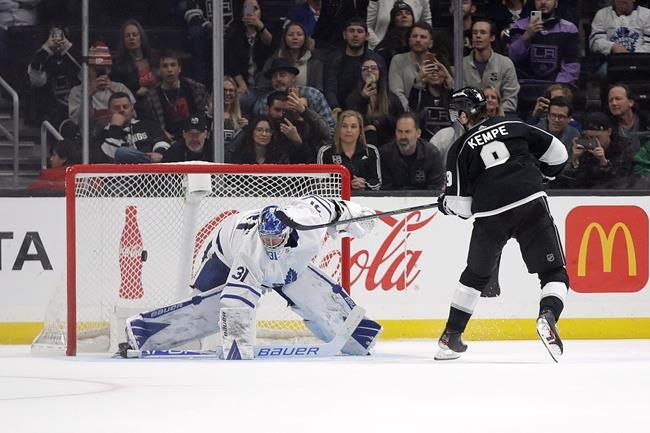 TORONTO — With the Maple Leafs' locker room closed to reporters amid concerns about the spread of the novel coronavirus, players were trotted out one by one Monday to a podium in the media lounge down the hall at Scotiabank Arena.

Toronto centre Auston Matthews cracked a little smile as he stepped in front of the cameras.

While that setup is the new reality for the time being, the Leafs also need to change their results on the ice before a 2019-20 season that started with high hopes slips through their collective fingers.

Toronto limped home following last week's disastrous California road trip where the club lost to three of the NHL's bottom-5 teams in the span of four days — 5-2 to San Jose, 1-0 in a shootout to Los Angeles and 2-1 to Anaheim.

Commitment and fight were among the buzzwords after the Leafs' last tough stretch — which of course included a defeat to a 42-year-old emergency backup goalie/Zamboni driver.

But while their play without the puck and effort has largely improved, the concern this time around includes the fact the NHL's second-highest scoring team is suddenly firing blanks.

Three goals in 185 minutes of action won't cut it for a team that once again finds itself just a point ahead of Florida for the third and final playoff spot in the Atlantic Division following the Panthers' 2-1 victory over St. Louis on Monday.

"We definitely recognize that our results out west were not acceptable," Toronto head coach Sheldon Keefe said. "Our guys know what's at stake.

"But they're a little confused, I guess, themselves in terms of why we've been so hot and cold."

Keefe, who started 15-4-1 after replacing Mike Babcock on Nov. 20, but is just 11-11-4 since, continues to search for that elusive consistency from his talented group.

"It's just amazing how all these things fall into place. There's definitely some structure pieces that have some tactical elements to it, but we've got to work."

After stumbling against some of the league's weakest rosters, Toronto has games against two of the NHL's top-3 clubs this week — home to Tampa Bay on Tuesday and in Boston on Saturday — bracketing Thursday's matchup at Scotiabank Arena with Nashville, which is in its own playoff fight.

"A bit of a roller-coaster ride these last couple of weeks with how we've been playing," Leafs winger Mitch Marner said. "It's something that we're not happy with and know we've got to change."

Marner suggested unplugging from social media in the wake of the most recent slide, something Matthews suggested is sometimes easier said than done.

"People are pretty ruthless," he offered with another smile. "If you're not feeling too good about your game or you maybe had a couple turnovers, probably don't check your Twitter mentions after and see all the profiles with no headers or no pictures just absolutely shredding your life in half.

"A lot of times you can take a look and laugh. And then sometimes — your mental health is so important — just stay off and get away from it."

Keefe shook up his top two lines at Monday's practice, which came after the team's official photograph, with William Nylander moving up alongside Matthews and Zach Hyman. John Tavares, meanwhile, was back centring Marner, who he had great chemistry with last season, and Kasperi Kapanen.

"With the type of skill and the talent we have ... that can lend to a lot of great combinations," Tavares said. "We want to go out there and produce more and create more opportunities, and get back to the way we're able to put the puck in the net."

"We just want to find some more consistency in our game and take it from there," added Matthews, who sits third in the NHL this season with 46 goals and has a long history with Nylander.

The Leafs should also get a boost, possibly as early as Tuesday, with the return of Morgan Rielly to the lineup.

The star defenceman has been out since breaking his foot Jan. 12, and watching the last 23 games was a challenge.

"There were lots of ups and down," Rielly said. "This time of year, that's not a good thing, necessarily. You want to be a little bit more consistent than we had been. It's tough to watch, there's no question about it. But that being said, there were nights where they played very well. I was at home watching them feeling a lot of pride about how the guys played.

"You can take those good things out of it. Hopefully when I come back I'll be able to contribute in a positive way."

With just 13 games left on their schedule, the Leafs need all the help they can get.

This report by The Canadian Press was first published March 9, 2020.