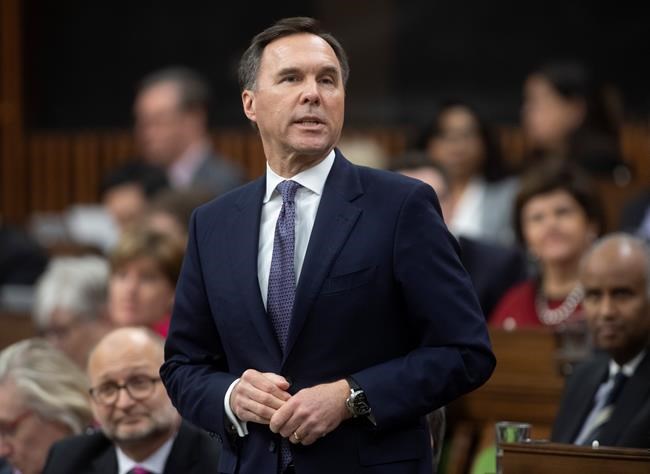 OTTAWA — The federal Liberals will deliver the first budget of their minority mandate at the end of the month.

Finance Minister Bill Morneau told the House of Commons on Wednesday that the federal Liberals will deliver the 2020 budget on March 30.

Morneau has said the budget will have a climate lens, but the outbreak of the novel coronavirus has changed some spending plans.

The finance minister said last week the budget will likely include an increased contingency cushion should the economic hit from COVID-19 be prolonged and deep.

The cushion amounts to projected revenues the government sets aside annually as a shock absorber if the money doesn't materialize due to an economic downturn, and also counts against the deficit.

The deficit is projected to be $28.1 billion before any new spending the Liberals will add to meet platform commitments, such as the first steps towards a national pharmacare program.

Speaking in the House of Commons, Morneau touted the federal government's fiscal position as a way to deal with economic challenges facing the country from the novel coronavirus outbreak and a drop in oil prices.

"We're trying to ascertain the depth and the length, the duration of this challenge," Morneau told reporters afterwards.

"Obviously as facts emerge they are going to enable us to decide how we should best respond. The budget will be an important time for responding."

The spending blueprint will also be a political test for the Liberals who need the support of enough opposition MPs to get the budget approved. Otherwise, the government would fall on the confidence vote.

Multiple bank forecasts now have GDP growth below one per cent for the entire year. Morneau said the budget will update economic forecasts to show what the situation is today, and how that forms the basis on the government's planning.

An oil price war between Saudi Arabia and Russia that has lowered the cost of crude below budget projections is further compounding problems for the economy. The combination of low oil prices and slower growth could shave billions from federal revenues.

This report by The Canadian Press was first published March 11, 2020.