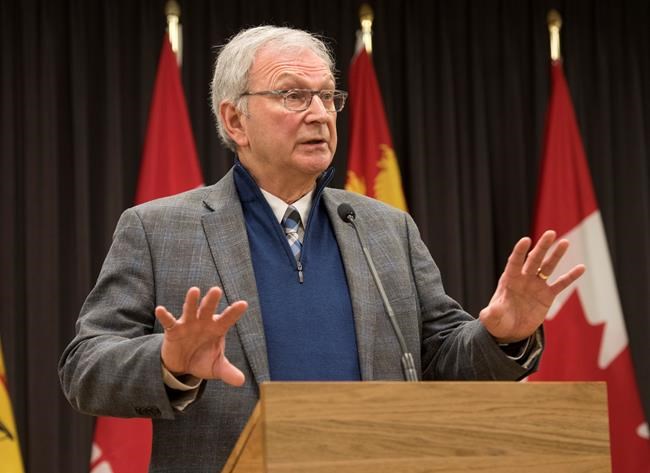 FREDERICTON — New Brunswick is suspending jury trials for two months over concerns about the potential spread of novel coronavirus after the province's first case of COVID-19 was confirmed Thursday.

Queen's Bench Chief Justice Tracey DeWare said she made the decision after conferring with the Department of Health and the province's chief medical officer.

"This exceptional decision is not taken lightly and will remain in place until such time as measures are put in place to ensure jury selection and a jury trial can take place with minimal public health risk to those citizens affected," she wrote in a letter to Justice Minister Andrea Anderson-Mason.

The suspension of jury trials is to begin immediately and last until May 12.

"In the event the presence of COVID-19 remains a public health threat following May 12, additional screening procedures will be put in place to allow for the continuation of jury trials within parameters that do not unnecessarily burden those who may be at particular risk as a result of this unfortunate illness."

Dr. Jennifer Russell, chief medical officer, said health officials learned Wednesday that a woman between 50 and 60 years old living in the southeastern area of the province was "minimally symptomatic" after returning from a trip to France.

The woman remains in isolation in her home, and Russell said her case can be described as a mild to moderate infection.

Russell would not say what area of France the woman visited or which airports she was in on her trip home, citing privacy concerns.

Russell is recommending that all non-essential gatherings of 150 people or more be cancelled or postponed until health officials are better able to determine the risk to the population.

"It's a topic of discussion right across the country, and obviously in the provinces that have many cases right now, these are the steps that they're taking," she said.

New Brunswick Premier Blaine Higgs decided not to attend the first ministers meeting in Ottawa Thursday, but later in the day it was announced that the meeting would be held via teleconference.

Prime Minister Justin Trudeau and his wife Sophie Gregoire Trudeau are in self-isolation after she began showing mild flu-like symptoms.

"I think with technology today there's every reason why we can do it from a distance. I do have a call tomorrow with my colleagues and Deputy Prime Minister Freeland on COVID-19," Higgs said Thursday.

He said the situation is changing day to day, even hour to hour, so the province could consider all options including closing schools.

A presumptive case of COVID-19 has been announced in neighbouring Maine. Higgs said he understands the case is in southern Maine, and so far no changes have been made to restrict travel across the Maine-New Brunswick border.

On Thursday, the New Brunswick government formed an all-party committee to address the novel coronavirus.

Higgs said the committee will provide oversight and direction on how to respond to the health issue.

The members include the premier and three other party leaders as well as the ministers of health, education, public safety and social development.

The Opposition Liberals have vowed to vote against the provincial budget in an effort to topple the minority Tory government.

Roger Melanson, the Liberal finance critic, said it's too early to say if the COVID-19 concerns would have an impact on whether his party would try to force an election.

But late in the day, Liberal Leader Kevin Vickers issued a statement saying his party would support a move by government to delay next week's vote on the budget.

This report by The Canadian Press was first published March 12, 2020.