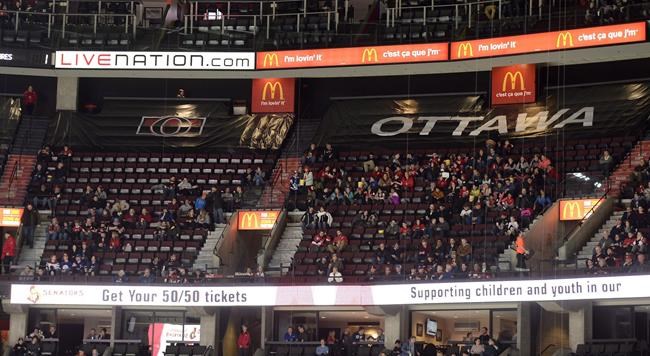 OTTAWA — An Ottawa Senators player has tested positive for COVID-19, becoming the first NHLer to be diagnosed with the coronavirus.

The Senators did not name the player when releasing the news Tuesday night.

The team said in a statement that the player has had mild symptoms and is in isolation.

The statement added that the organization is in the process of notifying anyone who has had known close contact with the athlete and is working with team doctors and public health officials.

The Senators have asked all of their players to remain isolated and says its medical staff will be monitoring the health of the players.

The NHL suspended its season last Thursday because of the COVID-19 outbreak.

The Senators played a game in San Jose, Calif., against the Sharks on March 7 despite the county where the arena is located recommending no large public gatherings days earlier. It was one of three NHL games played in San Jose after the recommendation.

The Senators stayed in California for games against the Anaheim Ducks and Los Angeles Kings before the season was suspended.

The Senators' game at the Staples Center last Wednesday came one day after the NBA's Brooklyn Nets — who announced they had four players test positive for COVID-19 on Tuesday — played at the same arena against the Los Angeles Lakers.

The NHL's decision to suspend its season came less than 24 hours after the NBA did the same thing following a positive COVID-19 test for Utah Jazz star Rudy Gobert. Most other leagues and sports events have made similar moves in the past week.

Besides the four Nets and Gobert, Utah's Donovan Mitchell and Detroit's Christian Wood are the other NBA players who have tested positive.

The Nets did not name the players Tuesday, but Brooklyn star Kevin Durant told The Athletic he was one of them.

This report by The Canadian Press was first published March 17, 2020.