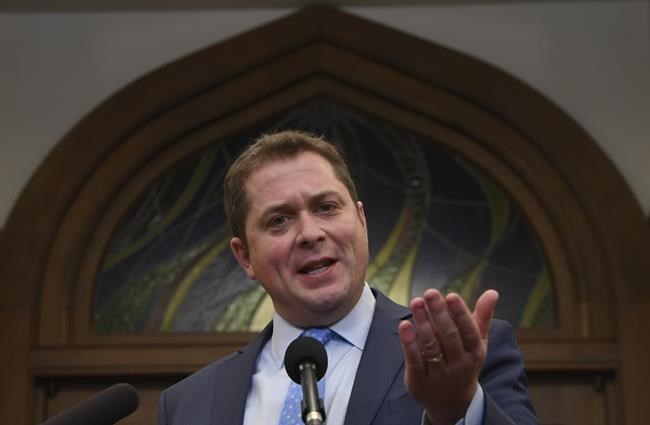 OTTAWA — Hours before introducing a bill to spend up to $82 billion and increase federal powers to fight the COVID-19 pandemic, the Liberals backed off a measure that the Opposition decried as an attempt to get Parliament to sign them a blank cheque.

While Conservatives said they were prepared to quickly approve the billions in emergency financial aid and economic stimulus as promised by Prime Minister Justin Trudeau last week, they balked at a proposal to give the government sweeping new powers for up to 21 months to unilaterally spend, borrow and tax Canadians without seeking Parliament's approval.

The unprecedented proposal was in a draft of the emergency legislation to be tabled in a scaled-down Parliament on Tuesday.

The government has been negotiating with opposition parties to whip the bill quickly through the House of Commons within a few hours, followed by swift approval by the Senate on Wednesday and royal assent immediately after that.

Ordinarily, the power to impose taxes and allocate the proceeds is in the hands of Parliament, not ministers, and a government falls if the House of Commons won't support its budgetary plans.

Government House leader Pablo Rodriguez tweeted late Monday night that the government would change its draft bill before introducing it.

"We will always work collaboratively and respect the fundamental role of Parliament," the Montreal MP wrote.

Liberals need the unanimous consent of all the MPs appearing in the House of Commons to quickstep the bill through in a matter of hours.

Government sources, who spoke on condition of anonymity because they were not authorized to discuss the bill before it's tabled, said the 21-month timeframe for the extraordinary powers was always negotiable, aimed at giving the government the flexibility to act quickly to provide relief during the crisis without having to wait for a week to organize a recall of Parliament if something new is required.

Except for the emergency sitting, the Commons is officially adjourned until April 20, and probably longer.

In a statement late Monday, Conservative Leader Andrew Scheer said his party is willing to enact the measures Trudeau announced last week, which include expanding the Canada Child Benefit and GST credits, relaxed Employment Insurance rules and $55 billion worth of deferred taxes.

"In a crisis, broad all-party agreement is essential, especially when the government has a minority in the House of Commons. And we are prepared to have Parliament sit as needed to transact the business of Parliament," he said.

"But we will not give the government unlimited power to raise taxes without a parliamentary vote. We will authorize whatever spending measures are justified to respond to the situation but we will not sign a blank cheque."

The government would not normally share a bill with opposition parties before tabling it in the Commons. Given how little time is planned for debate on this bill, however, opposition parties were given a draft so they'd have a chance to digest the details and speak on the legislation intelligently.

By late Monday, both Global News and the Globe and Mail were reporting that they'd been shown the draft bill.

According to Global, it would allow any cabinet minister, with the approval of Finance Minister Bill Morneau, to dispense "all money required to do anything" during a public health emergency.

The Globe reported that the bill would also give the government the power to change taxation levels through regulation, rather than requiring legislation passed by Parliament, up to the end of 2021. The same would apply to government borrowing.

This report by The Canadian Press was first published March 23, 2020.