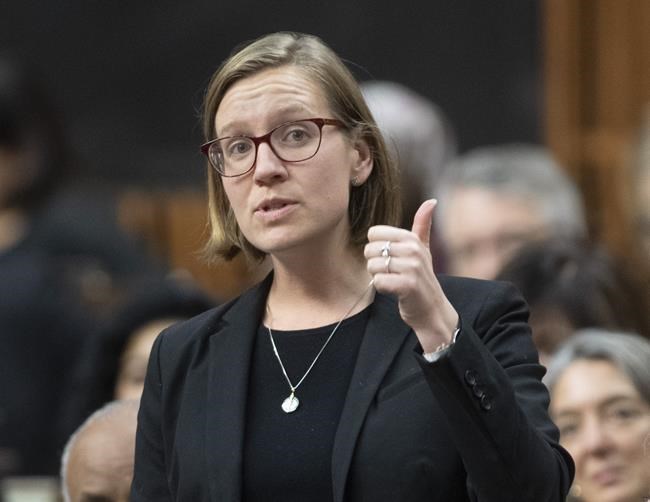 OTTAWA — Canada will spend millions to help the world's most desperate people fight COVID-19 because it is in the country's long-term security interest as well as being the right thing to do, says International Development Minister Karina Gould.

Gould says that's why Canada has earmarked $50 million, part of its response to today's launch of the United Nations COVID-19 humanitarian response plan.

In an interview with The Canadian Press, Gould rebutted criticism in some quarters that the government ought to be focusing instead on Canadians hunkering down at home to limit the spread of the novel coronavirus.

"The world is connected ... Whatever happens over there, far away, is something that can very easily come to our doorstep," she said.

UN Secretary-General Antonio Guterres launched a $2-billion global appeal Wednesday morning, calling for a co-ordinated response to help the world's war-torn, displaced and most destitute people, who are facing new misery because of the pandemic. The appeal is targeting the spread of the virus in South America, Africa, the Middle East and Asia.

Gould said the government needs to help Canadians at home with an $82-billion spending package, but it must also spend $50 million globally to protect Canada's future security and economic prosperity from a virus that knows no borders.

Gould didn't mention O'Toole by name, but she addressed the underlying sentiment of his tweet.

"It's a bit of an enlightened self-interest," Gould added. "We absolutely need to be thinking about the world's poorest and most vulnerable because if we're not thinking about them, we're also putting ourselves at risk."

Prime Minister Justin Trudeau spoke by phone on Wednesday to the presidents of Rwanda and Senegal and pledged "Canada's support through advice and international assistance" on COVID-19, said a statement from his office.

The government has earmarked $8 million of the $50 million spending package to groups such as the World Health Organization, the International Committee of the Red Cross and the United Nations High Commissioner for Refugees to help them fight the pandemic.

Gould said she is speaking with numerous UN agencies and other international organizations to target where the rest of the money should be spent.

There is no shortage of options, including the world's largest refugee camp in Bangladesh where 700,000 Rohingya exiles from Myanmar are crammed into squalid conditions and where preventative hand-washing and social distancing are next to impossible. There are also overcrowded refugee camps on Greek islands and in the Democratic Republic of Congo, and armed conflicts in Somalia, South Sudan, Syria and Yemen.

One message Gould said she is hearing is that there can be no cuts to current aid spending. Otherwise, the world could face outbreaks of diseases that have already been contained such as polio, tuberculosis and malaria. She also doesn't want to see money diverted from helping improve the sexual and reproductive health of girls and women.

Gould said many lessons can be learned from past African Ebola outbreaks. She noted that while the 2019 outbreak in Congo killed 3,000 people, another 6,000 children died from a measles outbreak that couldn't be contained at the same time.

Gould said she's stressing the need for "a fierce commitment" to preserving development and humanitarian programs in all her international conversations.

"If we were to take a step back from those, the collateral damage and the generation of children that could be left behind because of this is even greater than the risk that we face with COVID."

Gould said she's worried about how isolation and quarantines can lead to an increase in domestic and gender-based violence.

Rema Jamous Imseis, the UN refugee agency's Canadian representative, said Gould spoke with her organization's High Commissioner Filippo Grandi Tuesday about doing more for the Rohingya in Bangladesh, and the need to scale up responses to sexual and gender-based violence.

"Canada has already done quite a bit and we hope to see more coming from them when the appeal is launched," she said in an interview.

"We know that no matter what measures you take here, nationally, to prevent the spread of the virus, as long as you have situations around the world with weak health systems and an inability to cope with the demands that are placed on them with this pandemic, the virus knows no boundaries."

David Morley, the president of UNICEF Canada, said millions of uprooted children in war zones are dying from preventable causes and not getting essential vaccines.

"With COVID-19 cases hitting Syria and Gaza, it is only a matter of time before we see the spread throughout refugee camps and these vulnerable populations," Morley said.

UNICEF is concerned about refugee children on the Greek islands, where there are more than 41,000 refugees, including 13,000 children. A reception centre designed to hold 3,000 people has now swelled to 20,000, he said.

Though European borders are shut, Morley said UNICEF is stepping up its call to try to relocate children to Germany, Finland and other countries that have committed to take them.

"People in developing contexts care for their family members just like we do here," said Michael Messenger, the president of World Vision Canada. "We can focus both on responses here at home, as well the world's most vulnerable. That's the Canadian way."