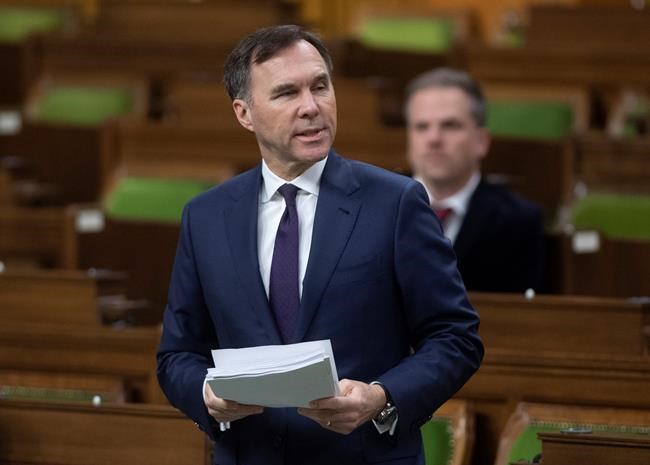 OTTAWA — The Liberals are repackaging two previously promised benefits for Canadians whose working lives are disrupted by COVID-19, a change that will almost double direct financial aid in the government's economic plan to $52 billion.

Combining the two benefits into one will mean a $2,000-a-month payment for up to four months to workers whose income drops to zero because of the pandemic, including if they have been furloughed by their employers but technically still have jobs.

"Companies don't need to separate their employee from their company. They just need to say, 'We can't pay you during this time period.' And when that happens, there is a direct wage subsidy to people, to employees so that they can actually live their lives," he said.

"When this is done, they can go back to work for their employers and that we think is critically important."

Affected workers would have to fill out an online application and meet a few conditions to qualify.

It would apply to any affected workers between March 15 and Oct. 3.

Over the last week or so, there have been almost one million new EI claims — far above the typical 45,000. Depending on how things go, the unemployment rate could jump as high as 11.7 per cent by the second quarter, TD Economics wrote in a report Wednesday.

Demand for the new benefit would have overwhelmed the decades-old EI system, the Liberals said Wednesday in a partial explanation for the spending change.

Prime Minister Justin Trudeau, speaking outside his Ottawa residence, said workers have been pulled in from other departments to boost the number of workers taking calls and processing claims to 13,000.

Morneau told the Senate that about 1,300 Canada Revenue Agency workers have been moved to call centres, and 1,000 more freed up from handling tax returns given the extended filing deadline.

"Public servants are working around the clock while dealing with unprecedented demand and all of the same personal stress everyone else is facing," Trudeau said in prepared remarks addressed to Canadians in general.

"They will get to your application. Help is on the way."

Previously, the Liberals proposed two benefits — one to flow through the employment insurance system and another for those who don't qualify for EI benefits, such as self-employed workers.

The original two benefits, along with a 10 per cent wage subsidy for qualifying businesses, were part of a package of $27 billion in direct spending and $55 billion in tax deferrals.

Now, direct spending will be $52 billion because the new benefit is being funded from general revenues, and not the EI fund covered by employee and employer premiums.

Morneau said the change in spending plans raises the overall value of the economic response to $107 billion from $82 billion.

He said more help would be announced for the oil and gas sector, airlines and the hospitality industry, but didn't say when.

TD senior economist Brian DePratto wrote in a note that the benefit should ease the burden on businesses, but there is still a need to help small- and medium-sized businesses.

"The pain that small- and medium-sized firms are feeling is intense," he wrote. "We hope that additional measures to ensure that furloughed workers' firms still exist after the pandemic-control measures are lifted will be forthcoming."

The government is aiming to have the new benefit, paid once a month, available starting April 6 with payments landing 10 days afterwards, meaning the first benefits won't arrive until the middle of April at the earliest. A $300 increase to the Canada Child Benefit lands in May.

Those getting EI benefits now would receive the new benefit, dubbed the Canada Emergency Response Benefit, if payments end before Oct. 3 and they can't go back to work due to COVID-19.

NDP Leader Jagmeet Singh, who this week called on the Liberals to provide $2,000 payments to all Canadians, tweeted that the "announcement isn't perfect, but it will help so many people."

"We need to work to get it to people as quickly as possible," he added.

The Canadian Federation of Independent Business called the new benefit a "significant step forward," but said it doesn't change the need to increase the 10 per cent wage subsidy to 75 per cent or higher as many business and labour groups have requested.

"CFIB is focused on measures that will keep the connections between workers and employers and not require layoffs," president Dan Kelly said in a statement. "This is imperative to ensure employees can go back to work the day after the emergency ends, allowing Canada's economy to return to normal as quickly as possible."