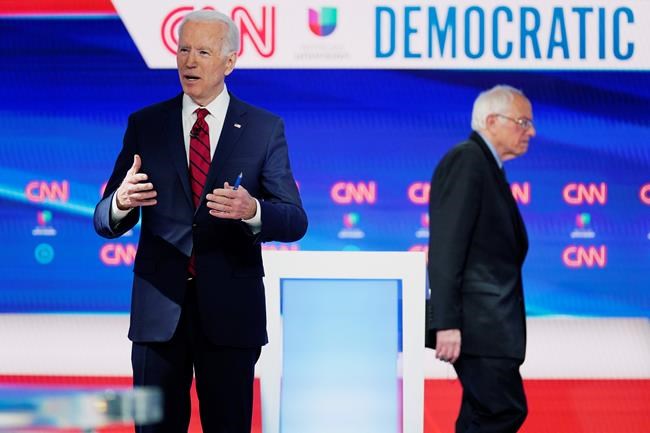 Weeks before Joe Biden launched his 2020 presidential campaign, he released a social media video to address allegations from women who said his uninvited displays of affection had made them uncomfortable.

“Social norms have begun to change. They've shifted,” said the former , then 76. Looking straight into a cellphone camera, he added: “I hear what they are saying. I understand.”

Kate Bedingfield, an adviser the same age as Biden's youngest daughter, was first to propose a direct-to-lens declaration. She joined forces with Anita Dunn, an alumna of President Barack Obama’s West Wing and relative newbie to Biden's orbit. Together with two of Biden's longest-serving confidants – Steve Ricchetti and Mike Donilon – they convinced the almost-candidate it was the right course.

When the boss was ready, Bedingfield held up her phone to record.

Those early days of spring 2019 portended a defining new reality for Biden: His innermost circle for decades was dominated by men, with the crucial exceptions of his wife, Jill, and sister, Valerie. But the 50-year political veteran has expanded his brain trust, and the cadre of women now included have helped shape — and even rescue — a campaign that has whipsawed Biden from early to disappointing afterthought and finally to prospective Democratic nominee.

“We don’t have a senior meeting on the campaign where women are not at least half the meeting,” said Bedingfield, the deputy campaign manager, who had joined Biden during his final years as Obama's . Biden, she said, is “cognizant of the fact that we bring different life experiences to the table, and that that is valuable,” while also seeing women and men as equals in presidential politics.

It's a vital dynamic for a politician whose career is marked by both successes and controversies where women are concerned, and also for his party, which again will nominate a man despite a historically diverse field that fueled many Democrats' hopes that a woman finally could win the presidency.

Accordingly, Biden has highlighted that women are leaders on his campaign and assured voters they would remain so in his White House. He pledged days before the South Carolina primary to make a black woman his first Supreme Court nominee. After taking complete command of the nominating fight over subsequent weeks, he named Democratic operative Jen O’Malley Dillon as his campaign manager and promised to select a woman as his running mate.

Biden had previously tasked Dunn, 63, with leading his campaign after an embarrassing fourth-place finish in Iowa last month. Dunn already had bonded with two other top women advisers: Bedingfield, 38, and Symone Sanders, 30, who came to the campaign as one of the party's most high-profile black women strategists. Dunn also recommended Biden make O'Malley Dillon, 43, his permanent manager.

That's a notable lineup for a man who came of age in a staunchly patriarchal era. He joined an all-male Senate in 1973. He's since authored the Violence Against Women Act, but also has been harangued over his handling of Anita Hill's accusations of sexual harassment against Clarence Thomas before his 1991 Supreme Court confirmation. Biden said that led him to recruit the first women to the Senate Judiciary Committee, though he's never personally apologized to Hill for anything he did as chairman, instead referring generally to how other senators treated her.

Dunn said it is Biden's “world view” to want women challenging him. But she and other women deflect credit for his campaign turnaround, pointing elsewhere, including at the men who remain fixtures.

“Successful campaigns are about addition,” Dunn said, “not subtraction.”

Indeed, while Dunn spent much of her time at Philadelphia headquarters before it was shuttered by the coronavirus, a trio of Biden's old-guard — Donilon, his speechwriter and ad guru since the early 1980s, and former chiefs of staff Ricchetti and Bruce Reed — comprised a mainstay with the candidate. Still, interviews with nearly a dozen Biden aides and allies made clear that women are a driving force behind the candidate and his campaign.

Women were in the room when Biden reversed his decades-long support for the Hyde amendment, a prohibition on federal money paying for abortions. They’ve helped soften his defensiveness about lingering criticisms over Hill. And women urged Biden to talk more openly about a debilitating stutter that he learned to manage as a boy, convincing him it wasn't a weakness, but a humanizing strength.

When Biden granted Dunn final decision-making authority after the Iowa caucuses, she moved quickly. She recruited O'Malley Dillon, who'd never worked directly for Biden, to oversee the Nevada operation. Sanders headed to South Carolina. Those states resuscitated a campaign Dunn said was “on the brink of collapse.”

Bedingfield and Sanders were especially vocal in pressing Biden to bail on New Hampshire when it became clear he'd lose badly there. They helped convinced him to visit South Carolina for a rally on friendlier turf before to Nevada.

In South Carolina, a day after a crucial second-place Nevada finish, Sanders engineered a private, spur-of-the-moment meeting between Biden and House Majority Whip Jim Clyburn, as the state's most powerful Democrat hosted a welcome reception for the Congressional Black Caucus. Days later, Clyburn delivered an emotional endorsement for his old friend, a move widely credited for turning an expected Biden victory into a romp and setting up his March surge.

Immediately after South Carolina, it was Dunn, Bedingfield and Sanders managing whirlwind negotiations with onetime rivals to rally behind the former heading into Super Tuesday. They ultimately orchestrated remarkable scenes in Dallas with Biden alongside Pete Buttigieg, Amy Klobuchar and Beto O'Rourke in a show of force the night before Biden won 10 of 14 primaries.

That consolidation of Democratic factions ended Bernie Sanders' hopes for the nomination.

None of this makes up for the fact that a woman won't be elected president this year. But Lily Adams, who worked for Democratic nominee Hillary Clinton in 2016 and Sen. Kamala Harris this cycle, said Biden’s approach is an important recognition of the moment.

“Usually, when there are the toughest odds, the most successful people who are ready to walk through fire are women, because in many cases they’ve faced down every obstacle, every amount of bias,” Adams said. “The importance of diversity in teams isn't just because it's the right thing to do, but also because it’s the smart thing to do.”

None of the women around Biden see themselves as supplanting anyone. Dunn said Jill Biden and Valerie Biden Owens are now elevated as “principals in their own right” — veritable extensions of the candidate. Bedingfield texts regularly with the candidate's wife.

Val, as Biden calls his sister, managed her older brother’s politics for decades, becoming the first woman to manage a modern U.S. Senate or presidential campaign. Biden still trusts Ricchetti perhaps more than anyone other than Jill or Val. And no newcomer matches Donilon’s comfort with Biden’s voice.

“The fact that he values relationships and loyalty,” Dunn said, “doesn’t mean he can’t establish new ones.”

Catch up on the 2020 election campaign with AP experts on our weekly politics podcast, “Ground Game.”