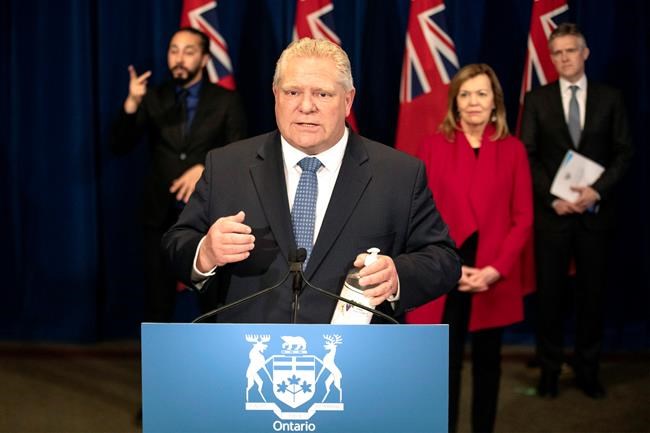 TORONTO — Ontario has introduced steep fines for price gouging and reduced the maximum size of gatherings as it works to curb the economic impact of COVID-19 while stemming its spread.

Premier Doug Ford announced Saturday that he was slashing the number of people allowed to gather at a time from 50 to five, and introduced major fines for companies involved in price gouging.

"There's very few bad apples in companies, but they're out there. And I think it's disgusting," Ford said. "How can you take advantage of people in this time? Times that we've never seen in our province or around the world. And there's actually opportunists out there, trying to gouge the people? I'm coming after them with a vengeance."

He made the announcement as Ontario's Ministry of Health reported 151 more cases of COVID-19, bringing the provincial total to 1,144.

Another patient with the virus died on Saturday, bringing the total number of deaths to 19. That number includes two people who are not confirmed to have had the virus but are linked to an outbreak at a long-term care home. Medical officials say 63 people are currently in intensive care in hospital.

Ford said his efforts to prevent the artificial inflation of prices for products such as hand sanitizer and disinfectant wipes include fines for company heads as high as $500,000 and a year in jail.

Corporations involved in gouging could face fines as high as $10 million, Ford said.

He urged Ontarians to report any cases of price gouging to a provincial hotline, saying each report would be looked at on a case-by-case basis, and that the focus would be on products sold at five or six times the normal price, rather than a few dollars more.

The measures come days after Ford took specific aim at specialty foods store Pusateri's, which had been charging $30 for Lysol disinfecting wipes. The product had been in short supply elsewhere.

Pusateri's apologized, saying it was a mistake and that anyone who bought those wipes can get a full refund.

As for the smaller sizes of gatherings, Ford said there would be some exceptions.

Up to 10 people will be allowed to gather at funerals, and child-care centres looking after the kids of front-line workers can have up to 50 people on site. There's also an exception for households with more than five people.

Meanwhile, the province's top public health official said they're making steady progress in the number of tests they're able to complete per day.

Dr. David Williams, chief medical officer of health, said the province was able to complete about 4,100 tests per day, just shy of a goal for 5,000 tests which was set for the end of this week.

"We're getting close to that number," Williams said.

Dr. Barbara Yaffe, deputy medical officer of health, said they're aiming to have the capacity for close to 19,000 tests per day by mid-April as new testing centres open.

"As we add new labs, they have to go through testing to ensure that their tests are valid," said Yaffe.

"So the first 500 tests that each lab does has to be verified by the Ontario Public Health Lab," she said.

The province has also been making headway on a backlog of people waiting to be tested. Earlier in the week, there were over 10,000 cases that remained under investigation, but that number has since dropped to about 8,700 tests by Saturday evening.

This report by The Canadian Press was first published March 28, 2020.