The latest developments on COVID-19 in Canada 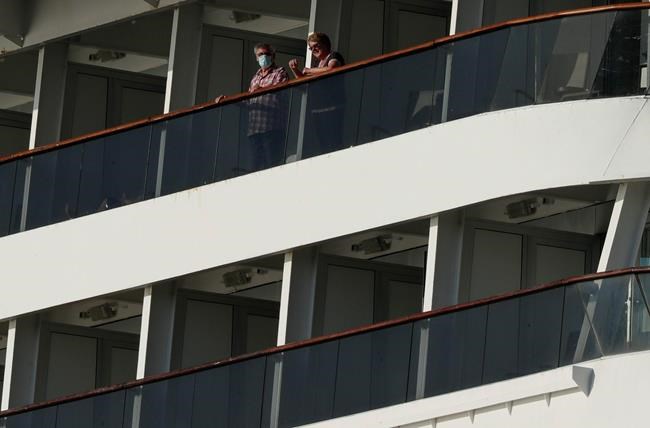 The latest news on the COVID-19 global pandemic (all times Eastern):

Ontario is now restricting gatherings of more than five people.

There are a few exceptions, including for households with more than five people.

Child-care centres looking after the kids of front-line workers will be allowed to have a maximum of 50 people.

There's also an exception for funerals, which will allow up to 10 people at a time.

The province had previously restricted gatherings to a maximum of 50 people.

Foreign Affairs Minister Francois-Philippe Champagne says the MS Zaandam cruise ship will be allowed through to its final destination.

There are 248 Canadians stranded aboard the ship off the coast of Panama, where some passengers have tested positive for COVID-19 and four people have died.

Champagne says his Panamanian counterpart has confirmed that the Zaandam will be allowed through the Panama Canal to get to its final destination of Fort Lauderdale, Fla.

She was diagnosed with COVID-19 on March 12 after returning from the U.K.

The diagnosis sent her and her family, including Prime Minister Justin Trudeau, into self-isolation in their Ottawa home.

Alberta is reporting 79 new cases of COVID-19, bringing the provincial total to 621.

That total includes two deaths linked to the virus.

The provincial epicentre appears to be the Calgary area, which is reporting 378 cases.

Ontario is cutting some of the red-tape in long-term care homes during the COVID-19 pandemic.

The province says it's removing certain administrative and regulatory requirements to free up staff for more direct care.

It says it's redeploying inspectors to help with "critical areas of need" — a measure it says was also taken during the SARS pandemic in 2003.

Ontario is reporting that another COVID-19 patient has died.

That brings the total number of deaths linked to the virus in the province to 19.

But health officials aren't reporting any new cases since their update earlier in the day.

They say there have been 1,144 cases in the province, including those who have died and eight people who have recovered.

Saskatchewan is reporting 30 new confirmed cases of COVID-19, and officials say there's been a large increase in cases connected with a snowmobile rally held earlier this month.

The province says in a news release that the new cases bring the total number in Saskatchewan to 134.

On Wednesday, health officials warned anyone who had attended the Lakeland Snowmobile Club Wilderness Rally Supper on March 14 between 2 p.m. and 10 p.m. to immediately self-isolate, following news that a person who was at the rally tested positive for COVID-19.

The province now says 18 cases in total have been linked to the event, and all of them are self-isolating at home.

The company in Kingsville, Ont., was originally approached by public health officials about its surplus of double-sided tape and foam.

But when the Ontario government closed non-essential businesses to help stop the spread of COVID-19, the firm was asked to change its production.

There are 20 new cases of COVID-19 in Nova Scotia, including two related to long-term care facilities in the province.

The announcement brings the total number of cases in the province to 110.

An employee at R.K. MacDonald Nursing Home in Antigonish has tested positive, as has an employee at Lewis Hall, a private retirement living community in Dartmouth.

The province says all residents, their families and staff at both facilities have been notified, and there are no cases of COVID-19 among residents of long-term care facilities at this time.

Provincial health officer Dr. Bonnie Henry says 81 people are hospitalized, including 52 in intensive care, and there has been one additional death.

She says cases are continuing to increase among people who have been exposed in the last two weeks, and physical distancing remains critically important.

Henry says on a positive note, nearly 400 people have recovered from the disease in B.C.

Newfoundland and Labrador health officials are expressing concerns due to its first case of community transmission of COVID-19.

Chief medical officer of health Dr. Janice Fitzgerald says a patient admitted to a hospital in St. Anthony, N.L., was among the 18 new cases announced on Saturday.

Fitzgerald describes the case as a significant development because the patient had no history of travel or exposure to a known case of COVID-19.

Her announcement has brought the total number of cases in the province to 120, the second highest level per capita in Canada.

The province says in a statement the new cases are under investigation and "further details will be forthcoming."

The province also announced a special line for health-care workers to call if they have symptoms of COVID-19.

Manitoba is announcing an additional 25 probable cases of COVID-19 on Saturday, bringing the total number of lab-confirmed positive and probable positive cases in the province to 64.

The total number of deaths reported in Manitoba from the virus remains at one.

Ontario Premier Doug Ford says he is looking to limit gatherings to no more than five people.

The province is currently limiting gatherings to 50 people and he says a decision could be coming later today.

He says exceptions can be made in special circumstances like in funeral homes, where they could have small groups of people come into the event at a time.

Quebec is reporting 2,498 confirmed cases of COVID-19 in the province and four more deaths, bringing the provincial tally to 22.

Deputy Premier Genevieve Guilbault is also announcing police checkpoints as of this afternoon in eight regions outside of major Quebec cities where the population is deemed more at risk.

Guilbault says only essential travel will be allowed in those regions and says Quebec provincial police have also set up checkpoints near the Canada-U.S. border to intercept snowbirds coming back to Quebec to ensure they understand there's a 14-day quarantine.

Guilbault says out of 164 people hospitalized, 57 people are in intensive care.

Ford says company directors found to be involved with price gouging could face fines up to $500,000 and a year in jail.

He says corporations could face a fine of up to $10 million.

Ford is urging the public to contact the provincial government if they see corporations unreasonably raising prices.

Ontario has announced 151 new cases of COVID-19, bringing the total number of cases in the province to 1,144.

The Ministry of Health says the number of deaths from the virus remains at 18, and eight cases have been resolved.

The ministry says more than 8,000 investigations into the virus are still pending.

About three per cent of cases have required critical care, and about one per cent have been fatal.

She notes that about 30 per cent of people hospitalized are aged 40 and under.

Tam says health officials will keep a close eye on trends of the severity of the disease for signs that more vulnerable people are being affected or that the health system is being overwhelmed.

Prime Minister Justin Trudeau says anyone showing symptoms of COVID-19 will not be allowed to board domestic flights and trains.

He says those measures will take effect Monday.

Trudeau made the announcement in his daily news conference in Ottawa.

Global Affairs Canada says a Canadian citizen who was on a cruise has died from complications related to COVID-19 in Brazil.

A spokesman says its thoughts are with the victim's family and that the news has saddened the department.

Global Affairs says it will not provide further details for privacy reasons.

Michael Kasprow is terrified for his 81-year-old mother who is stuck on board a cruise ship where four people have died and several others have tested positive for COVID-19.

He says his mother is healthy and is scheduled to be transferred to the Zaandam's sister ship soon, but it remains unclear where it can dock.

The company that runs the ship says all ports are closed and nearly 150 people have flu-like symptoms.

The federal government says it is working with its counterparts in Panama and a cruise line to get more than 200 Canadians home.

Holland America says two people aboard its ship, the Zaandam, have tested positive for COVID-19 and four others have died.

Global Affairs Canada says 247 Canadian passengers and one Canadian crew member are on the ship that is anchored off the Panama coast.